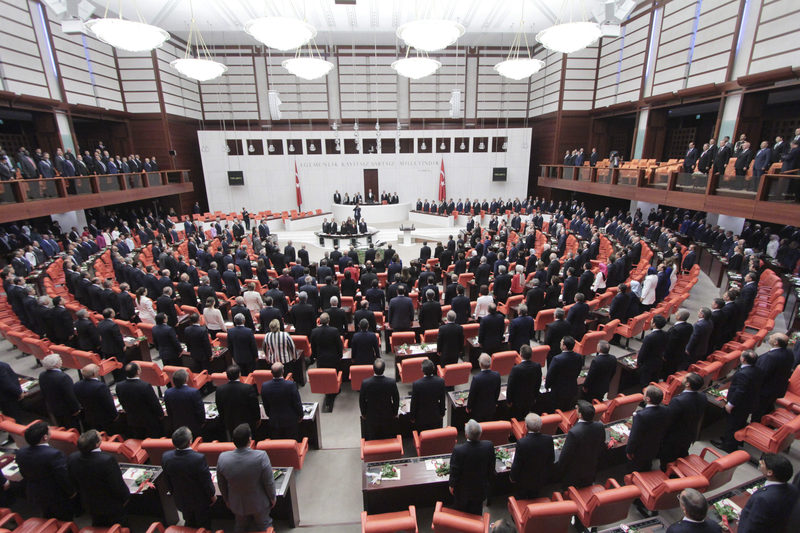 by Daily Sabah Jul 06, 2015 12:00 am
Early elections loom as none of the parties have heretofore hammered out a solution to their differences. The official negotiations are yet to commence with President Recep Tayyip Erdoğan to assign Prime Minister Ahmet Davutoğlu with the task. But taking into account the current pessimistic atmosphere, it will be difficult for the interim prime minister to make a deal to forge a government, despite his recent enthusiasm for a coalition.

The Republican People's Party (CHP), which has been favoring a coalition government that consisted of the Nationalist Movement Party (MHP) and the Peoples' Democratic Party (HDP) since the elections, now has the possibility of forming a government with the Justice and Development Party (AK Party), but the chances of a partnership are low.Shortly after HDP Co-Chair Selahattin Demirtaş said the possibility of a coalition is far due to a lack compromise between the parties, the leader of the Republican People's Party (CHP), Kemal Kılıçdaroğlu said on Sunday that he too considered the chances of forging a new government were slim and that the "odds are high for snap elections." The MHP, which has been the main cause of the deadlock in forming an alliance due to its rigid principle of "never being part of a plan that involves the HDP," has been mentioning the option of new elections since the June elections, which gave neither party sufficient power to lead alone.

HDP Co-Chair Demirtaş expressed reservations over a possible coalition last Thursday, saying there is a slim chance of forging a coalition amid the lack of compromise between the parties. He said even if the formation of a coalition is accomplished, "it will never be durable." Demirtaş, who has purportedly shunned snap elections so as not to risk the votes that brought the HDP over the 10 percent election threshold and assisted his party's entrance into Parliament, for the first time said "a new election is required for things to be on track."

Turkey has been plunged into the uncharted territory of a hung parliament since the June 7 elections, during which none of the parties have managed to receive enough seats to lead single-handedly. The uncertainty has not been utterly alleviated since then, but before the official negotiations, the wind of snap elections have blown, with no compromise in sight.Since the elections, the MHP has been against any plan that involves the HDP, which received 80 seats in Parliament, like the MHP, passing the 10 percent election threshold. The MHP's intransigence has dashed Kılıçdaroğlu's hopes of forming a coalition between the CHP, MHP and HDP. The MHP, equating the HDP with the outlawed PKK, left Kılıçdaroğlu with the only option of forming a coalition with the AK Party to form a government. Although he said they were open to negotiations with the AK Party, the conditions stipulated by the CHP, which include a rotating Prime Ministry, and that the prime minister be him, could prevent an agreement between the two parties. MHP leader Devlet Bahçeli retained his stance on the first night of the elections and said the party preferred to be in opposition. With this, the options of two likely partnerships for now have been shelved.
Last Update: Jul 06, 2015 8:02 pm
RELATED TOPICS