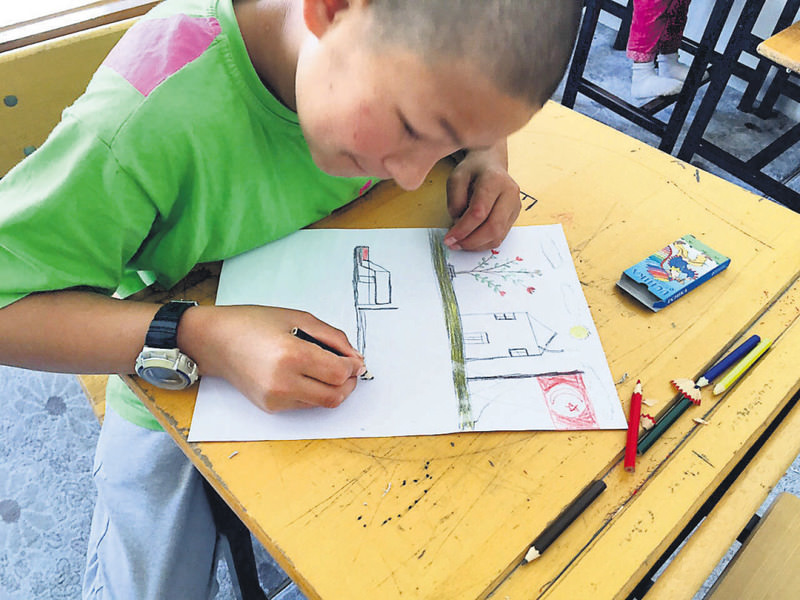 The Uighurs who fled Chinese oppression Xinjang are finally breathing easy after reaching Turkey, which was eager to receive them. The newly arrived Uighurs, who suffered from ethnic and religious discrimination have been settled in Kayseri province

Following long-lasting diplomatic negotiations with Thailand, Turkey brought 173 Uighurs who were kept in detention by the Thai government, to Kayseri on July 1. In efforts to hear their story first hand and observe their current living situation in Turkey, Daily Sabah paid a visit to lodgings temporarily provided by the government in Kayseri. Speaking to more than four families, each one of them expressed their gratitude and want Turkish citizenship in order to provide education for their children.

Due to the efforts of the vice president of the World Uyghur Congress, Seyit Tümtürk and Kayseri municipality, Uighurs escaping Chinese oppression have been temporarily placed in lodgings containing 100 apartments. During a conversation with the official at the housing facility, he told Daily Sabah that a small village will be created for the newly arrived Uighurs to start permanent lives in Turkey.

The official at the lodging said that 900 Uighurs are currently living there and a minimum of 10 people live in one apartment. Prior to beginning a conversation with the first family that was held at the immigration detention center in Thailand, they asked us not to use their names or publish their photos due to security reasons. Almost all of the Uighurs in Turkey still have families in China so they are concerned that their family members' lives might be threatened by Chinese authorities.'Our children attaining an education and serving Turkey is our priority'

Although the Chinese government has a one-child policy, A.B., 45, has four children. Beginning to tell his story, A.B. said he was running an electronics business in China. He said that he was imprisoned there twice, in total for six years. When asked about the reason, he said that it was because he is a Muslim who practices his religion. Explaining his jail time in China, A.B. said: "They disrupted our psychology; they forced us not to sleep for more than four days. They tied down our hands and feet and did not let us practice our religion. With our situation toughening, in December 2013, we decided as a family to escape the oppression."

Starting their difficult journey from China to Cambodia, he said that he had to pay $1,500 per person to smugglers, then from Cambodia to Vietnam, they paid another smuggler, and in Thailand they paid once more, but he said they were relieved once they arrived in Thailand due to the difficult journey. As more than 28 people, including children, had to hide in Thailand for 10 days without food or any shelter, he said that the ground became their bed and the sky became their blanket. He further added that they all walked more than five hours from Vietnam to Thailand. When asked if there were any casualties, he said that a four-year-old child died due to infection.

They were jailed once more in Malaysia where he said there were many other asylum seekers from other countries. Due to the severity of the situation in Malaysian jails, he said that people of other nationalities died and that he was also nearly dead. When asked what he wants from the Turkish government, he said he wants citizenship so their children can attain an education and serve Turkey as well as their own.

Traveling on the same route as A.B., M.G., 23, is one of the recently arrived Uighurs from a group of 173 people, including women and children. M.G., who had to travel with her six children without her husband, said she was imprisoned for more than 15 months in Thailand with her children. Due to the difficulty of her situation in the Thai jail, her and the children's psychology has been damaged. She laughs when telling about her tough journey, walking 10 hours at night and once falling off a cliff and breaking her leg.

Her children, on the other hand, are trying to adapt to their new life in Kayseri, but are still shocked by their tough journey to Turkey. M.G. was pregnant at the time and her husband traveled to Turkey before the rest of the family. He said that they want Turkish citizenship so they can send their children to school and provide them a better life in Turkey. When asked about his journey to Turkey and if there were any casualties, he said that about four children died from various causes ranging from infection to being shot at. Additionally, though they safely arrived in Turkey, they said that part of their hearts is in the Thai jails and asked for Turkish government to help the remaining Uighurs to come to Turkey.

Two women whose husbands were killed also said that their inability to practice their religion openl, and being oppressed for being Muslim caused them to escape to Turkey. Living in Turkey for three years, Mihrigül, 25, who has three children, said her husband was first jailed by Chinese authorities but became ill shortly after he was released and passed away. She also traveled along the same route with her children and was imprisoned with them in Thailand. Her friend, whose husband died when escaping through Pakistan, wants to provide her children with a good education so they can manage their lives in the future.

Nefise, who traveled along a different route with her four children, told of her rough route to Turkey, saying that they walked for nearly 20 hours with no food and no money. When crossing from Iran to Turkey, she said that the snow was above her waists and she was wondering whether she and her children would die. At the Iran-Turkey border she says that they were under heavy shelling by the Iranians, but escaped with no casualties. It has now been seven months since she arrived in Turkey and said that her days here are heavenly.

Wearing a headscarf in public, including on public transportation and when getting married in a religious ceremony, was banned for Uyghurs in 2014, with fines of about $353 for wearing a headscarf in public. According to a Uyghur Human Rights Project report, 700 people were killed due to political activities last year. The number of those arrested increased 95 percent compared to the previous year, reaching 27,000. The number of those sentenced to execution or life imprisonment has increased 50 percent in the last six months. Chinese officials continue to censor media in the region, as in other parts of China.
Last Update: Jul 08, 2015 6:56 pm
RELATED TOPICS