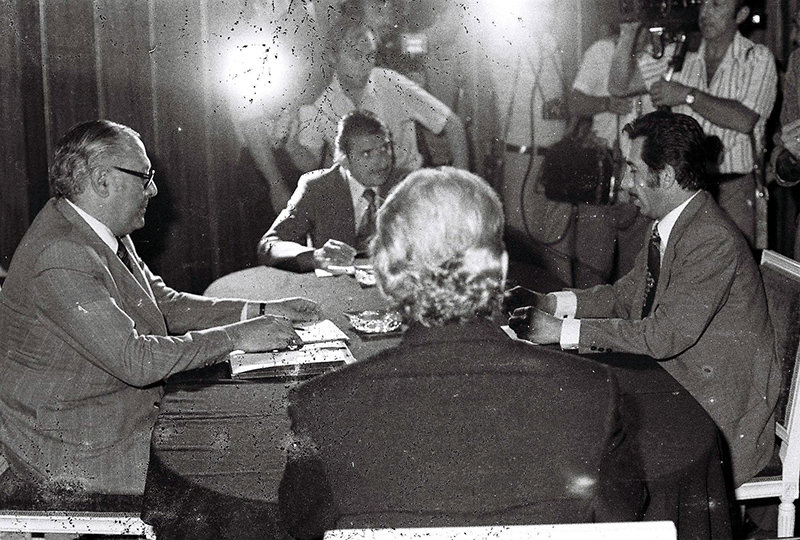 1983 Cyprus invasion revealed through secret papers
by Anadolu Agency Jul 07, 2015 12:00 am
An armed confrontation between Greek and Turkish soldiers on the island of Cyprus was a real possibility as recently as 1983, declassified documents have revealed.

Papers released in London show that Greece's then Prime Minister Andreas Papandreou was prepared to send troops to divided Eastern Mediterranean island after the Turkish community unexpectedly declared an independent state in the north.

He made the offer of military support to Spyros Kyprianou, the then leader of the Greek-Cypriot administration, at an emergency meeting in Athens just hours after the Turkish Republic of Northern Cyprus (TRNC) was proclaimed on November 15, 1983.

A memo of their conversation is one of a number of Foreign Office documents that were made public last week.

"He [Kyprianou] had been told that if he felt that Greek troops should go to Cyprus, and he so requested, the Greek Government was ready to meet his request," the declassified note said.

Kyprianou was worried that if Greece's offer of military assistance was made public there could be "great difficulties" that could cost him his job, adding: "It might appear that Greece was prepared to go to the bitter end."

The note continued: "If the news leaked that the Greek prime minister had offered to send troops to Cyprus - and [Kyprianou] then had to say that he was still studying the offer - he would be forced to resign."

Thatcher is recorded as commenting that such action would be "a very big decision" and that "the hazards of military intervention should be avoided".

According to James Ker-Lindsay, a senior research fellow on politics in southeast Europe at the London School of Economics, the declassified documents offer an insight into events following the Turkish Cypriot declaration of independence, which came after eight years of failed negotiations following a Greek-Cypriot coup in 1974 and subsequent Turkish military intervention.

"It is a terribly interesting revelation about potential Greek troops but it doesn't quite stack up," he said.

"[Papandreou] was hawkish, no doubt about it, but a military response seems to be a very odd reaction. What did he want to do with the troops - to go and take back the north or to keep them in the south?

"I think Kyprianou was using it to increase the pressure on London to act - which they clearly already were by lobbying other countries not to recognize the TRNC."

Kyprianou's decision to keep Greece's offer of military support secret may have prevented the deployment of Greek troops on the island's south. Turkish troops have been stationed in the north since 1974.

"There was a strong feeling in Greece that, following Greece's inadequate response to the events of 1974, inaction or indifference on the part of the present Greek government would not be tolerated by public opinion," reported the note of the meeting between Kyrianou and Thatcher two days after the TRNC was declared.

It continued: "[Kyprianou] was not suggesting that the Greeks felt stronger than the Greek-Cypriots but if the quick reversal of the Turkish-Cypriot move was not achieved, it was apparent from his talks with the Greek government that they were seriously considering severing diplomatic relations with Turkey."

The new-born republic in northern Cyprus was heralded by Rauf Denktaş, the founding president, as giving Cypriot-Turks equal status in negotiations over Cyprus's future.

But only Turkey offered diplomatic recognition to the fledgling country while the outside world rallied behind a swift UN Security Council resolution that called the declaration of independence "legally invalid."

The declassified papers also revealed several nations were preparing to recognize the TRNC - something that caused concern in Britain, the island's former colonial power. The concerns were great enough for the foreign secretary of the time, Geoffrey Howe, to instruct British diplomatic missions to lobby six Muslim-majority countries against recognizing the new state.

In a diplomatic note sent to British ambassadors in Pakistan, Saudi Arabia, Jordan, Malaysia, Libya and Bangladesh on Nov. 18 - a day after Kyprianou's meeting with Thatcher - he wrote: "Unless you consider it would be counterproductive to do so, please approach the government to which you are accredited at a time you consider appropriate and encourage them not to recognize a 'Turkish Republic of Northern Cyprus'."