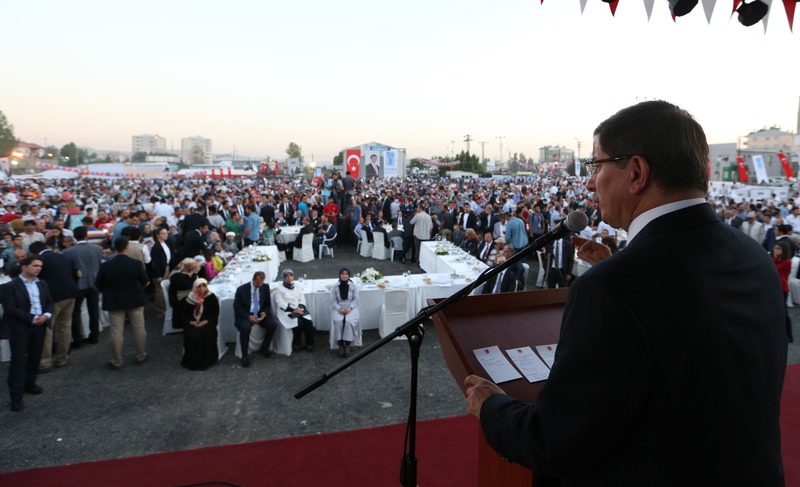 | AA Photo
by Daily Sabah Jul 07, 2015 12:00 am
Prime Minister Ahmet Davutoğlu said the killing of Turkish police officer in Siirt will not go unpunished as he condemned the terrorism at an iftar program on Tuesday in southeast Turkey's Van province.

Early on Tueasday, a police officer was killed in a clash between suspected smugglers and the police in Turkey's southeastern province of Siirt after a vehicle was stopped by police over smuggling suspicion.

Emphasizing that nobody should stay silent over the attacks in Siirt, Davutoğlu stated that "those who talk about peace, freedom and human rights should also show their stance about disarmament. Every illegal weapon carried in Turkey is a possible attack to peace in this country."

Speaking on the government formation process, the Turkish PM said that the coalition negotiations with other political party leaders will begin next week without any delay and assured Turkish people that the current government will continue working until the new government is formed.

In Turkey's June 7 general elections, the ruling Justice and Development Party (AK Party) received 40.66 percent of the votes, thereby claiming 258 seats in the Parliament, just 18 short to form a simple majority government. Since then, Turkey has been puzzled with coalition options.

As none of the four parties that passed the 10 percent electoral threshold-the AK Party, the Republican People's Party (CHP); the Nationalist Movement Party (MHP) and the pro-Kurdish Peoples' Democratic Party (HDP) - had the majority necessary to form a single-party government, they are forced to negotiate to form some type of coalition following the opening of parliament with the ceremonial oath-taking by MPs later this month.

A new government must be formed within 45 days following the president's request, in line with Turkey's constitution. In the case that parties fail to establish a government, Turkey will have to hold early parliamentary elections.