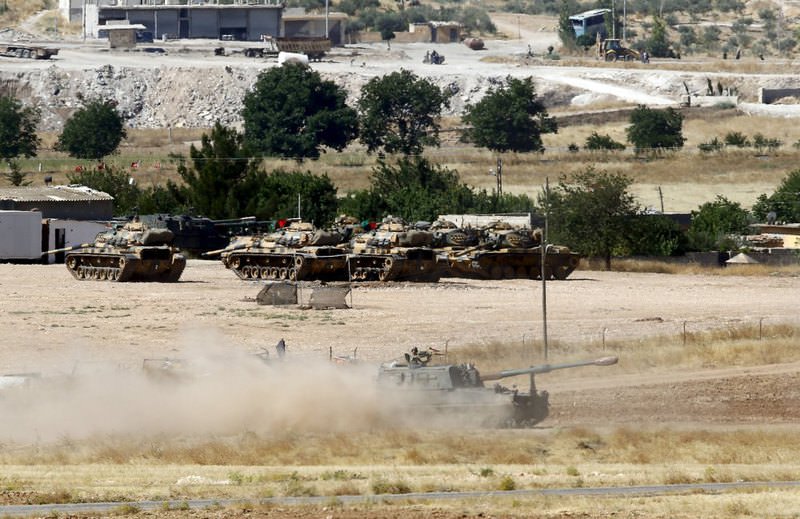 A large U.S. delegation including military and intelligence officials visited Ankara on Tuesday to meet with Turkish officials to discuss regional developments that have prompted Ankara to adopt tight security measures along its border with Syria

U.S. Under Secretary of Defense Christine Wormuth, Special Presidential Envoy Gen. John Allen and a large U.S. delegation including military and intelligence officials visited Ankara and met with high-level Turkish officials from the Foreign Ministry, Turkish Armed Forces (TSK) and the National Intelligence Organization (MİT) on Tuesday. The visit came after Turkey demonstrated its commitment to take all necessary measures including a military operation to secure its border with Syria from the increasing threat posed by the Islamic State of Iraq and al-Sham (ISIS) and another refugee influx. Ankara's concern about mass displacement of Turkmens and Arabs as a result of the Kurdish Democratic Union Party's (PYD) People's Protection Units (YPG) toward Tal Abyad in Syria to drive out ISIS was one of the main issues discussed. In recent weeks, top Turkish officials, including President Recep Tayyip Erdoğan, voiced concerns about this, claiming coalition forces conducting airstrikes in the region to push back ISIS seem like they are targeting Turkmen and Arab Syrians who are forced out of their homes due to the clashes.

According to information obtained by the Disaster and Emergency Management Agency (AFAD), there are currently 24,000 Arab and Turkmen Syrians who have fled the region and crossed into Turkey.

However, recent developments signal that Turkey's concerns on the issue seem to be understood by U.S officials. Last week U.S. Ambassador to Ankara John Bass said the U.S. has forwarded Turkey and the U.S.'s mutual concerns about preserving Syria's territorial integrity to the PYD after the group took control of territory in Syria from ISIS. Prime Ministry sources also share a similar view. "We observe that coalition forces are more sensitive toward Turkey's concerns. This development pleases us," a high level source from the Prime Ministry said on Tuesday.

The use of the İncirlik Air Base in Adana province for military strikes against ISIS by coalition forces was another issue U.S. and Turkish officials discussed. The İncirlik Air Base has been subject to intense negotiations between Ankara and Washington for a long time, but an agreement is yet to be reached. However, according to sources, Turkish and U.S. officials were close to a deal after talks on Tuesday for the deployment of U.S. warplanes to İncirlik as part of efforts to degrade and destroy ISIS in Syria and Iraq. Accordingly, Ankara principally agreed to open the air base for coalition forces for operations that are mutually planned by the U.S. and Turkish military.

The creation of a safe zone was also at the top of the agenda of Turkish officials. Turkey has long called for the creation of a safe zone inside Syria to protect its borders and provide some protection for refugees fleeing both Syrian regime forces and ISIS militants who have seized swathes of Iraq and Syria, but the U.S administration has yet to endorse the idea. On the other hand, Pentagon officials reported last month that U.S. military contingency plans have been drawn up for a safe zone in consultation with Turkey. More recently, presidential spokesman İbrahim Kalın made clear with his statement last week that Turkey is considering the establishment of a safe zone inside Syria, but would not make any moves without consulting with its allies. "When it comes to Syria, we have said from the beginning that we would act together with the international community and that we would not take unilateral action," Kalın said last week. Sources indicated that in the closed-door meeting U.S. and Turkish officials narrowed their differences on the safe zone without providing further details.

The train-and-equipment program for moderate Syrian opposition forces and ideas to overcome operational obstacles in the program was also discussed. After months of discussion, the program was started in Turkey's Kırşehir province, however, U.S. officials recently reported the program is moving slower than expected due to complications vetting volunteers and bringing them from Syria for training. Moreover, Turkish media outlets recently reported that dozens of moderate opposition fighters have withdrawn from the program after they refused to sign a contract guaranteeing that they would not fight against the Syrian regime. Many Syrian volunteers prefer to use their training to fight both ISIS and forces loyal to Syrian President Bashar Assad, which was the original target of the revolution before it got complicated. Reportedly, about 100 Syrian fighters were undergoing training in Kırşehir province, but the program was aiming to train up to 2,000 fighters by the end of the year. Sources also said that in order to revitalize the program, Ankara suggested U.S. officials remove the condition to not prioritize Assad's forces and provide air protection with airstrikes while they are fighting on the ground.