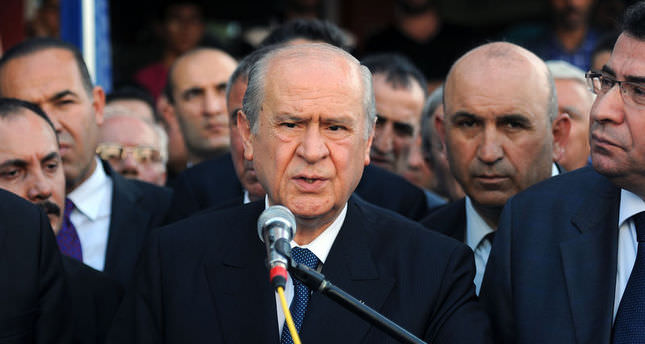 by Daily Sabah with Agencies Jul 08, 2015 12:00 am
Nationalist Movement Party (MHP) chairman Devlet Bahçeli played down the attacks on Asian tourists by young party supporters who protested China's restrictions on Uighur Turks by saying both have slanted eyes and thus could not be "differentiated."

"It does not matter that Koreans were recently targeted by ultranationalists on the supposition that there were Chinese because both ethnicities "have slanted eyes" Bahçeli said during an interview with daily Hürriyet. He claimed that the attackers were young people and could easily be dragged to do things.

Bahçeli also said, "It is easy to provoke a few people," refusing to condemn the recent wave of ultranationalist attacks in Turkey.

Insisting on the difficulty of distinguishing between small differences, he gave an example from music beside the racial one.

"For instance, the Grey Wolf gesture [of Turkish nationalists] is very similar to the heavy metal gesture. There is a small difference between the two," he said.

As anti-China protests spread around Turkey, Beijing issued a travel warning to its citizens on July 7, stressing that some tourists had been "attacked and harassed."

Bahçeli's remarks stirred a heated debate on Turkish social media on July 8 with some commentators claiming that they amounted to racism, while others sarcastically shared pictures to guide Turks in recognizing the facial features of various Asian countries.

Istanbul police launched an investigation after a MHP-linked youth organization reportedly attacked a group of Korean tourists in Sultanahmet Square on July 4, following a march to protest China's restrictions on the religious freedom of ethnic Uighur Muslims in Xinjiang.

Three days before the attack, a Chinese restaurant in Istanbul was vandalized by ultranationalists, although its owner was a Turk and its cook was a Uighur.

In January, Turkey has accepted over 500 Uighur Turks, who sought refuge in the country.