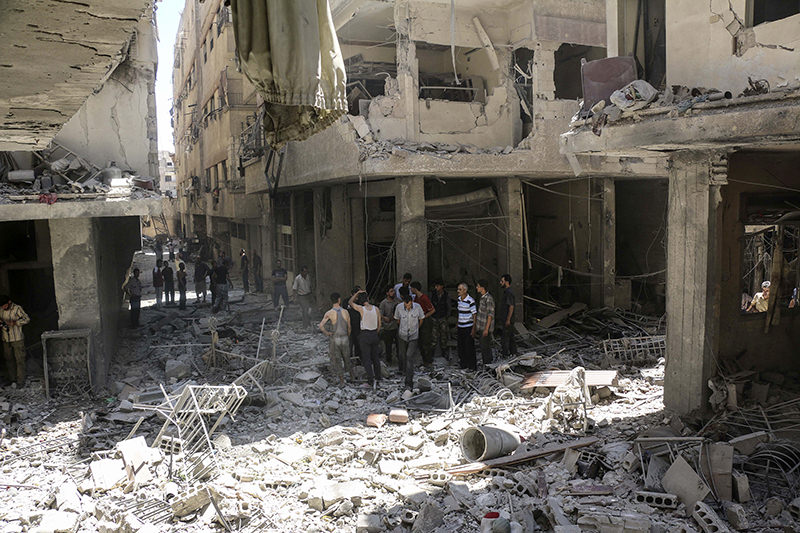 | AA Photo
by Anadolu Agency Jul 08, 2015 12:00 am
"The civil war in Syria ruined everyone; first Syrians themselves, and then us, Afghan refugees," says 27-year-old Sohrab Barati.

"We are told Syrians have priority. The United Nations, Europe and the United States are looking at us differently now. They no longer accept our refugee applications because they want to help Syrians," Barati tells an Anadolu Agency reporter in Istanbul's Zeytinburnu district-an area which hosts many immigrants and transient refugees from countries such as Afghanistan, Somalia and Iran.

Barati, one of thousands of Afghan refugees living in Turkey, has been anxiously waiting for years to be resettled to European or North American countries.

Ever-increasing numbers of Syrian refugees, however, have dented what little hope Barati and many others like him had to make such a move legally as states and international agencies appear-to them-to prioritize helping those fleeing the conflict in Syria.

The United Nations Refugee Agency (UNHCR)'s 2014 Global Trends report shows that Afghanistan held the top spot as the source of most refugees until 2014 when Syria overtook it.

There are about 3.9 million Syrian refugees spread over 107 countries, according to the UN agency. More than 1.7 million of them are living in Turkey. Under the agency's mandate, there are about 2.6 million Afghan refugees, living mainly in Pakistan and Iran.

However, Iran has become an unwelcoming place for Afghan refugees. Barati, who lived in Iran's Shiraz province from 2007 to 2009, fled to Turkey illegally because of what he calls the worsening atmosphere in Iran.

"Afghan refugees have no rights in Iran. We could not get treatment at hospital. They would not even let us use public buses," Barati claims.

The report slammed Iran for violating its legal obligations to protect Afghans from abuse. Human Rights Watch said: "Iranian forces deport thousands of Afghans summarily, without allowing them the opportunity to prove they have a right to remain in Iran, or to lodge an asylum application."

Facing a bleak future and hostile environment in Iran, some Afghan refugees crossed into Turkey illegally as a temporary stop on their way to Europe or to seek refugee status at the UN agency in Turkey for re-location.

Taner Kılıç, a lawyer and chairman of Amnesty International Turkey's Board, says the number of Afghans crossing into Turkey from Iran during the second quarter of 2012 increased 1,500 percent compared to the same period in 2011.

The UNHCR was overwhelmed with the number of applications and had suspended considering Afghan applications, Kılıç says. The UN told Anadolu Agency that, due to the increase of asylum seekers in the last three years, there is a long waiting period.

Sema Karaca, who frequently writes on refugees and is a former member of the Ankara-based International Strategic Research Organization, said that the UNHCR effectively ended considering Afghan refugees' applications from 6 May 2013.

"Applications by non-Afghans can be completed within two years. When it comes to Afghans, it is an open-ended process that may take many more years," Karaca tells Anadolu Agency.

The refugee agency told Anadolu Agency that it prioritizes vulnerable cases and disputed the existence of unreasonably long waiting periods in the application process, but did not comment on Afghan refugees' cases or their complaints.

Out of frustration over the long waiting period, some Afghans staged a protest on 13 April 2015 outside of the refugee agency's Ankara headquarters to draw attention to their plight.

Karaca and Kılıç stated that the uncertainty they face has caused psychological problems among Afghan refugees.

"They have been waiting but they do not know what they are waiting for. As they become desperate, some tried to cross into Europe illegally," Kılıç says, adding: "They are alone with their problems."

Even Karim Atassi of the UNHCR has described the plight of Afghans a "silent crisis and emergency".

Amid his despair, Barati still has some hope; his application has been picked up by the United States.

"I had my first interview with a Turkish official in 2012 and then six months later I talked to American officials. For three years, I have been waiting a reply from them whether they accepted my application or not," Barati says. The thought that his application is being considered by the U.S. gives him hope.

He claimed their status was better before the Syrian crisis. "The [UN] refugee agency was able to process our applications and re-locate us in 2011-12. But after the crisis in Syria, they forgot us," he says.

The main hurdle for the UNHCR seems to be that they are unable to resettle Afghan refugees to third countries because those states want to help Syrian refugees more.

"Resettlement is not a right and out of the many millions of refugees globally, less than 10% of the entire world refugee population have the chance to go on to resettlement every year," the UNHCR stresses.

Turkey, meanwhile, temporarily shelters Afghan refugees rather than permanently accepting them because Ankara provides refugee status to citizens of member states of the Council of Europe.

Turkey enacted this geographical restriction when, in 1967, it ratified the 1951 Geneva Convention on the Status of Refugees.

Two years ago, Turkey's parliament enacted a law to regulate refugee status but the law did not provide it to Afghans in Turkey, despite expectations for such an accommodation.

Kılıç from Amnesty International says Afghans in Turkey remain in limbo as they have have no right to work here and have a difficult time accessing housing and healthcare.

Karaca, a refugee expert, acknowledges that the Turkish government could not alone solve the refugee problem. Without involvement from international actors, "there will be no durable solution," Karaca warns.

Osman Hacıbektaşoğlu, deputy chairman of the Directorate General of Migration Management, says Turkey has never closed its door to anyone.

Speaking during a Turkish conference on migration last month, Hacıbektaşoğlu said: "Be it Syrians or Iraqis, Turkey has opened its doors to these people. We cannot take any other position than that. We are proud of the Turkish people."

However, Barati says that if the U.S. turns down his application, he will try to cross into Europe like many other Afghans.

"I would rather die at sea while trying to cross into Europe instead of being killed by a bullet in Afghanistan," he says firmly.
Last Update: Jul 08, 2015 1:06 pm
RELATED TOPICS