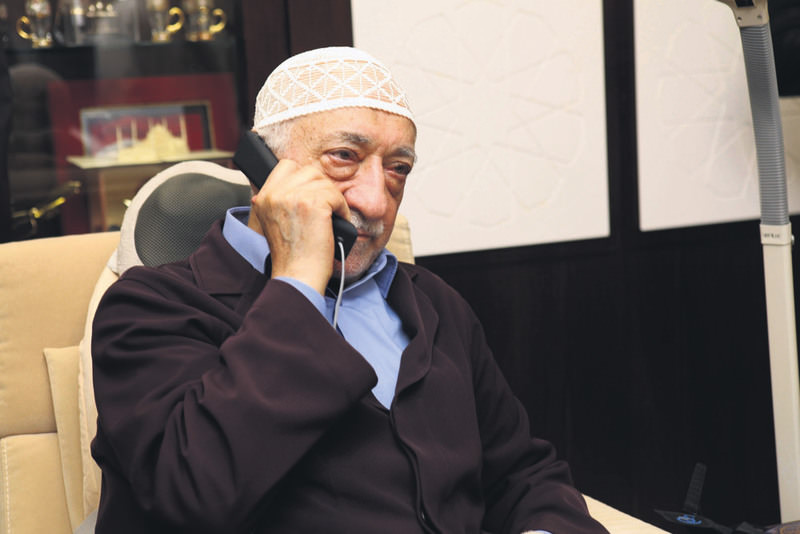 The Gülen Movement, which is accused of conducting illegal wiretapping activities, has blamed the U.S. for wiretapping phone calls Turkish officials made in regarding the operation to relocate an Ottoman tomb in Syria

Media outlets affiliated with the Gülen Movement, which is accused of illegally wiretapping thousands of people, including prominent political figures, has accused the U.S. of being behind the wiretapping.

Leader of the controversial movement, Fethullah Gülen, who has been living in self-imposed exile in Pennsylvania since 1999, is charged with running a terrorist organization accused of planning to topple the elected government through its followers in the judiciary, police department and other state apparatuses.

"The U.S. wiretapped you," İhsan Yılmaz, a lecturer for a Gülenist university and columnist for the movement's newspapers, said on his Twitter account, and called on the government to apologize for accusing the movement of spying.

The movement is accused of wiretapping encrypted phones used by top government officials as well as using a bugging device to record a confidential security meeting with the foreign minister and intelligence agents on March 21 concerning the protection of the historic Ottoman tomb. The illegally recorded meeting was leaked on YouTube by alleged members of the movement.

Arrest warrants have been issued for Gülen in three different cases in which he is listed as the prime suspect and organization leader. These include alleged exam cheating on the 2010 Public Personnel Selection Exam, illegal wiretapping activities and the Tahşiye case in which Gülen and his movement are accused of demonizing a rival religious group by portraying it as a terrorist organization through its members in the police and media.

Turkey is preparing a comprehensive fight against the Gülen Movement following National Security Council (MGK) meetings, the latest of which took place on June 29, which defined illegal structures as a threat against national security.

According to reports, the MGK prepared a recommendation letter to fight the Gülen Movement, which was submitted to the Prime Ministry shortly after the meeting. The letter was recently approved by the Cabinet and became a decree. The precautions, which are planned to be taken under the scope of the decree, will be passed on to all institutions as circulars, paving the way for the preparation of the Parallel Structure Action Plan. The decree will thereby implement a comprehensive blockage against the Gülen Movement.

The MGK meeting underscored that any structure that poses a threat to the unity and security of the state should be recognized as a threat to national security. "A target has been specified that covers all attempts directed toward obstructing the stability of elected governments or the will of the people," the MGK recommendation read, adding that the state will take the necessary precautions not only against the Gülen Movement, but also all other illegal structures that pose an imminent threat to security.

The MGK has advanced its fight against the Gülen Movement by forming a board that will specifically investigate the movement's domestic and international activities and monitor its flow of funds. The board is expected to keep the reports of its investigations regarding the Gülen Movement and submit them to President Recep Tayyip Erdoğan ahead of the meetings to keep him informed about the findings. The board will also be in charge of reporting how the fight against the movement evolves between the meetings of the council. The movement's infiltration of public institutions and utility of the precautions against the movement will also be followed by the board.

The Gülen Movement is a transnational movement led by Gülen. It has over 140 private schools around the world, including hundreds of charter schools in the U.S. It has been accused of infiltrating state institutions in Turkey and trying to overthrow the democratically elected government. Government officials have continuously expressed their determination to continue to lawfully fight the movement.
Last Update: Jul 09, 2015 10:06 pm
RELATED TOPICS