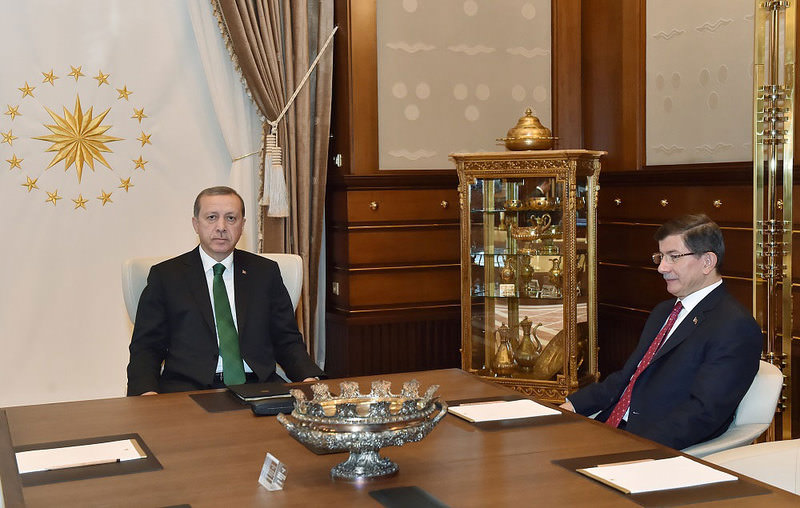 by Daily Sabah Jul 09, 2015 12:00 am
President Erdoğan assigns the duty to form the 63rd government to Ahmet Davutoğlu, wrote Presidential Spokesman İbrahim Kalın in a tweet on late Thursday.

First round of coalition talks will be concluded by Wednesday, Prime Ministry sources said, AK Party delegation will meet with all three opposition parties.

Speaking at AK Party's parliamentary group meeting, Davutoğlu had previously said that his party is ready for negotiations with other parties but will not make any concessions to pressure and impositions.

"Those who accuse the President of delaying the formation of gov't do not know the constitution" Davutoğlu said.

President Recep Tayyip Erdoğan has said Tuesday that he will give mandate to form a government to Prime Minister Ahmet Davutoğlu after the parties determined their parliament deputy speakers.

"Then the process of the forming a government will start," Erdoğan said at an iftar organized at the presidential palace in the capital Ankara.

Erdoğan said that he will ask the party that gained the most seats in last June's parliamentary elections to form a government.

The Justice and Development (AK) Party led by PM Davutoğlu came in first in the general election at 41 percent to claim 258 seats in the Grand National Assembly, 18 short of a simple majority.

"I wish that all political parties and their leaders act with a sense of responsibility to form the government as soon as possible," said Erdoğan.

If Davutoğlu is unable to form a coalition with any of the other three parties -- and none indicate they would be willing to join AK Party in government -- tradition dictates that the president should offer the second-place party the chance to create an administration.

If neither AK Party nor CHP can form a government within 45 days, the president must call for a fresh election and appoint a prime minister within five days to form an interim government consisting of representatives from all four parties according to their number of MPs.