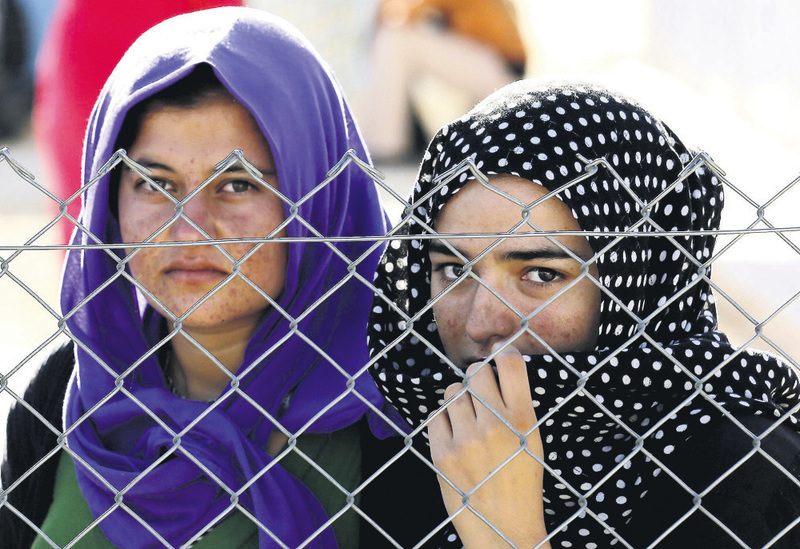 by Daily Sabah with Wires Jul 09, 2015 12:00 am
More than 4 million Syrians have fled the civil war ravaging their country to become refugees in the surrounding region – a million of them in the past 10 months alone, the United Nations said Thursday. Turkey is sheltering almost half this total. "New arrivals in Turkey and updated data from the Turkish authorities on refugees already in that country have taken the total number of Syrian refugees in neighboring countries to more than 4,013,000 people," the U.N. High Commission for Refugees (UNHCR) said in a statement. At least an additional 7.6 million people are displaced inside Syria. "Tragically, and with no end in sight to Syria's war, now in its fifth year, the crisis is intensifying and the number of refugees is rising. The 4-million milestone comes barely 10 months since the total of 3 million was reached," UNHCR said. The U.N. expects this figure will reach around 4.27 million by the end of the year."Refugee outflows in June 2015 saw more than 24,000 people arriving in Turkey from Tal Abyad and other parts of northern Syria. Turkey, already the world's biggest refugee hosting country, is now home to around 45 percent of all Syrian refugees in the region," the UNHCR said."The figure of 4 million comprises 1,805,255 Syrian refugees in Turkey, 249,726 in Iraq, 629,128 in Jordan, 132,375 in Egypt, 1,172,753 in Lebanon, and 24,055 elsewhere in North Africa. Not included, are more than 270,000 asylum applications by Syrians in Europe, and thousands of others resettled from the region elsewhere," UNHCR said.

"This is the biggest refugee population from a single conflict in a generation," U.N. refugee chief Antonio Guterres said in a statement. "It is a population that needs the support of the world but is instead living in dire conditions and sinking deeper into poverty," he warned

The current number of refugees is already by far the highest handled by the UNHCR for a single conflict in nearly a quarter century, since the agency was assisting some 4.6 million Afghan refugees in 1992.

More than 230,000 people have been killed in Syria since anti-government protests erupted in March 2011, precipitating a civil war pitting pro-regime forces, rebels and extremist groups against each other.

In addition to the millions who have fled Syria, 7.6 million have been displaced inside the war-torn country, "many of them in difficult circumstances and in locations that are difficult to reach," the UNHCR said. Syrians are so desperate to escape the nightmare conditions in their country that they made up a third of the 137,000 people who flooded across the Mediterranean to Europe during the first half of 2015 – many in rickety boats and at the mercy of human traffickers, UNHCR figures show. "Worsening conditions are driving growing numbers toward Europe and further afield," Guterres said, but stressed that "the overwhelming majority remain in the region." Thursday's announcement came amid reports that Turkey – already hosting some 1.8 million Syrian refugees – is preparing a giant new refugee camp to house 55,000 people amid concerns that an anticipated major escalation of the conflict in the Syrian province of Aleppo could spark a growing exodus.
Last Update: Jul 09, 2015 7:47 pm
RELATED TOPICS