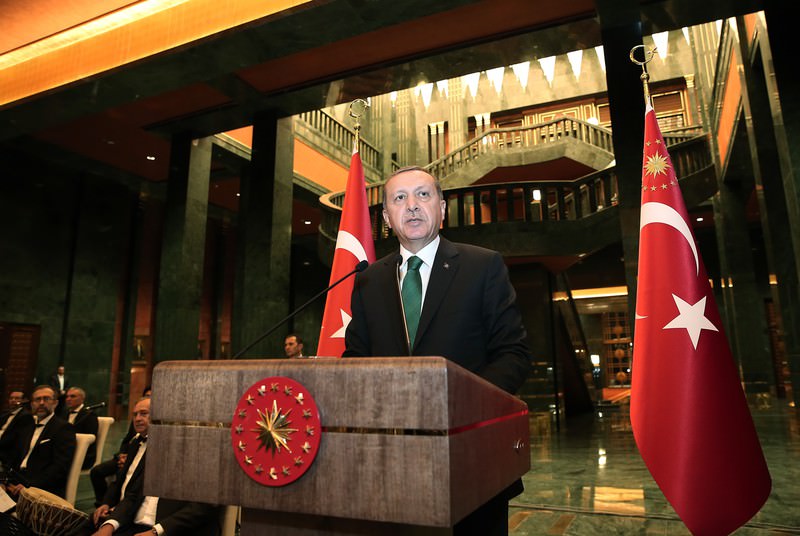 by Emre Başaran Jul 10, 2015 12:00 am
At an iftar dinner for foreign ambassadors at the Presidential Palace in Ankara on Thursday President Recep Tayyip Erdoğan said some news recently published in the Turkish media about Chinese government oppression of Uighurs is either exaggerated or fabricated.

He spoke of the recent outrage leading to incidents around Turkey caused by the reporting of China's repressive policies on Uighurs in the northwestern Xinjiang Uighur Autonomous Region, also known as East Turkestan, and said that it is exaggerated by false news stories and posts on social media. Erdoğan said: "I want to point out that many of those pictures are exaggerated and false. I also find it noteworthy that these provocations came just before my official trip to China on June 28. We have many cognates all over the world. Whatever problems they face concern us as well.

"The falsified news and pictures regarding Uighurs published by several Turkish media sources and on Twitter are provocative and fabricated, which led to several attacks against our East Asian friends who have come to Turkey as our guests. We strongly disapprove of these violent attacks. I call upon the whole nation to not be fooled by those provocations."

Later in his speech he detailed Turkey's stance on Syrian refugees in Turkey. "Defending a regime that remorselessly killed more than 300,000 people is not a humanitarian attitude. Turkey is currently home to nearly two million Syrian refugees. All of the Western countries have 250,000 Syrians in total. We have opened our gates to those oppressed regardless of their race, religion or sect. We have accepted more than 20,000 Syrians in the aftermath of the Tal Abyad clashes. In spite of these realities, there is an ongoing smear campaign against Turkey. Some said we have a divisive agenda and segregate people. Some said we supported ISIS," he said, referring to the Islamic State of Iraq and al-Sham terrorist organization.

He further added that while Turkey alone has spent more than $6 billion on humanitarian relief to support the people fleeing the ongoing wars in the region, Western countries have only donated $400 million in total. Erdoğan also emphasized that Turkey's refugee camps are one-of-a-kind in the world.

"Every country should contribute to the fight against terror be it intelligence sharing, detention or deportation. Turkey has so far detained or deported more than 1,300 foreigners on accusations of being members of terrorist organizations. We have also forbidden 14,000 criminals from entering the country. The countries that these terrorists come from should do their own duties," he added.

Speaking about the problems Middle Eastern countries face, he said: "The illegally jailed [Egyptian] president, Mohammed Morsi, must be freed. The coup government tries to silence opposition in Egypt. The situation in Egypt only serves the needs of terrorist organizations. Egyptians are our brothers. We have to stand against oppression as their brothers."

He also mentioned the recent developments in Yemen and Libya. "We are closely following the developments in Yemen. Only politics can solve the problems in Yemen. War has never been the right solution. We have sent and we will continue to send humanitarian relief and food to the people of the region. We have to struggle against those trying to create sectarian strife in the Islamic world. We have to fight with wisdom and ethics against the sectarian tensions some try to create. We also urge the parties in Libya to come to an understanding through a process of political dialogue to stop the killings and bloodshed in the region."

After the iftar dinner, the president presented scarves to the women and ties to the men.

Since the beginning of the Islamic holy month of Ramadan, Erdoğan has given many iftar dinners, including for the personnel of the Presidential Palace.