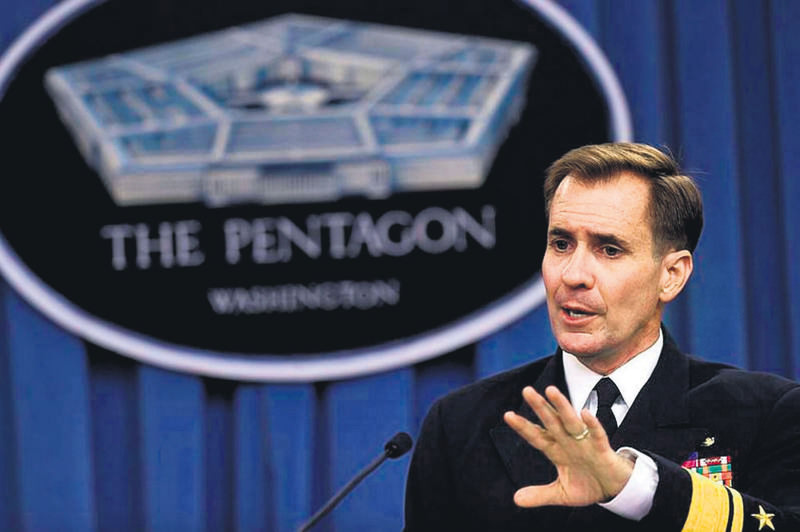 by Daily Sabah with AA Jul 10, 2015 12:00 am
United States officials have said they understand Turkey's concerns about Kurdish groups fighting in northern Syria but added that bilateral discussions between the U.S. and Turkey had focused on the Islamic State of Iraq and al-Sham (ISIS). U.S. State Department spokesperson John Kirby told reporters on Thursday that American officials had held "constructive" and "wide-ranging" talks with Turkish counterparts this week to discuss mutual efforts in the anti-ISIS international coalition.

Turkey's National Security Council (MGK) at the end of June expressed its concern about purported attempts to change the demography in Syria during fighting near the Turkish border. In recent weeks, Turkish media reports have claimed the PKK-affiliated Democratic Union Party (PYD) has been trying to change the demographic structure of northern Syria with the aim of establishing a Kurdish state from Iraq to the Mediterranean Sea.

Kirby said the U.S. understands "Turkish concerns with respect to fighters across the border," but added that the coalition's focus was "inside Syria against ISIL [ISIS]."

President Recep Tayyip Erdoğan, speaking in June, said Ankara would not tolerate the establishment of a new state in northern Syria.

Asked about a Germany-based magazine's claims that the NSA had spied on a top Turkish security meeting that discussed Turkey's possible intervention in Syria to protect a Turkish enclave, Kirby directed all related questions to the NSA. "We're not going to comment publicly on every specific alleged intelligence or disclosure activity," he said.

The magazine's claims include that the NSA tapped the Turkish intelligence chief's phone and collected audio from the meeting. Kirby was also asked about whether Turkey and the U.S. see eye-to-eye on local partnering on the Syria crisis. "Turkey is concerned with respect to fighters across the border," he said, whereas the U.S. focus inside Syria is against ISIS.

The U.S. is leading an international coalition against ISIS militants. Coalition warplanes have been striking ISIS targets in Iraq and Syria since September 2014, as well as supplying weapons to Kurdish and Iraqi security forces fighting the extremist militants. Kirby also noted that Turkey has a significant refugee problem. He said that Turkey was dealing with the issues "ably ... considering the heavy demands that these millions of refugees are placing upon [Turkey's] infrastructure."

Last week, U.S. Ambassador to Turkey John Bass said the U.S. had forwarded Turkey and the U.S.'s mutual concerns about preserving Syria's "territorial integrity" to the PYD after the group took control of some districts in Syria from ISIS. On the 239th U.S. Independence Day, the ambassador said, "We collaborate with our allies and coalition countries in the fight against ISIS, which is a threat for all of us."

Pointing to the fact that Turkey and the U.S. have common concerns about the rising threat of ISIS, the ambassador said coalition countries and U.S. allies are collaborating against the presence of the group in central Syria and other regions throughout the country. "I will not touch upon the hypothetical topics concerning the region, but what's sure is, Turkey and the U.S. have common worries regarding ISIS presence in northwestern Syria and the Turkish border," he added.

Referring to the importance of fighting against ISIS, he said that ISIS's presence on the Turkish border enables the group to compensate for their losses via smuggling, despite the Turkish government's vigorous efforts. "Firstly, Syria should maintain democracy and its territorial integrity. Syrian people need to live in security. And secondly, the internally-displaced people within Syria have to be allowed to return to their homes whenever they feel safe. That's the U.S. and Turkey's point of view. We have clearly declared those principles to the PYD and urged its members to respect those principles," he further added.
Last Update: Jul 10, 2015 8:23 pm
RELATED TOPICS