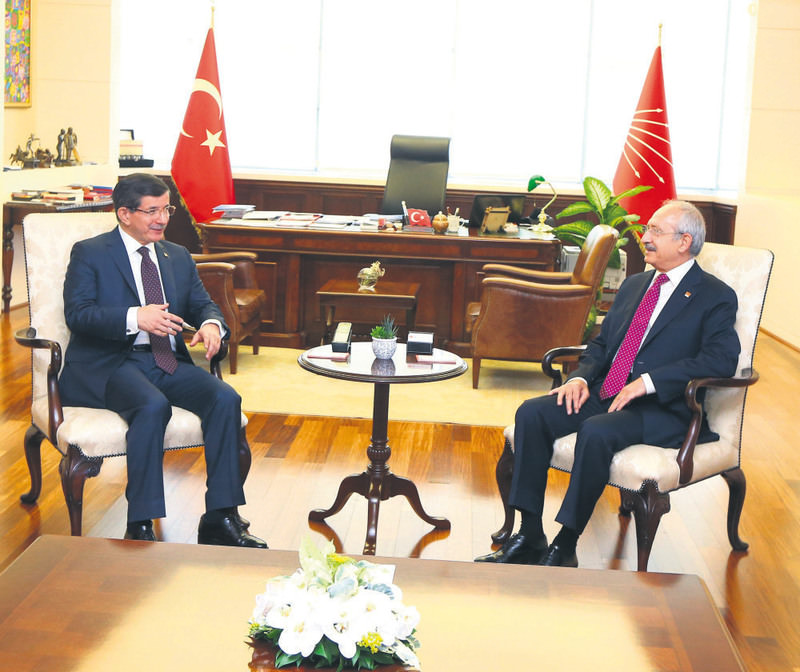 Preliminary meetings for a possible coalition government began on Monday with Prime Minister Davutoğlu visiting the CHP's Kılıçdaroğlu, with more intensive talks and bargaining expected in the coming several weeks

Justice and Development Party (AK Party) Chairman and interim Prime Minister Ahmet Davutoğlu met with the main opposition Republican People's Party (CHP) Chairman Kemal Kılıçdaroğlu on Monday to hold the first of several discussions on a potential coalition. The first of talks to form a coalition government after no party gained a clear majority in the general elections last June took place at the CHP headquarters in the capital Ankara on Monday afternoon.

Following the hour-and-40-minute meeting, the AK Party delegation departed for the AK Party headquarters, where Davutoğlu spoke to the media regarding the meeting. "The meeting was held in a sincere and friendly atmosphere. I would like to express my gratitude to Mr. Kılıçdaroğlu," he said, adding that no bargain or negotiations were made during the first round of talks. Saying that "mutual trust" and "formation of a strong government" were core points made during talks with the CHP, Davutoğlu said the same messages will also be given to Nationalist Movement Party (MHP) Chairman Devlet Bahçeli on Tuesday.

Davutoglu is next scheduled to meet Bahçeli on Tuesday and the pro-Kurdish Peoples' Democratic Party (HDP) co-chairs, Selahattin Demirtaş and Figen Yüksekdağ, on Wednesday as part of the first round of negotiations to form a coalition government.

"We have no prejudices or prerequisites. We are ready to discuss all the essential issues required for governance," Davutoğlu said at an iftar (fast-breaking meal) event organized by the AK Party in Istanbul on Sunday. He said he would discuss all options, suggestions and opinions with other party leaders in an "open-hearted manner."

"I hope that we can establish a new government at the earliest, and in a way that would satisfy everybody in the country. Our only purpose is to form this government through mutual understanding, and without wasting any time. The second round of meetings will be held in accordance with the atmosphere following Eid al-Fitr," Davutoglu said on July 9, referring to post-Ramadan holiday.

President Recep Tayyip Erdoğan gave Davutoğlu the mandate to form a new government on July 9. Davutoğlu now has 41 days left to form a government around the AK Party. If he is unable to form a coalition, tradition dictates the president should offer the party that received the second most votes the chance to create an administration within another 45-day period. Should this also fail to provide a governing coalition, the president must call early elections and appoint a prime minister within five days to form an interim government consisting of representatives from all four parties.

Early elections would likely be held around the end of November. The last coalition talks in Turkey were done 16 years ago when the Democratic Left Party (DSP) of late Prime Minister Bülent Ecevit failed to win a majority in the general elections of April 18, 1999.