Possibility of early elections increases, as MHP wants to stay out of coalition 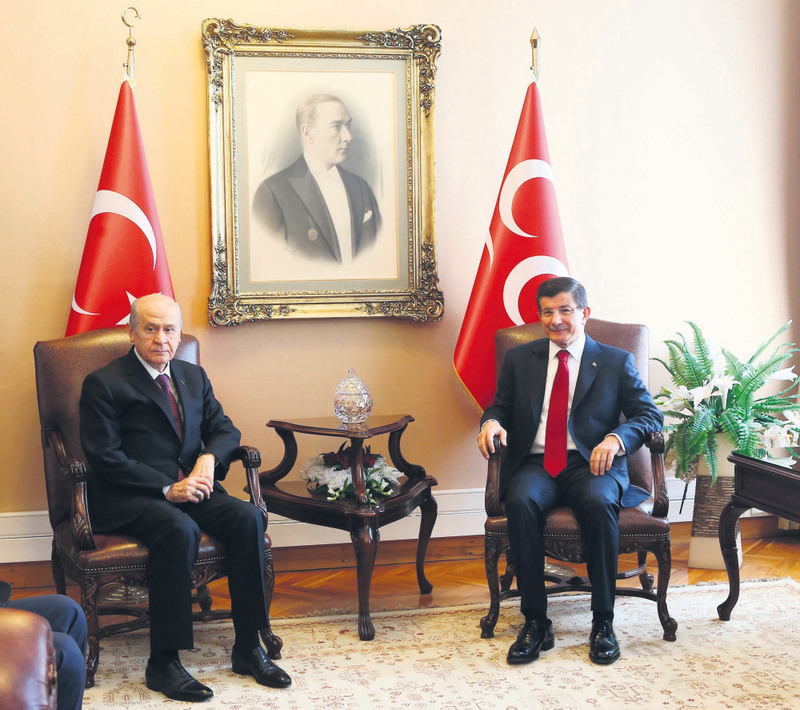 Prime Minister Davutoğlu met with the MHP in the second visit in a round of meetings as part of coalition negotiations. The MHP remains opposed to participating in any coalition talks and would rather push for early elections

After the June 7 elections an AK Party-MHP coalition was considered as the most probable option due to the closeness between the parties' voters sharing similar views, but Bahçeli's harsh statements raised doubts about the coalition. In his previous statements Bahçeli imposed the three stipulations of terminating the Kurdish reconciliation process, limiting President Recep Tayyip Erdoğan's powers to those set in the Constitution and restarting the investigation into the Dec. 17 and Dec. 25 corruption probe. Davutoğlu said on Sunday that his party has no preconditions for the coalition talks, however, he underlined that they cannot open up the office of the president to debate.

Following the meeting, Davutoğlu held a press briefing at AK Party headquarters and announced that Bahçeli refused to be part of a coalition. "MHP leader Bahçeli repeated his opinion of not being a part of a coalition government," he said. "Regardless of success in coalition talks with the CHP, we can still meet with the MHP in the second round and in general," he added.

Davutoğlu said that the AK Party is still at the same distance to all parties, and regardless of success in coalition talks with the CHP, the AK Party will still meet with the MHP in the second round and in general to discuss the problems of the country.

Answering the questions about whether issues related to Erdoğan were discussed in the meeting, Davutoğlu said that these issues were not brought to table by the MHP. Sources within the MHP said that in the closed-door meeting Bahçeli said that the AK Party should first try a coalition partnership with the CHP, and if that does not work out then call for early elections.

Davutoğlu will continue coalition talks on Wednesday with the pro-Kurdish Peoples' Democratic Party (HDP). Davutoğlu and his delegation will visit HDP co-chairs, Selahattin Demirtaş and Figen Yüksekdağ. After the elections Demirtaş was outspoken about not forming a coalition government with the AK Party, saying the HDP will discuss other options.
Last Update: Jul 14, 2015 7:27 pm
RELATED TOPICS