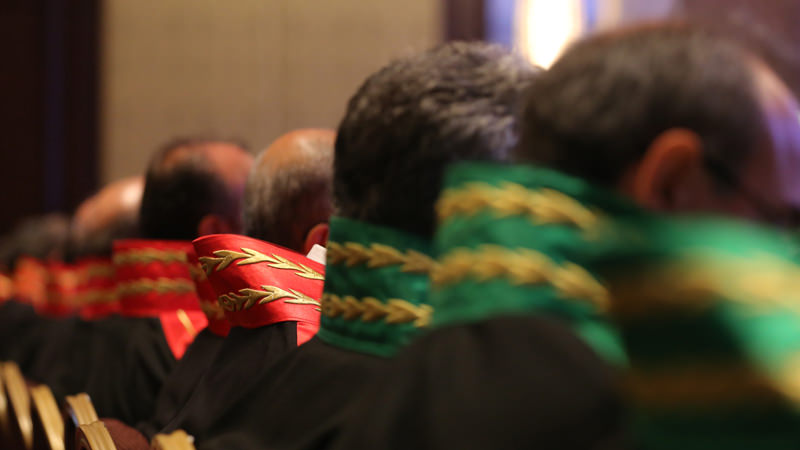 by Daily Sabah Jul 14, 2015 12:00 am
Turkey's top judicial body, the Supreme Board of Judges and Prosecutors (HSYK) on Tuesday suspended 49 judges and prosecutors for giving consent for illegal wiretapping of state officials, businessmen and journalists in the alleged Selam Tevhid terror organization case. It is believed that the Gülen Movement allegedly aimed to topple the government and authorized illegal wiretapping activities.

Prosecutors Celal Kara, Muammer Akkaş and Judge Süleyman Karaçöl are among those who have been suspended from duty. They had already been disbarred by the HSYK on the grounds of exploiting their duty in mid-May. The decision for dismissal was reportedly based on the 69th article of the HSYK law, which suggests the punishment of dismissal be given to those who act in a manner that blights the reputation and honor of the profession and that the offense does not necessarily have to constitute a crime. Indictments were prepared for four prosecutors and a judge as part of an investigation by the HSYK.

The decision has been made by the second chamber of the HSYK. The 49 individuals were allegedly involved in cooperation with police officers. They were arrested and sent to court on charges of attempting to stage a coup and political and military espionage related to an ongoing "parallel structure" probe.

The HSYK continues to make critical decisions on the alleged Gülen Movement-affiliated judges and prosecutors, following the Dec. 17 and Dec. 25 operations, which are believed to have been orchestrated by the Gülen Movement with the help of its members within the judiciary.

Already the HSYK reassigned 888 judges and prosecutors to new positions. Five judicial officials were also disbarred by the HSYK due to links with the Gülen Movement and due to accusations of wrongful conduct in the Dec. 17 and Dec. 25 operations.

The Gülen Movement is accused of carrying out illegal wiretapping activities to allegedly oust the elected government. Its members are believed to have infiltrated government institutions such as the police and judiciary to be able to conduct operations against what it considers a foe. The movement is led by Fethullah Gülen, who lives in the United States in exile. The alleged controversial and shady activities by Gülenists have had a slew of lawsuits filed against them.