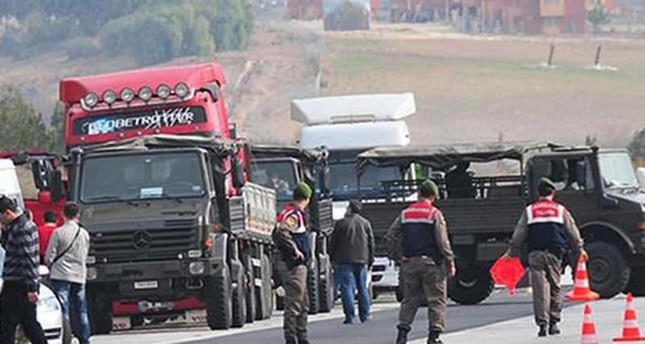 by Daily Sabah Jul 15, 2015 12:00 am
Five prosecutors who were involved in intercepting the trucks belonging to the National Intelligence Organization (MİT), allegedly exceeding their authority, will stand trial at the Supreme Court of Appeals, according to a new decision by the Supreme Board of Judges and Prosecutors (HSYK). The HSYK had previously suspended the prosecutors from duty earlier this year.

The suspects allegedly violated Turkey's national security laws in 2014 when they stopped and searched MİT trucks in Adana province that were en route to Syria. The trucks were allegedly loaded with arms and ammunition. They are accused of "attempting to overthrow the Turkish government by using force and violence or attempts to destroy the government's function totally or partly," and "getting intelligence on the politics and security of the state."

Earlier this year, the HSYK suspended the prosecutors from duty. The board then announced that it decided to suspend prosecutors Bağrıyanık, Karaca, Takcı, Şişman and Yaşar Kavalcıklıoğlu until the investigation is completed.

In January 2014, trucks belonging to MİT carrying aid to Turkmens were stopped and intercepted by security forces upon the order of former Prosecutor Şişman. The supplies in the trucks were seized and MİT staffers were handcuffed before they were detained, which prompted the government to reform its intelligence laws in an effort to avoid such situations in the future. The governor of the province was informed about the incident in its latest phase, and many believe the operation was aimed at creating a political crisis via joint efforts by the Gülen Movement and anti-government media outlets that made the incident public, despite its highly confidential status.

Sixteen of the 34 officers were reported to be tasked in the southern province of Adana where the MİT trucks were intercepted by security forces on the order of a prosecutor who allegedly acted on a tip that the trucks were full of ammunition to be delivered to a terrorist organization.

The operation that subsequently detained the MİT trucks is believed to be a plot hatched by the Gülen Movement in order to spark a crisis. As more details have been unveiled pertaining to the matter, the possibility that the operation was pre-planned and conducted by members of the Gülen Movement in the police and prosecutors in a purported attempt to defame the government, which it considers its foe, strengthened, prompting the prosecutor's office to investigate the incident.