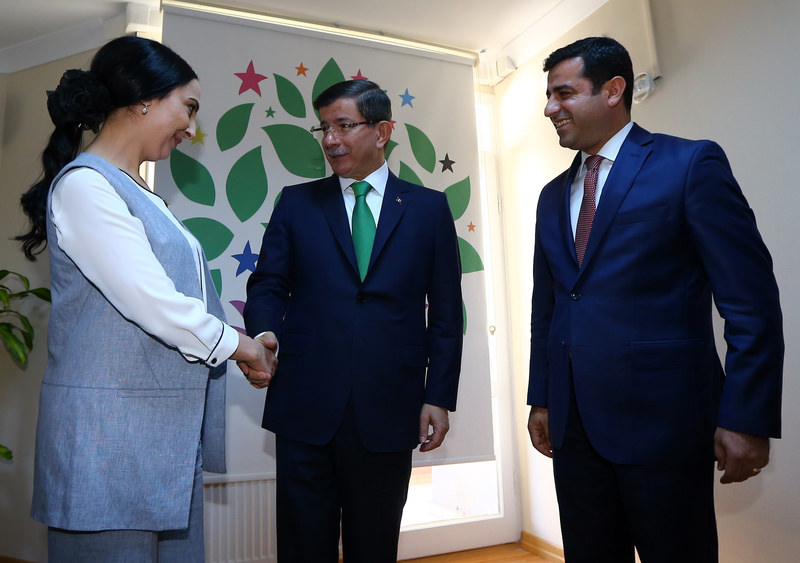 The meeting lasted an hour and 58 minutes, which is the longest compared to the previous meetings Davutoğlu held with the CHP and MHP.

Speaking about the meeting in a press conference at AK Party headquarters, Davutoğlu said that the AK Party team had a "successful consultation" with the HDP deputies and that the HDP entering Parliament should be used for Turkey's benefit. Describing the meeting held with the HDP officials, Davutoğlu said: "The focus was on the three principles declared by Demirtaş. We shared our points of view on peace, democracy and justice.
Speaking of peace, we told them that anyone who threatens the peace does not have a place in this country, and as the HDP they should stress this matter as well."

Asserting that HDP's attitude has changed over the month, Davutoğlu said regarding the coalition option with the HDP: "We can discuss any subject, but the conditions for a coalition partnership are not established. We will, however, continue to hold talks. The government that we are to form should be representative of all of Turkey. The HDP's views are as important as the CHP or the MHP's. Again, we don't have the same mechanism with the HDP that we have with the CHP."

Responding to questions, Davutoğlu evaluated Demirtaş's statement: "The PKK should disarm; however, the respondent of this issue is [imprisoned PKK leader Abdullah] Öcalan." Davutoğlu said: "We initiated the reconciliation process with pure intentions. There were many complaints ranging from economic underdevelopment of the [Kurdish] region to not receiving services. We started the democratization process. Due to these processes, the HDP is in Parliament as a strong group. What is the reason for carrying arms when all of the issues are resolved? We asked the HDP this question. We say that HDP voters should also ask this question and assert that they did not vote for an armed struggle."
Last Update: Dec 06, 2016 5:58 pm
RELATED TOPICS