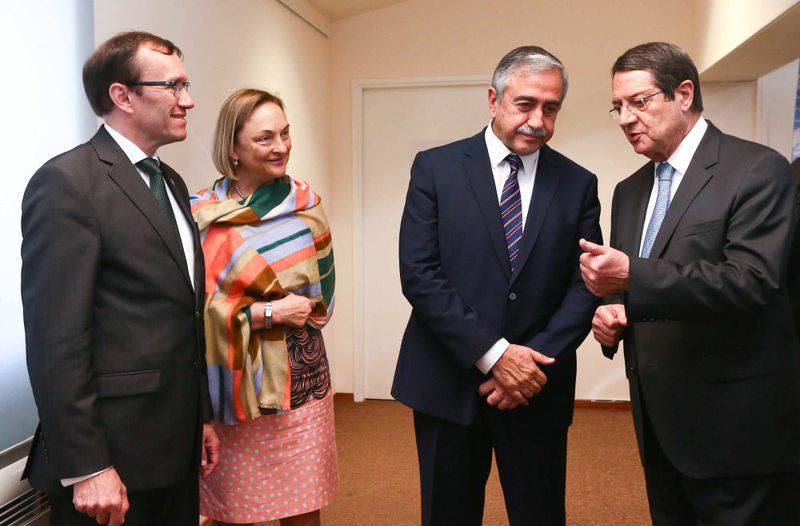 by Daily Sabah with AP Jul 16, 2015 12:00 am
The leaders of divided Cyprus must not let the chance to reunify the island slip away as renewed peace talks kick into gear, European Commission President Jean-Claude Juncker said on Thursday, warning that encouraging signs of progress in negotiations should not go to waste.

Juncker said a Cyprus peace accord would be "good news for the entire European Union" and that he would take a personal interest in negotiations. U.N. special envoy Espen Barth Eide has said dynamic energy and positive climate in the talks are starting "to pay real dividends."

On May 28, leaders agreed on a five-step plan to resolve the Cyprus issue following a meeting hosted by Eide. These steps included opening more crossing points, interconnecting power grids, allowing cellphone interoperability on both sides of the island, resolving the issue of radio frequency conflicts and forming a joint committee on gender equality.

Peace talks were unilaterally suspended by Greek Cyprus last October after Turkey sent an exploratory ship on behalf of Turkish Cyprus for seismic research off the coast of Greek Cyprus.

A major initiative collapsed in 2004 when a United Nations reunification blueprint was rejected by Greek Cypriots in a referendum. Anastasiades, who backed the 2004 initiative, said it was important that there were no winners or losers from the process.

Present negotiations would be assisted by an EU technocrat to ensure that any arrangements would be in conformity with EU rules and regulations, the Greek Cypriot leader said. Anastasiades declined to specify in what particular areas convergences had started emerging. At present, negotiators appointed by the two sides are looking at governance and property issues and at potential territorial adjustments in a future federated state. "Some progress has been observed on the chapters that are being discussed," he said. The sides would continue to pursue 'low level' confidence-building measures, but in a manner which would not detract from the key issue of finding a deal.

The island was divided into a Turkish Cypriot government in the northern one third and a Greek Cypriot government in the southern two-thirds of the island after a 1974 military coup by Greece was followed by an intervention by Turkey as a guarantor state. Border gates between Turkish Cyprus and Greek Cyprus were opened on April 2003. Mediators have sought unsuccessfully for years to end a deadlock and reunite the island as a two-zone federated state.

Turkish leaders have consistently affirmed that they are determined to bring a permanent resolution to the conflict on the divided island and have urged the international community to contribute to peace.
Last Update: Jul 16, 2015 10:32 pm
RELATED TOPICS