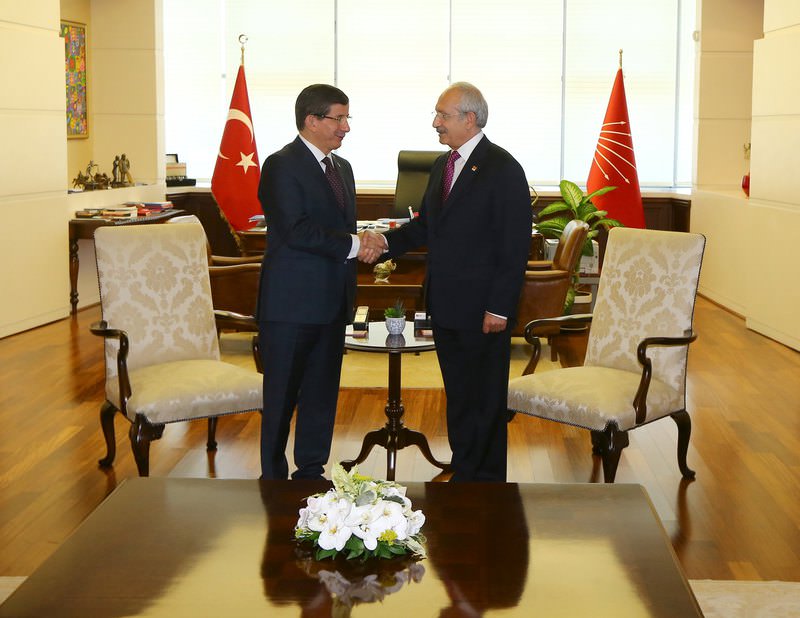 by Merve Aydoğan Jul 20, 2015 12:00 am
Following the first round of coalition negotiations, Culture and Tourism Minister Ömer Çelik is to meet with Republican Peoples Party's (CHP) Deputy Chairman Haluk Koç today on behalf of the Justice and Development Party (AK Party). Prime Minister Ahmet Davutoğlu is to meet with CHP Chairman Kemal Kılıçdaroğlu for the second round of talks if the early negotiations between Çelik and Koç result in a preliminary agreement that provides some hope for progress. Sources have indicated that the AK Party has prepared a file consisting of 21-articles that include the perspectives and expectations for the negotiations that will form the basis of further talks.

It was reported that in the 18-page file the priority of the negotiations is combating the "parallel structure" – referring to the Gülen Movement – and foreign policy, which has been the most debated topics between the two parties.

As Davutoğlu is to meet with the AK Party Central Decision and Executive Board (MKYK) today as well as the Cabinet in efforts to discuss the report that was prepared by AK Party staff officers, Çelik is to discuss the 21 articles with Koç. Çelik and Koç are to meet once more on Thursday following the Tuesday meeting. Though the first meeting between Koç and Çelik has been reported that it will be solely based on both parties' principles, the Thursday meeting is expected to be more intense as the government's devoted efforts in combating Gülenists top its agenda. Turkey has continuously been preparing for a comprehensive fight against the Gülen Movement following the last National Security Council (MGK) meeting on June 29 that defined it as an illegal structure and a threat against national security. The Gülen Movement, labeled the "parallel structure" by the government, was added to the National Security document, known as the "Red Book," and identified as a national threat due to its members allegedly infiltrating key government institutions in a purported bid to take control of the state. The AK Party expected that all coalition partners are to be in-line with its stance regarding the ongoing efforts to combat Gülenists.

In addition to fighting Gülenists, the meeting between Çelik and Koç is expected to include foreign policy as well as economy. While the AK Party indicated in its election manifesto that its foreign policy is one of its most significant successes, the CHP and others have strongly criticized it. With disagreement between the two parties regarding foreign policy, it has been expected that Thursday's meeting is to be intense on both sides. The CHP had previously indicated that in the case of a coalition government that includes the party, it requested to control the National Education Ministry and Foreign Ministry. It is reported that Davutoğlu, who is the architect behind Turkey's current foreign policy will not let go of the Foreign Ministry. In the case of the CHP attaining the Foreign Ministry, some critics have said Kılıçdaroğlu's lack of knowledge of foreign languages could lead to poor ability to perform an effective running of the ministry if he were to be foreign minister.

In addition to foreign policy, Çelik and Koç will also discuss the economy. The CHP had recently prepared a legislative proposal for those who are waiting to retire due to age restrictions but had fulfilled their insurance and premium dates. The proposed CHP legislation would allow those who want to retire without waiting to reach the required age once it is passed by Parliament. Kılıçdaroğlu's election manifesto had included mainly economic pledges like eliminating income tax on the minimum wage, decreasing diesel prices for farmers and providing free electricity for 230 kilowatts per hour. The CHP's economic promises have been criticized as being unrealistic by the government, but sources have indicated the two parties will further discuss economic pledges during the early negotiations prior to the second round of talks between leaders.
Last Update: Jul 21, 2015 1:22 am
RELATED TOPICS