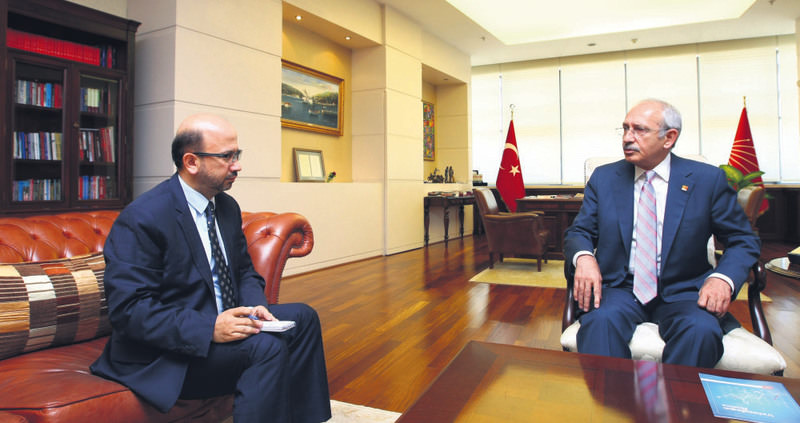 CHP chairman Kılıçdaroğlu, who is closest to teaming up with the AK Party, revealed enthusiasm for forming a coalition, but also considers the odds of new election high

Republican People's Party (CHP) Chairman Kemal Kılıçdaroğlu spoke to Sabah newspaper and answered questions regarding the progress of the ongoing coalition talks with the Justice and Development Party (AK Party), negotiation topics, the possibility of an early election, his perspective on the president.

Is the CHP ready for a coalition?

The CHP is the most ready party for the coalition. We have conducted all the preliminary work on what kind of a coalition can be formed between whom and under which circumstances.

Has the 60 percent bloc remained?

Due to the attitude of Mr. Bahçeli [the chairman of the Nationalist Movement Party, or MHP], the 60 percent bloc does not have a chance to found the government anymore.

Are you still pessimistic with regards to forming a coalition with the AK Party?

It is too early to be hopeful or hopeless. We are considering it with political realism.

What kind of a picture was revealed after the first round of coalition talks?

Both the MHP and the Peoples' Democratic Party (HDP) favor an AK Party-CHP coalition, which is interesting. First of all, we think Turkey has some serious problems, and these two parties do not regard themselves ready for resolving these problems. Secondly, they have some administrational weaknesses. They were approaching it with the thought that it would be more profitable to consider the following elections instead of taking responsibility. For us, what really matters is not the following elections, but Turkey.

What are the pros and cons of an AK Party-CHP coalition?

To what extent is the AK Party ready for a coalition? It has ruled the country for 13 years without any coalition partner, and now it is supposed to form a government with a political party it has battled for many years. We have criticized them for 13 years. Now, these two parties might act together and have a common word regarding the country's ruling power. The hardships of this picture are evident.

The positive aspects: The 13-year-old polarization might be avoided with a smart partnership. Fundamental problems such as the Kurdish question and the constitution issue might be resolved. As for the negativities, we have different worldviews. Time will show to what extent our perspectives will conflict.

What are the priorities of your negotiation strategy?

I do not expect a significant problem on political subjects. We are a country that has been conducting full membership negotiations with the EU and that recognized the European Convention on Human Rights. Some disagreements might arise on some titles such as reasonable doubt and Criminal Courts of Peace regarding regulations that were set after the Sept. 12 military coup.

Will you predicate on the feasibility of your economic promises?

The preliminary studies of our promises have been completed. We believe that we can persuade the AK Party on the matter of affordability. There will also be a bargaining margin at that point.

Do you have any demands regarding the Foreign, National Education, Justice ministries or any other investing ministry?

We wish the assignment of the relevant ministries to the CHP to ensure the realization of our promises.

What kind of a government should be formed?

A high-profile, four-year government. The resolution of serious issues requires a certain period of time and a certain determination. I also conveyed this point to Mr. Davutoğlu. The parties that will build a coalition must be sincere and trust each other.

What is the possibility of an early election in your opinion?

What do you think about the role and position of the democratically elected president in the system, who was elected by popular vote?

The election of the president in Parliament, as it used to be, can be proposed if wished. But we do not have a precondition. This subject could be resolved via reconciliation.

How will you approach the Cabinet being chaired by the president?

The constitution allows such an authority. But this authority has always been used in the context of extraordinary situations so far. It must remain that way.

Will you handle drafting a new constitution again?

The reconciliation on 60 articles during the previous parliamentary term is a considerable step. The same endeavor can be maintained also in this term. It could be agreed on 60 or 70 to 75 articles.

How do you evaluate the terrorist attack that took place in Suruç?I

believe the intelligence neglect had a role in the Suruç incident. If there is neglect, an effective investigation is required. The real perpetrators must be identified. We stated that the government's Syria policy should change. But we have been blamed at every turn. Today, the potential of the Islamic State of Iraq and al-Sham (ISIS) to organize demonstrations in Turkey should make us consider the case. We must adopt a common stance against weapons targeting the innocent no matter the identity, location and source of the terrorist act.

Will you contribute to the common declaration call of the prime minister?

What is your perspective on the fight against the parallel structure (the Gülen Movement's infiltration into state institutions)?

We would not favor an illegal parallel structure within the state. The state has only one structure, of which the framework is set by the constitution.
Last Update: Jul 22, 2015 11:19 pm
RELATED TOPICS