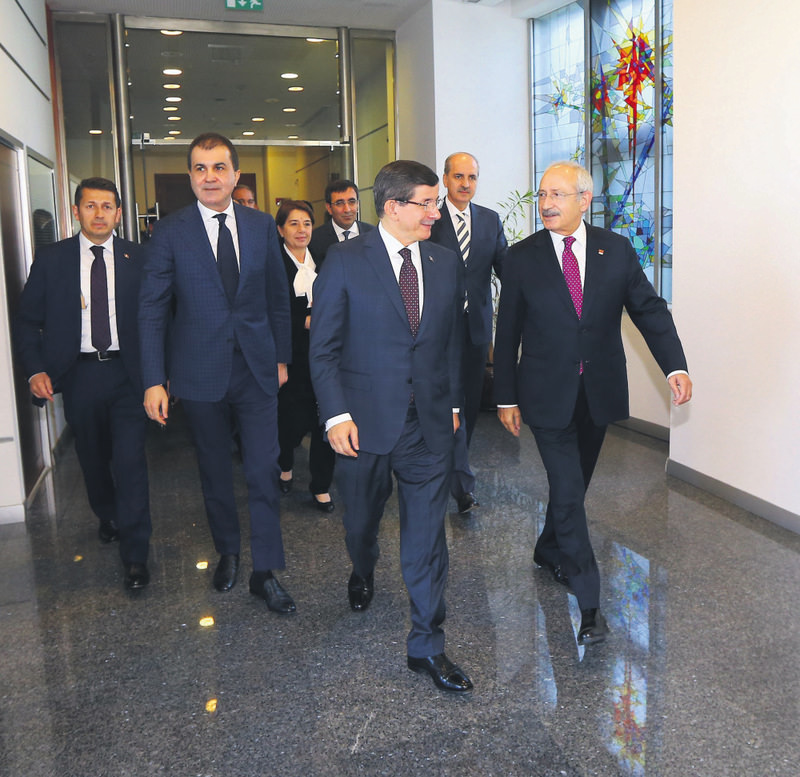 by Fatih Şemsettin Işık Jul 23, 2015 12:00 am
Following a meeting held between Culture and Tourism Minister Ömer Çelik from the Justice and Development Party (AK Party) and Haluk Koç from the Republican People's Party (CHP), an official statement from the CHP on Tuesday indicated that the party adjusted its committee and agenda for the ongoing talks. Still, remarks made by several leading members of the opposition parties indicate that all are preparing for a possible early election as soon as this autumn, expecting the coalition negotiations with the AK Party and CHP to fail. Elections on June 7 had resulted in a hung parliament, giving no party the majority to form a government by itself.

"The committee that is authorized for [Prime Minister] Ahmet Davutoğlu's visit to the CHP will conduct the negotiation talks. Any progress in the talks and the discussion of technical sub-topics might lead to some changes in this committee. With regard to the importance and time emergency of the issue, it seemed necessary to share this information with the public upon the statement of government spokesman [and Deputy Prime Minister] Bülent Arınç," said the statement.

Meanwhile, former chairman and current CHP Antalya deputy, Deniz Baykal, indicated that coalition talks are useless and said, "There is an early election in November."

Speaking to the press during his visit to the CHP's county organizations, Baykal remarked on the latest developments along with the coalition talks conducted between the AK Party and the CHP. Claiming that early elections will take place in November, he said: "The Nationalist Movement Party [MHP] has already taken its position. Namely, coalition talks are nothing but acting. There is an early election in November. In this election, the most important thing is the opposition's being stabbed within itself."

Regarding the recent deadly attack in Suruç, Baykal said: "We are deeply saddened by the bitter events that have resulted from clashes between Muslims in other countries. We have always been expressing our regrets at every opportunity and have been thankful for not having such events in our country. They demonstrated in a very suffering manner that the saddening events we witnessed abroad might also include us at any moment and similar happenings may occur in Turkey as well. This is very upsetting."

Touching on the electoral process for Parliament speaker, Baykal said the MHP pledged at the very beginning to prevent the AK Party's candidate from being elected, and added: "But they broke their promise. Even their group deputy chairman declared through Levent Gök that they will support me. However Bahçeli did not do the usual thing. If they would have respected themselves, they would have cast their votes for the candidate that was in the race opposing AK Party."

Baykal also said he knows very well why the MHP followed such an attitude and claimed that the MHP wants to be the main opposition by deactivating the CHP. "He already revealed his view on the matter. There is no other explanation for this. If the MHP did not want me [to be elected], they would have come before me and said this, then I would tolerate it. Namely, a historic opportunity was missed in the election of Parliament speaker."

CHP Chairman Kemal Kılıçdaroğlu is also readying for possible early elections. Responding to the question of whether he sees early elections are likely or not in an interview with Yeni Şafak daily on Thursday, he said they are, adding: "There are some sincere steps that were taken for a coalition, but when we realistically regard the issue, there are some difficulties."

Again, during his round of consultations with the MHP's provincial branch in Kırıkkale on Wednesday, MHP Chairman Devlet Bahçeli also gave the signal for the start of a general election campaign. In his speech Bahçeli said: "We are not afraid of early elections. We gave the start signal [for the election campaign] in Kırıkkale."
Last Update: Jul 23, 2015 9:55 pm
RELATED TOPICS