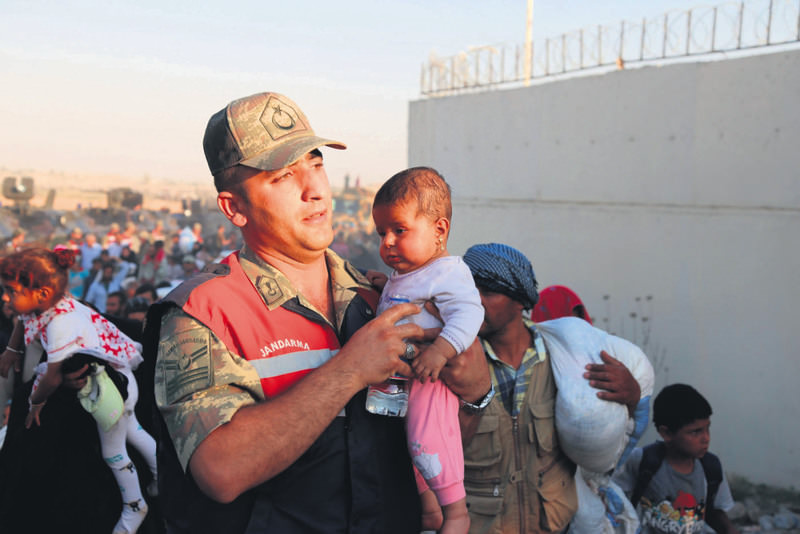 by Daily Sabah Jul 23, 2015 12:00 am
As the number of refugees seeking shelter in Turkey swells with escalating security issues in neighboring Syria, Turkey, which currently hosts more than 2 million refugees, cannot afford to absorb more, said Fuat Oktay, the director general of the Prime Ministry's Disaster and Emergency Management Agency (AFAD). Oktay also highlighted the necessity of a safe zone in Syria to overcome the protracted, costly refugee situation in the country.

Turkey's opening of its doors to hundreds of thousands Syrians since the outbreak of the civil war has come at a substantial cost to the government as it spent nearly $6 billion to carve out a life for the refugees it hosts. The intense clashes on its doorstep between Islamic State of Iraq and al-Sham (ISIS) militants and Syrian Kurds have pushed hundreds more over the last few months to seek refuge in Turkey. Oktay said "Turkey cannot cope with more" but also underlined that; nevertheless, AFAD was taking all the necessary precautions in case of a fresh flow of refugees.

The repercussions of hosting a whopping 2 million refugees has pushed the government to seek international assistance to share its burden, but thus far, Turkey has received neither satisfactory funds from the west to meet the expenses of sheltering the refugees nor was it supported by the U.S.-led coalition to establish a safe zone near its border.

"You can't expect a country to handle alone the immigration of millions. Turkey is trying to do its part for its own security. Turkey has been asking for a safe zone since the onset [of the civil war]. Unfortunately the U.N.'s Security Council has not taken the decision in time. Turkey paid the price of that," Oktay said, adding that AFAD once the decision of forming a safe zone – about which discussions are currently under way – is made, the organization will begin its preparations.

Turkey has openly expressed it was in favor of installing a safe zone along its border since the U.S.-led coalition was established to fight the threat of ISIS. The issue has once again came under the spotlight as the clashes between ISIS militants and the Democratic Union Party's (PYD) armed wing the People's Protection Units (YPG) mounted recently, putting Turkey on red alert against the possibility of both a spillover of violence and new waves of refugees.

"The PYD is trying to change the demography in Tal Abyad. Last week, 300 more Turkmens and Arabs took refuge in Turkey. Thousands cannot return, the world is silent" Oktay said.

Thousands of Syrian refugees streamed into Turkey's Şanlıurfa province through the Akçakale crossing on the Syrian-Turkish border last month, fleeing the clashes between Kurds and ISIS in Tal Abyad. Turkey claims, the PYD, by forcing out Arabs and Turkmens from the Syrian towns not least, Tal Abyad, is trying to establish a Kurdish belt that runs along the Turkish border to ramp up its power in the region.

Oktay also responded to the claims that Turkey is "educating ISIS members" in the camps allocated for the refugees, saying "there is not even one single activity that goes on in secrecy." Oktay, dismissing the allegations as a defamation campaign against the government, has said those who work at the camps go through a security interrogation before they begin their duty and that those who stay at the camps all have biometric identity cards. Oktay underscored there is no possibility of any ISIS members infiltrating into the camps.

"We not only provide shelter to the refugees, but also education and psychological assistance and various courses. We make efforts for the future of the people. These children will build the future of Syria. We provide them with every kind of aid," Oktay further added.
Last Update: Jul 23, 2015 10:35 pm
RELATED TOPICS