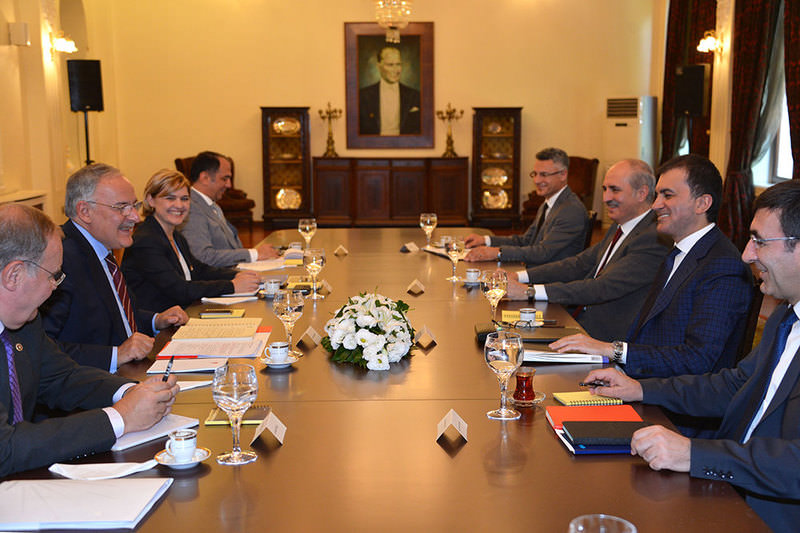 While parties voice the possiblity of going to the polls for snap elections, AK Party and CHP delegations met on Friday before the two sides start bargaining for a coalition government. A recent survey revealed that 72 pct of the public favors early elections

As the latest public survey conducted by the Ankara-based Objective Research Center (ORC) has indicated a majority of participants are in favor of early elections, the Justice and Development Party (AK Party) and the Republican People's Party (CHP) delegations met in Ankara Palace on Friday afternoon, where it has been reported the two party's officials have discussed details of the mutual agreement on the methods of coalition talks.

According to the sources, the CHP delegation, which continuously reminds everyone of its 14 conditions for coalition, is expected further to demand its fifth condition to be agreed on, which is minimizing the role of the president in accordance with the Constitution and practices. While some expect a mutual agreement on critical items such as foreign policy, the reconciliation process, the lowering of the electoral threshold and a new constitution to be reached, statements made by several leading members of the opposition parties indicate that all are preparing for a possible early election as soon as this autumn, and expecting the coalition negotiations with the AK Party and CHP to fail.

Meanwhile, former chairman and current CHP Antalya deputy, Deniz Baykal, indicated that coalition talks are useless and said, "There is an early election in November." Speaking to the press during his visit to the CHP's county organizations, Baykal remarked on the latest developments along with the coalition talks conducted between the AK Party and the CHP. Claiming that early elections will take place in November, he said: "The Nationalist Movement Party [MHP] has already taken up its position. Namely, coalition talks are nothing but acting. There is an early election in November. In this election, the most important thing is the opposition's being stabbed by itself."

In this regard, the latest survey also indicated 90.2 percent of AK Party supporters and 57.9 percent of CHP supporters want early elections. As support by the public for a coalition government is extremely low, the political parties are placing all possible options on the table. Minister Çelik also stated following Tuesday's meeting that coalition talks are not guaranteed to result in a coalition and added that the possibility of holding early elections and forming a coalition government are both equal.

In addition to Çelik's remarks, CHP Chairman Kemal Kılıçdaroğlu is also readying for possible early elections. Responding to the question of whether he thinks early elections are likely or not in an interview with Yeni Şafak daily on Thursday, he said that they are, adding: "There are some sincere steps that were taken towards a coalition, but when we realistically regard the issue, there are some difficulties."

Despite strong signals of a snap election, it has been reported that the CHP and the AK party have a mutual perspective on restructuring the constitution of Turkey. In regards to lowering the electoral threshold, sources indicate that it is highly possible for the two parties to reach an agreement where the threshold may drop to 7 percent.