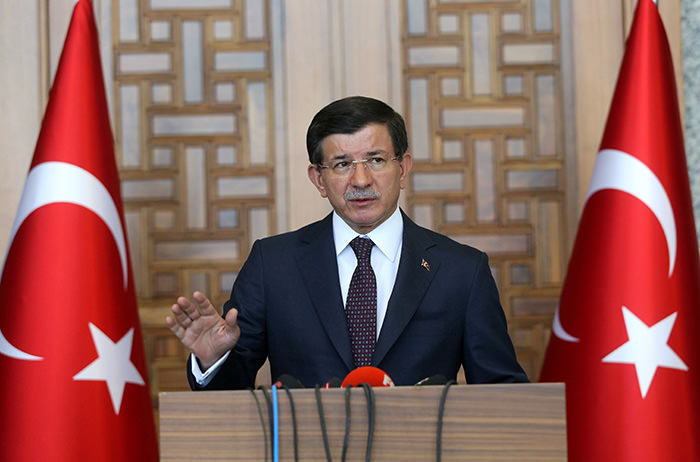 Turkish Prime Minister Ahmet Davutoglu speaks to the media in Ankara, Turkey, Friday, July 24, 2015 (AP Photo)
by Daily Sabah with AA Jul 24, 2015 12:00 am
Turkey's Prime Minister Ahmet Davutoğlu has pledged to take all necessary measures against any threat targeting the country's borders, including dangers posed by terrorist groups like the self-proclaimed Islamic State in Iraq and al-Sham (ISIS).

"All precautions will surely be taken without further order if any terrorist organization or others approach the borders of the Republic of Turkey in a threatening way," he told reporters after a visit to Turkey's Council of State on Friday in the capital, Ankara.

His remarks followed after early-morning airstrikes by Turkish F-16 fighter jets on ISIS targets in Syria.

The operation comes a day after a firefight with ISIS militants across the Syrian border, in which one Turkish soldier was killed and two others were wounded.

He noted that the operation was the result of a decision Turkey took for its own national security.

The airstrikes had "removed potential threats" to Turkey and targets were hit with "100 percent accuracy." He did not rule out further strikes, saying Turkey was determined to stave off all terror threats against it.

"This was not a point operation, this is a process," Davutoglu said. "It is not limited to one day or to one region... The slightest movement threatening Turkey will be retaliated against in the strongest way possible."

"The operation against ISIS achieved its goal and will never stop as we observe movement on and near the Syrian border at every moment," he said.

Meanwhile he added, "There are parallels between the PKK and ISIS attacks in Turkey."

Davutoğlu added that 297 suspects including 37 foreigners have been detained in 16 provinces during nationwide anti-terror raids.