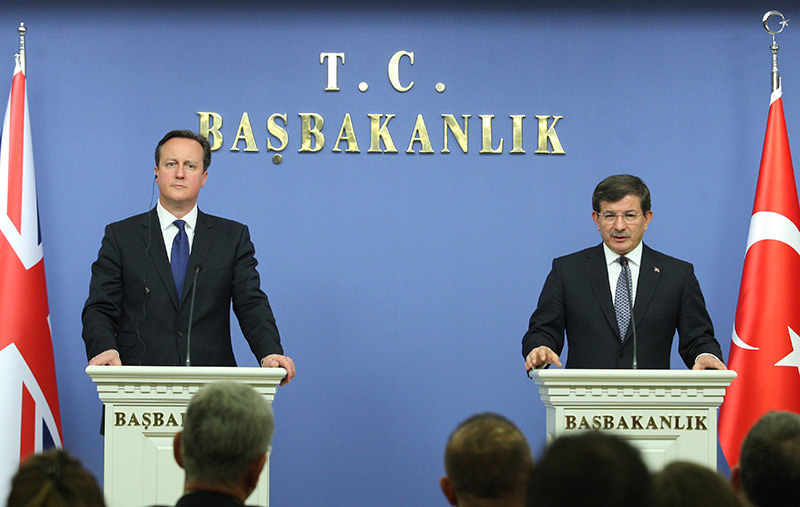 Turkey has stepped up efforts against the self-proclaimed Islamic State (ISIS) since Monday allegedly carried out by the group killed 32 people in southeastern Şanlıurfa province.

Two policemen were killed in retaliation on Wednesday. PKK claimed responsibility for that attack.

According to sources from the Turkish Prime Ministry, Davutoğlu informed Cameron about Turkey's multi-faceted strategy against the terrorist groups ISIS, the PKK and the DHKP-C (far-left Revolutionary People's Liberation Party-Front).

Davutoğlu also touched on the significance of Turkey receiving support against Syria-originated threats.

Turkey will continue its cooperation with its allies to establish stability and security in the region, he added.

The two leaders voiced pleasure about the maturing of the process of ensuring the U.K.'s participation in training and equipping Syrian opposition fighters.

Cameron, on his part, expressed the U.K.'s support for Turkey in fighting terrorism and offered his condolences over the attacks since Monday's deadly blast.

Police have apprehended a total of 371 people suspected of having ties with terrorist groups in 22 Turkish provinces on Friday and early Saturday.

In two days of raids early on Friday and Saturday morning, police held a total of 590 people, including at least 37 foreigners, suspected of having ties with terrorist groups across the country, said Prime Minister Ahmet Davutoğlu.

An official total number of detentions has yet to be issued, and seven of the suspects detained Saturday were later freed.

Since the early hours of Friday, a total of 297 suspects, including at least 37 foreigners, had been detained across Turkey in a nationwide anti-terrorism operation. Many of those detained are thought to be linked to groups like ISIS, the PKK and its youth wing, and the leftist DHKP-C.

And late Friday, Police have been targeted in two southeastern Turkish provinces, leaving at least 10 policemen injured in explosives attacks and one officer kidnapped, officials said.

On Friday evening, the Turkish Foreign Ministry said the U.S.-led anti-ISIS coalition can deploy its manned and unmanned aerial vehicles at bases inside Turkey.