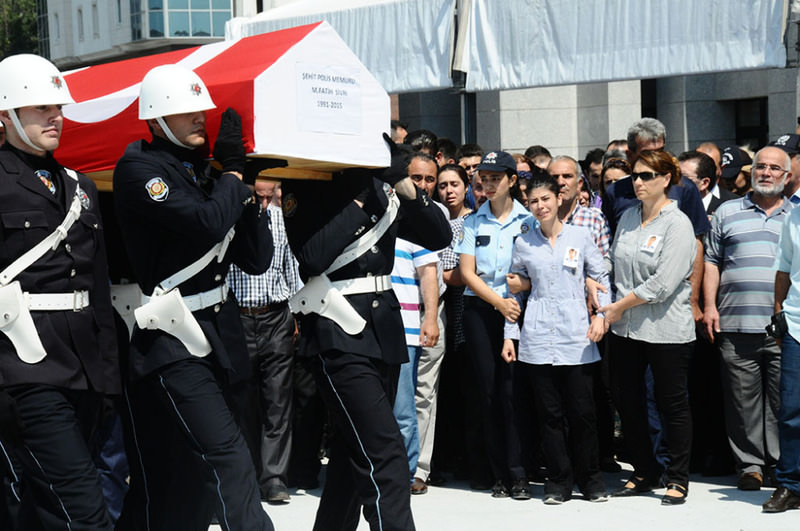 by Daily Sabah Jul 27, 2015 12:00 am
A police officer was shot dead on Sunday while trying to detain demonstrators in Istanbul's Gazi neighborhood.

Many police officers attended the official funeral ceremony, along with Istanbul Governor Vasip Sahin. Slain policeman Sivri's body was reported to be laid to rest in Kırıkkale, a central province of Turkey.

Muhammet Fatih Sivri, a member of the riot police unit, sustained gunshot wounds to the chest after attempting to enter a building in the neighborhood.

He was taken to Gaziosmanpaşa Taksim Training and Research Hospital, where he died. The perpetrators of the attack are being looked for, security sources said.

The attack came after police in Istanbul dispersed a group "belonging to an illegal organization," after they blocked a main street and attacked police officers with sticks, stones and Molotov cocktails, police said Sunday.

The group, who were wearing uniforms and masks, was dispersed because it was taking advantage of the funeral ceremony of a woman - reportedly a member of the outlawed far-left Revolutionary People's Liberation Party-Front (DHKP-C) - who was killed in Bağcılar on Friday, Istanbul Police Department said in a written statement on Sunday.

The body of the woman, who lived in the district of Tuzla on the city's Asian side, was forcibly taken to a cemevi - an Alevi place of worship - in the Gazi neighborhood of the Sultangazi district on the European side.

Police said it was propaganda for the leftist terror organization. The police department in the Gazi neighborhood had taken safety precautions to allow the safe transfer of the body to the graveyard, police said, adding the precautions were not against the rituals of the funeral.

Istanbul Governor's Office also stressed in a statement on Sunday that the funeral ceremony would go ahead as normal, but security forces would not allow it to be used as terrorist propaganda.
The woman was killed during a shootout with police in a wave of anti-terror operations across the country, which saw over 800 detentions on suspicion of having links to terrorist groups, including the Islamic State of Iraq and al-Sham (ISIS) and the terrorist PKK.
Last Update: Jul 27, 2015 8:45 pm
RELATED TOPICS