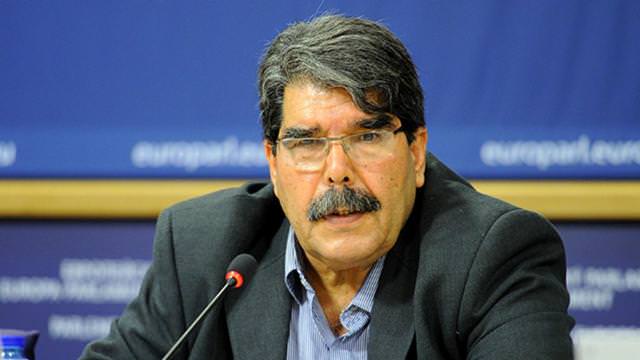 Democratic Union Party (PYD) Co-Chair Salih Muslim
by Merve Aydoğan Jul 27, 2015 12:00 am
Idris Nassan, the deputy responsible for the foreign affairs of the Kobani administration in northern Syria, has reportedly thanked Turkey for its recent success in carrying out airstrikes on the terrorist organization, the Islamic State of Iraq and al-Sham (ISIS). Democratic Union Party (PYD) Co-Chair Salih Muslim said in an interview with Al-Hayat magazine that they will allow the return of Syrian regime forces to Rojava and that the PYD's People's Protection Units (YPG) will join forces in that case. In this regard, Can Acun, a prominent expert on Middle Eastern politics from the Foundation for Political, Economic and Social Research (SETA), said: "The PKK and PYD – the PKK's arm in Syria – have long acted in coordination with the regime of Syrian President Bashar Assad and the recent remarks by Muslim signal an undercover threat to the U.S." Additionally, Middle East reporter Çetiner Çetin spoke to Daily Sabah and also underlined that the long-hidden relationship between Assad's forces and the PYD has been revealed and that such a call may benefit the weakened Assad forces.

With the increasing tensions in Turkey following the recent terrorist attack in Suruç that killed 32 people and the killing of a military officer by ISIS militants at the Elbeyli border as well as the continuing terrorist attacks by the terrorist PKK, officials have increased security measures and agreed to take an active role in the U.S.-led anti-ISIS coalition airstrikes.

Prime Minister Ahmet Davutoğlu, asserting that Turkey's war on terror would persist until both ISIS and the PKK were eradicated, said recently that Turkey would not differentiate Syrian Kurds from Turkmens or Arabs in Syria as long as the PYD in Syria does not pose a threat. However, in the interview with London-based Al-Hayat, Muslim said if the necessary conditions are provided then the PYD would join forces with the regime. Muslim further said: "Why not join forces if the Syrian forces are trying to return to the region in a different perspective and under new conditions? In that case the PYD will become a part of the Syrian army." He said the PYD tries to "fight for a democratic and federal Syria."

Acun said the PYD had become more intimate with the U.S. and thus aimed to achieve its regional desire under the cover of combating ISIS. "Ankara's equation of the PKK equals ISIS, thus combating terror comprehensively, had deteriorated the PYD's plans. Following Ankara's new equation, without waiting for U.S.-Turkish cooperation, Salih Muslim aimed to menace the U.S. by indicating in his recent remarks, 'if you side with Turkey we will act with the Assad-Iran bloc,' " Acun added.

Similar to Acun, Çetiner said: "The PYD had ignored Turkey's support during its combat in Kobani against ISIS and achieved great support from all sects. Thus, the PYD aiming to achieve closer ties with the U.S., started 'Biji Obama' [Long live Obanma] chants. However, Turkey's recent cooperation with the U.S. under diplomatic necessity, the new strategy of [the PKK leadership] in the Qandil [Mountains] became 'Biji Assad,' " Çetiner added. Acun said the PYD and Assad regime carrying out a further move against Turkey and the region is not likely because the Assad regime is depleted. Çetiner said during the meeting held in Sulaymaniyah between the Iranian Consul and the PKK that in exchange for support from the Kurds, Tehran would support an autonomous Kurdish region and will recognize it. "The PYD did not achieve what it desired from its 'Biji Obama' strategy and now aims to achieve it through a 'Biji Assad' strategy," Çetiner claimed and said the PYD will be remembered in history alongside the Assad regime.
Last Update: Jul 27, 2015 10:59 pm
RELATED TOPICS