Erdoğan: Reconciliation cannot proceed with those targeting brotherhood, Turkey will not step back in fight against terrorism 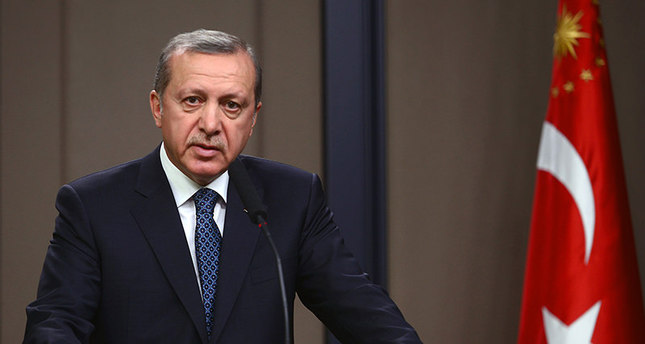 by Nurbanu Kızıl Jul 28, 2015 12:00 am
President Recep Tayyip Erdoğan underlined on Tuesday that Turkey will not step back in its fight against terrorism, and that the process will proceed with determination.

Erdoğan stated that NATO, which will be holding an emergency meeting on Tuesday will take the necessary steps regarding the issue and that the U.S. and Turkey have agreed on a "safe zone." " The establishment of a 'safe zone' will pave way for the return of 1.7 million Syrian refugees from Turkey" the Turkish president added.

The President also noted that it was no longer possible to proceed with the reconciliation process. "Reconciliation process was undertaken with the government's good intentions, but it is not possible to continue with those who target brotherhood" he told reporters. In response to recent demands to close the pro-Kurdish Peoples' Democratic Party (HDP), he said that he opposes party closures, but encouraged the parliament to lift the political immunity of deputies who have links to terrorist organizations such as the PKK.

Turkey has stepped up efforts against terrorism following a suspected ISIS bomb attack carried out last Monday in the country's southeastern Şanlıurfa province which killed 32 people and injured dozens.

Since then, Turkey has initiated a nationwide anti-terror operation, detaining over 800 suspects with ties to the self-proclaimed Islamic State of Iraq and al-Sham (ISIS) as well as the terrorist PKK organization.

The Turkish Air Force has been also carrying airstrikes against the PKK in northern Iraq and the ISIS militants in northern Syria.

The U.S. strongly condemned the PKK's recent terrorist attacks and called on the organization to renounce terrorism and re-engage in peace talks with Turkey in a statement released Saturday night.