President Erdoğan: There is no good or bad terrorist for Turkey 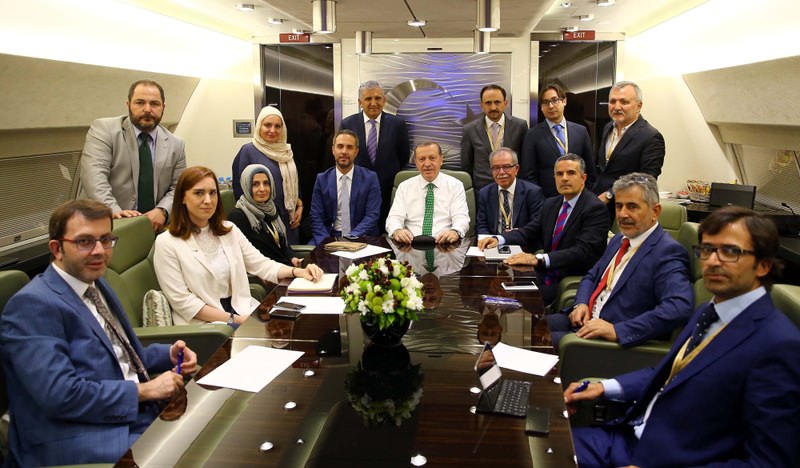 President Erdoğan, speaking to journalists during his flight from China to Indonesia, thanked allies for their support in Turkey's fight against ISIS and the PKK, describing the objective of eradicating ISIS as of paramount importance for Syria's future

President Recep Tayyip Erdoğan, speaking on Thursday to journalists on the Presidential Plane while flying to Jakarta to begin the second leg of his official visits to China and Indonesia, said Turkey did not differentiate between terrorists as good or bad. He said allied and neighboring countries had stood firm in their support for Turkey's fight against terrorism from both the PKK and the Islamic State of Iraq and al-Sham (ISIS), thanking them for their steadfastness. Turkey's counterterrorism measures will continue until terrorism is eliminated, he said.

Erdoğan also said that there was a multi-stage plan to establish peace in Syria and that wiping out ISIS from the region was the first stage. He also spoke of his visit to China, voicing his belief that bilateral commercial links between the two countries will continue to increase in the future and broaden to include other avenues. Erdoğan said Turkey and China are two countries with no political or economic problems and that this had produced an agreement between the two governments to work closer together. He also said Turkey opposed everything China saw as a threat to its territorial integrity. Erdoğan said the two governments had agreed to establish a joint Turkish-Chinese university.

President Erdoğan told journalists that the pro-Kurdish Peoples' Democratic Party (HDP) defended terrorist groups in Turkey and across the region. He said Thursday's terrorist attack that killed five was proof of the PKK's viciousness. "Such attacks won't be left unanswered," he said, adding: "The operations conducted by our armed forces against ISIS and the PKK are proof of this."

He said the reconciliation process had begun while he was prime minister and had aimed to create brotherhood and peace.

"Unfortunately, some tried to exploit the process. Claims that no one was coerced in the recent June 7 elections are simply not true. Some came to me directly to voice their concern over pressure at the ballot boxes," he said.

There were coercive tactics in the southeast and the east of the country to force people to vote for the HDP, the president said. "The reconciliation process should not be exploited anymore. We have introduced unseen freedoms and rights in the past decade. We ended the policies of assimilation," he said.

Discussions switched from, "Should we broadcast in Kurdish for an hour?" to introducing the Kurdish language TRT Şeş, which broadcasts 24 hours a day, he said.

However, when it comes to Turkey's territorial integrity, no one can fault the government for standing up to separatists, he said. "We are a single people. This does not include solely Turks. We are a single people with a population of 78 million. This country is a single state and has a single flag," Erdoğan argued, adding that no one could be discriminated against and everyone has the right to live freely in Turkey.

"What we now see happening in northern Syria is also an attempt [to break] the integrity of a state. They are trying to create a corridor in the north toward the Mediterranean Sea. ISIS was an obstacle and that is why they got involved there," he said, referring to the clashes between ISIS and the Democratic Union Party's (PYD) People's Protection Units (YPG) in the past year.

When asked to comment on PYD Co-Chair Salih Muslim's remarks that he could join Syrian President Bashar Assad's administration, Erdoğan said: "I'm not surprised. The regime used to discriminate against Kurds in the past. Once civil war erupted, the regime started to bargain."

The civil war in Syria had caused the country to become a training ground for all kinds of militants, Erdoğan said, adding that Turkey had banned 16,000 people from entering Turkey and deported 1,600 to prevent them from going to Syria.

He said he had talked to many heads of state and governments in recent times and explained that Ankara would take steps with the anti-ISIS coalition. Erdoğan said Turkey wanted the coalition to include more Muslim countries.

His eventual objective is to establish a government of transition that did not include Assad.

Erdoğan said all the counterterrorism measures taken by Ankara were in accordance with international law, and the U.N., NATO and Iraq were notified before the cross-border operations.

NO LINK BETWEEN TERROR AND COALITION TALKS

When asked whether he believed the recent spike in terrorist attacks was linked to the coalition negotiations to form a government, Erdoğan said: "No, I don't think so. We will see whether there will be a coalition, but a look at the past two or three decades, shows that the longest-lasting one continued for three-and-a-half years. There are some that lasted 16 months only."

He said stability and trust were prerequisites for attracting investment, adding: "During our tenure, there were years when we attracted $22 billion. Before us, there were times when the country barely attracted $1 billion."

He said he was sure the Supreme Election Board (YSK) would consider measures to ensure ballot box security.
Last Update: Jul 30, 2015 11:04 pm
RELATED TOPICS