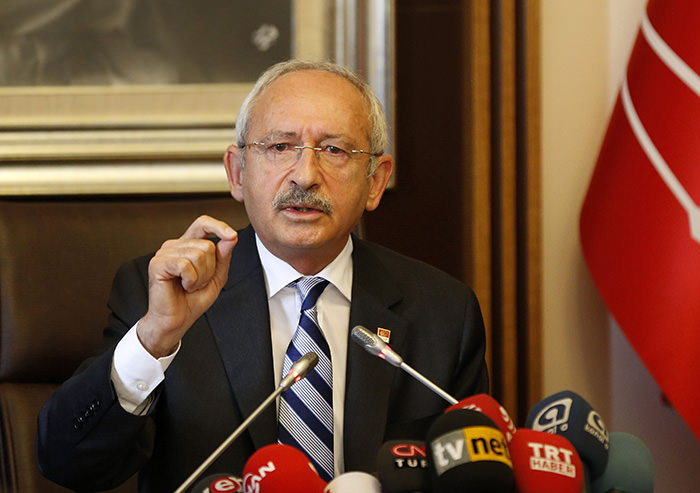 |AA Photo
by Daily Sabah Aug 01, 2015 12:00 am
Republican People's Party (CHP) leader Kemal Kılıçdaroğlu has made significant remarks with regards to forming a coalition government with Turkey's ruling AK Party saying, he will be sorry if the CHP cannot form a coalition government with AK Party. Kılıçdaroğlu said, If the coalition formed will make Turkey leap forward, we are are ready to lose short-term votes."

"We put forward 14 principles to solve five basic problems in coalition talks with the AK Party. In order to solve these five basic problems – economy, the Kurdish issue, foreign policy, education and constitution – a coalition that will have power in the Parliament is needed," Kılıçdaroğlu said during an interview with Turkish daily Hürriyet published on Saturday. "If we can solve these problems [with AK Party], then the coalition will have a meaning," he said.

In response to a question on forming a coalition on the basis of establishing a new constitution, Kılıçdaroğlu said that Turkey's fundemental problem is not the constitution, but rather, Turkey has a problem regarding the mismanagement of events and inability to follow predictable policies.

The June 7 general election results have demonstrated people's will towards forming a coalition government and politicans should respect this will, the CHP leader stated.

"Democracy also requires a consensus culture. It is also very important. A coalition is difficult both for the AK Party and the CHP. AK Party ruled the country alone for 13 years," Kılıçdaroğlu said.

"Now it [AK Party] is forced to come together with a political party that criticized them for 13 years. So there is a difficulty. There are also challenges in our terms. We are meeting with a political party which we criticized for 13 years. Even this alone is actually a very important contribution to the development of democracy," Kılıçdaroğlu further stated.
Last Update: Aug 01, 2015 4:02 pm
RELATED TOPICS