HDP's Demirtaş: State protects itself, PKK should lay down arms 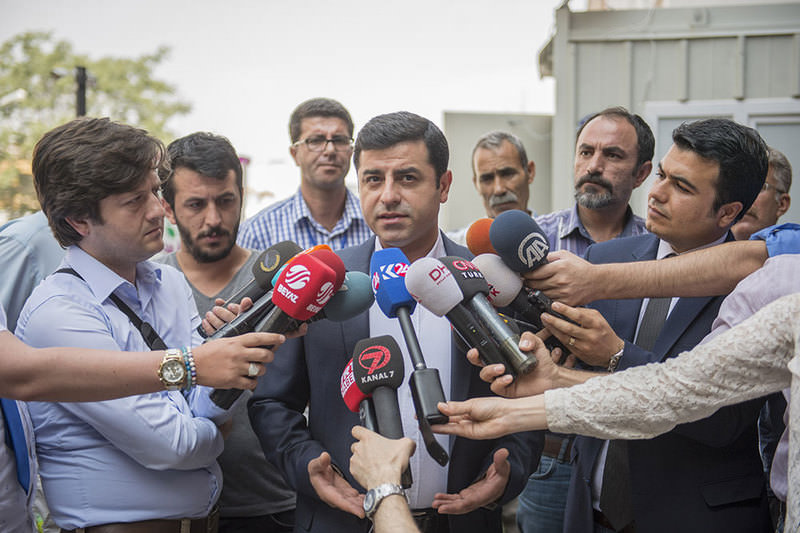 by Daily Sabah with Agencies Aug 02, 2015 12:00 am
Co-Chairman of the pro-Kurdish Peoples' Democratic Party (HDP), Selahattin Demirtaş, called on the outlawed PKK to lay down arms, while admitting that the state has the right to protect itself against armed attacks.

Demirtaş's remarks came while answering to questions by the press prior to an HDP meeting with the party's provincial chairmen on Sunday in Ankara.

"PKK should immediately silence weapons, pull their hands off the trigger. In response, the government should express that it ends the operations (against PKK) and open a way for dialogue in a manner without allowing deaths" Demirtaş said, in a rare and clear statement directed to PKK to end its armed activity.

He also renounced the accusations of making a one-sided call to Turkey's military to lay down arms. "I'm not saying that the state should lay down arms. Would a state lay down arms? There is no state without weapons. The state protects itself; we do not say anything (against this)." Demirtaş said.

However, Demirtaş added that a mutual ceasefire condition should occur in order to politics to function again, and claimed that the government should change its rhetoric over the operations.

Answering a question on how did PKK leadership in Northern Iraq's Qandil Mountains respond to Turkey's military casualties, Demirtaş said that they could not negotiate as current situation lacks legal guarantee that was provided before, while emphasizing the risk of sending a delegation as military operations continue.