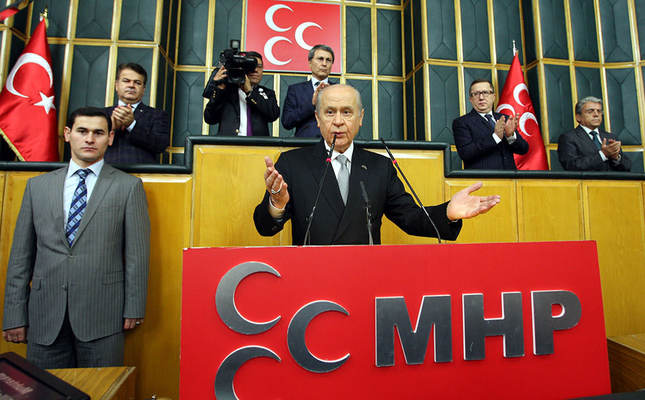 by Daily Sabah Aug 02, 2015 12:00 am
Nationalist Movement Party (MHP) Chairman Devlet Bahçeli, who has made conflicting statements in the past few weeks, posted a message on his Twitter account late Saturday, urging the Justice and Development Party (AK Party) and Republican People's Party (CHP) to form a government to fight terrorism. "I tell the AK Party and CHP, do not linger, do not delay, go ahead and form the government and struggle against terror until it is uprooted," Bahçeli said. "In these conditions in which we tumble from one crisis to another, our lack of peace and calm gains depth and width, no one should dodge the column," he added.

"In these conditions in which we tumble from one crisis to another, our lack of peace and calm gains depth and width, no one should dodge the column," he added.

After the June 7 elections an AK Party-MHP coalition was considered the most probable option due to the closeness between the parties' voters' views, but Bahçeli's harsh statements raised doubts about the coalition. In previous statements Bahçeli imposed the three stipulations of terminating the Kurdish reconciliation process, limiting President Recep Tayyip Erdoğan's powers to those set in the Constitution and restarting the investigation into the Dec. 17 and Dec. 25 corruption probes. Prime Minister Ahmet Davutoğlu said in July that his party has no preconditions for coalition talks, but he underlined that they cannot open up the office of the president to debate. Davutoğlu held a press briefing at AK Party headquarters and announced that Bahçeli refused to be part of a coalition. "MHP leader Bahçeli repeated his opinion of not being a part of a coalition government," he said. "Regardless of success in coalition talks with the CHP, we can still meet with the MHP in the second round and in general," he added.

Davutoğlu said the AK Party still stands at the same distance to all parties, and regardless of success in coalition talks with the CHP, the AK Party will still meet with the MHP in the second round and in general to discuss the problems of the country.

Answering questions about whether issues related to Erdoğan were discussed in the meeting, Davutoğlu said that these issues were not brought to table by the MHP. Sources within the MHP said that in the closed-door meeting Bahçeli said that the AK Party should first try a coalition partnership with the CHP, and if that does not work out then call for early elections.

The recent dialogue and call for cease-fire from 20 members of the Wisemen Committee, a group of intellectuals formed to contribute to, conduct polls and promote the reconciliation process, was also targeted by Bahçeli.

He claimed that the call portrayed Turkey and the PKK as equals and did not condemn terror.
Last Update: Aug 02, 2015 9:47 pm
RELATED TOPICS