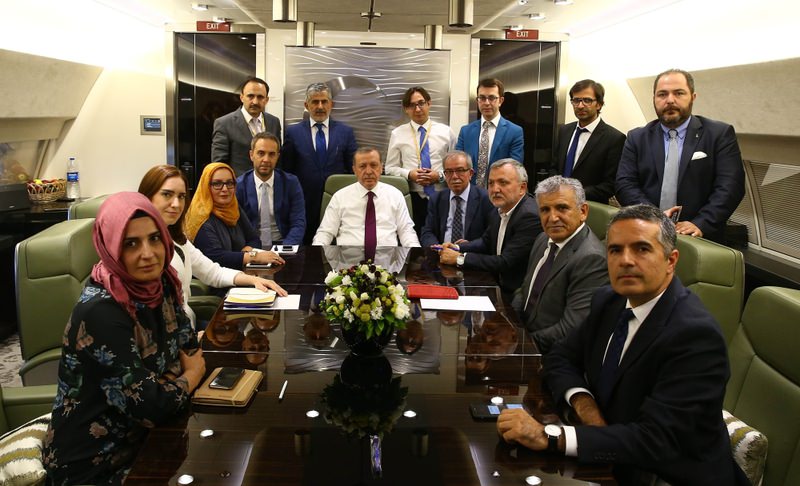 President Erdoğan, speaking to reporters on his way back to Turkey, said measures by Turkish security forces will continue until ISIS is eliminated, adding that he believes Russian President Putin was changing his stance on the Assad regime

President Recep Tayyip Erdoğan, speaking to journalists accompanying him on his way back to Turkey after wrapping up his official visits to China, Indonesia and Pakistan, said the plan to eliminate the Islamic State of Iraq and al-Sham (ISIS) needed to include support by the U.S.-led coalition for moderate opposition forces in Syria through well-protected supply routes.

Erdoğan said Turkey would discuss with its coalition partners how to create the necessary environment for refugees who want to return to their country. "The final decision on the matter will be made at a donors' conference," he said, adding that any plan should take into account the close collaboration between the terrorist PKK-linked Democratic Union Party (PYD) in northern Syria and the regime of Syrian President Bashar Assad. "All coalition countries need to beware of this fact," he said.

Turkey's efforts to prevent Kobani from falling into the hands of ISIS and the shelter provided to 200,000 people who escaped from the city were ignored by some. The coalition will assess the danger posed by the relationship between the PYD and the regime, Erdoğan said. He also added that Ankara would continue to engage in a multi-lateral foreign policy that aims to develop ties to the Shanghai Cooperation Organization (SCO) and other regional institutions in order to expand commercial ties with the economically growing region.

Erdoğan answered questions on fighting ISIS and PKK terrorism, the Gülen Movement and other issues of interest to domestic and foreign affairs from journalists accompanying him.

Q: What is the latest state of Turkish-American relations? Will there be a visit to the U.S. any time soon?

It is not decided yet. If I attend the opening of the U.N. General Assembly, I will be there in September. If not, I may travel to the U.S. sometime this month. I want to open the mosque complex in Maryland while there. A magnificent structure is built there. Consequently, a U.S. trip will involve three stopovers, including to Washington and New York.

Q: What is your take on the latest state of Turkey-U.S. ties?

As you know, I talked to President Barack Obama on July 22 on ISIS. The ISIS attack on our troops spurred a military response after that. Meanwhile, the PKK concentration in the Qandil Mountains was another threat. We were forced to take steps to counter both threats.

Q: How will Turkey and the U.S.'s competing attitudes on the PYD reflect on Turkey's fight against the PKK?

This matter came up when I talked with Obama on the phone during the clashes in Kobani. In response to his fears that Kobani could fall within two days, I had told him that all civilians were in Turkey and Free Syrian Army (FSA) forces with the support of the Kurdish peshmerga could repel any offensive. I warned him that any weapons dropped by planes could end up in ISIS's hands. I had also told him about how the PYD was a branch of the PKK. They refused to understand and dropped weapons. The following developments proved we were right. Eventually 120,000 people returned to Kobani. We cannot tolerate any terrorist concentrations in northern Syria. Our stance is known to the U.S. As our NATO ally and strategic partner, I don't believe the U.S. will tolerate such a threat to Turkey either.

Q: Your statements about Kobani's expected fall were construed by some as being pleased about it.

CAN PUTIN BE PERSUADED ON SYRIA?

Q: Can Russian President Vladimir Putin be persuaded not to support Assad?

In our discussions with the U.S., we are talking about Saudi Arabia and Qatar from the region and France and Britain from Europe also being part of the anti-ISIS coalition.

Putin's current attitude toward Syria is more encouraging than before. Our meeting in Baku and our following phone conversation left me with the impression that he is changing his attitude. He is no longer of the opinion that Russia will support Assad to the end. I believe he can give up Assad.

Q: There are some who believe the recent operations are pushing Turkey toward a regional conflagration. What's your take on that?

This is just not true. Those who come up with such claims want Turkey to end its military operations. Turkey will definitely conduct military operations when necessary. We select an objective and the Turkish Armed Forces will carry it out. Our government, I as the president and the chief of general staff are involved in the discussions.

The first stage of the operations occurred when ISIS became a threat on our border. However, there are also threats posed by the PKK and similar terrorist organizations, both in and outside the country. We cannot keep our silence on that.

The Iraqi government released statements against the bombing of PKK bases in the Qandil Mountains. Their first responsibility should be to ensure there are no terrorist threats emanating from their borders. If they can't, Turkey will do what's necessary to defend itself.

Additionally, we constantly tell the Iraqi government that we are ready to help them combat terrorism. Moreover, the PYD's statement that it may join the regime forces is interesting. We will of course discuss all these with the coalition forces and formulate a roadmap accordingly.

Q: Are ISIS, the PKK and PYD being used against Turkey?

I believe we need to take into consideration the possibility that they have a common interest. What happened in Tal Abyad is an example. First ISIS takes over. Once it withdraws, ISIS and the PYD start fighting. And then the PYD takes over. What is important is that all cities that ISIS withdraws from be returned to their original residents, whether Arabs or Turkmens. How would this happen? Only after their security is assured. The same thing is true for Jarabulus. Once its secure, the residents will be able to return to their homes.

Our support for moderate opposition forces and cooperation with the coalition are very important in this context. The supply routes to the opposition forces need to be secure. What we also want is to allow refugees who seek to return to their homes to do so. Turkey will do what is necessary to ensure that. Other countries also say so. The final decision will be taken at a donors conference.

Q: There are those who see the recent security operations as a return to the 1990s.

I don't believe that. That's impossible. Maybe those who say this want to return to the 1990s. We need to focus on building a new Turkey. Once we do, whatever they say won't matter. You know the PKK promised to disarm in 2013. But they did not keep their promise, even launching a new wave of attacks.

Q: What's your response to the debates over the closure of the Peoples' Democratic Party (HDP)?

As you know, I have always been against the closure of political parties. In 2010, our proposal to change the Constitution to ban the closure of political parties was opposed by the same parties that are present in the current Parliament. Unfortunately, several of our own deputies also betrayed us, and consequently, we couldn't find the necessary 330 votes. That's why that article could not be included in the referendum. If it had been approved, no one would have been talking about it now.

So, everyone knows who wants to close parties or not. My thesis is that we need to separate the individual from the institution. If someone is committing a crime, he or she needs to be punished. There is no sense behind punishing an institution. Currently, there are debates over lifting parliamentary immunity. This is something that Parliament can decide after careful deliberations between the parties. My authority over Parliament's decisions is limited to an extent, and I can only use that authority.

Q: There is an investigation into Selahattin Demirtaş, the HDP co-chair, over his involvement in the Kobani protests.

It would not be right for me to comment on such an issue. It is a judicial matter. The prosecutor has launched an investigation, and now it is a matter for the judiciary.

Q: There are claims that many Gülen Movement-linked police officers were transferred to the southeast as part of efforts to combat the group and this allowed them to sabotage counterterrorism efforts. What's your opinion?

The Gülen Movement's presence in the region is just one of the factors that threatens our national security. There are some who try to create a judicial structure within their illegal organizations. We tell all the relevant authorities in these regions to never allow such developments. Whether the transfers affected counterterrorism effects is a matter that needs to be investigated. Sound assessments of developments will result in more successful results, in my opinion.

Q: What were the results of the discussions over the Uighur Turks in China?

The Xinjiang Autonomous Uighur Region came up during our discussions. The only issue that concerns China on the issue is terrorism. They are naturally concerned about some Uighurs joining terrorist groups, including ISIS, and posing a threat to China's national integrity. I need to say that we are also aware that some Uighurs have joined ISIS. I held discussions with members of the China Islam Association. They said there are 35,000 mosques and 40,000 religious officials in China. I told them that China was the second most powerful country in the world and may become the most powerful within the next 10 to 15 years. I told them to strengthen their standing within this strong country and support the integrity of the country. Our sincerity was welcomed by Chinese officials.

Q: Does Turkey have any requests from KRG President Massoud Barzani in light of the recent developments?Our Foreign Ministry undersecretary went to northern Iraq to discuss this matter. I don't yet know the results. Once we reach Turkey, we will discuss the matter. I believe there will be positive progress.

Q: What will be the effects of the recent terrorist attacks and rumored delays in forming a coalition government on the economy?

I personally don't believe Turkey will face any serious economic challenges as a result of the recent developments. There may be some short-term problems, which Turkey will overcome if a healthy transfer of power is ensured. I don't believe these will affect the tourism sector either. For example, once the number of Russian tourists declined, the increase in the number of German tourists more than compensated. There is also the fact that tourists coming to Turkey are spending more money these days, which is a very positive development.
Last Update: Aug 03, 2015 9:27 am
RELATED TOPICS