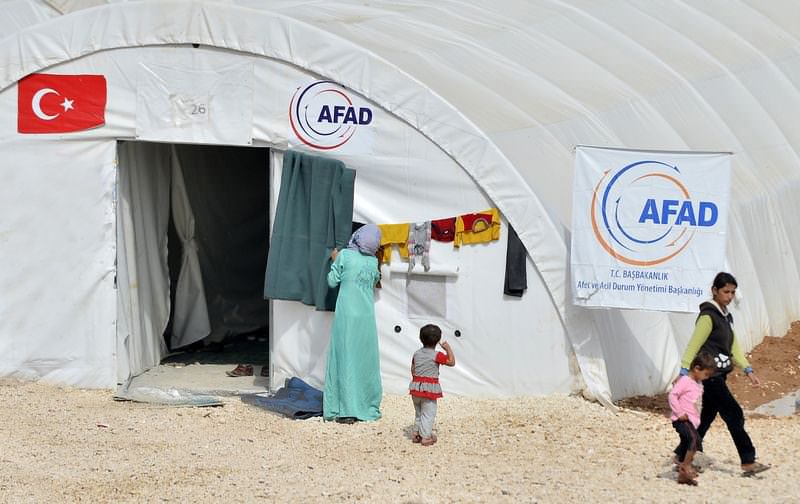 As Turkish and U.S. talks on forming a safe zone in northern Syria continue, the AFAD president said establishing refugee camps in the zone would only be a matter of 24 hours for the agency, which already takes care of thousands of refugees in camps across southern Turkey

The president of the Prime Ministry Disaster and Emergency Management Authority (AFAD), Fuat Oktay, referring to the proposed safe zone created in northern Syria, said the agency has taken all the necessary precautions and is ready for preparations of refugee camps in the zone. Signifying that Turkey is directly affected by what happens in Syria, Oktay said: "The truth is that Turkey cannot take any more refugees, we are at full capacity. You cannot expect a country to take care of millions of refugees by itself. Turkey is trying to do what is necessary to maintain its security." Officials say that AFAD will be able to establish new refugee camps within 24 hours of instruction.

Speaking to Sabah daily, Oktay claimed that there is a significant smear campaign and perception management concerning refugee camps in Turkey and said that everything regarding the camps is clear. "The U.N. awarded us last month for having the best system regarding refugees. While the world appreciates us, in Turkey, we are facing smear campaigns," Oktay said. "All staff in the camps have to pass a background check. All of the refugees are biometrically scanned and have biometric identities on them. In the camps we do not only provide shelter, we also help them to have a future," he added. Oktay said that whatever happens in Syria has a reflection in Turkey and that Turkey is at full capacity and could not endure taking in more refugees.

Regarding the proposed safe zone, he said that Turkey had been advocating for it from the start and all of the required precautions were taken against risks, which they would be ready to carry out when instructions are received. He added that no one could expect one country to endure millions of refugees on its own and Turkey was doing what was necessary for its own safety. According to sources, after the Turkish border is cleared of Islamic State of Iraq and al-Sham (ISIS) militants and a de facto safe zone is established, AFAD will be able to construct refugee camps within 24 hours.

Oktay also claimed that the Democratic Union Party (PYD) was trying to demographically restructure the region: "The PYD is trying to demographically restructure Tal Abyad. Some 24,000 people have sought refuge in Turkey, escaping from this town. While it is supposed to be a safe zone, thousands of people cannot return." Regarding the efforts against chemical weapon attacks, he said: "Our hazmat units are stationed in cities such as Hatay, Urfa and Kilis near the Syrian border. [Syrian President Bashar] Assad is known to use chemical weapons and this threat is not over yet. We are conducting continuous scans in the area."

After Ankara and Washington agreed to establish a safe zone in Syria along the Turkish border to ensure security and stability, Turkish officials have said that the safe zone, which is expected to cover a 110-kilometer area west of the Euphrates River stretching to the province of Aleppo, is to provide conditions for refugees to return to Syria. President Recep Tayyip Erdoğan said last month that creating a safe zone in Syria will provide the necessary basis for Syrian refugees to return to their country.

"As you can understand, cleansing the region of all threatening elements and establishing a safe zone constitutes the basis of 1.7 million Syrian refugees' return," Erdoğan said.

Meanwhile, sources in Ankara reported that the necessary steps, which require providing conditions for refugees to return to Syria, were discussed in the last Cabinet meeting last week. Accordingly, after expelling ISIS militants and other threats from the proposed safe zone, AFAD will build refugee camps inside Syria as a first step. Other infrastructure investments such as building roads and permanent accommodations are planned as a next step. The Prime Ministry Housing Development Administration (TOKİ) has already begun preliminary works to build houses and schools and a hospital in order to drive refugees to return to Syria, sources have reported.

Turkey's opening its borders to hundreds of thousands of Syrian refugees since the outbreak of the civil war has come at a substantial cost to the government, as it has spent nearly $6 billion to provide for the well-being of refugees currently in the country. Turkey is home to more than 2 million refugees, and officials have said that the country cannot absorb any more. More recently, EU Minister and Chief Negotiator Volkan Bozkır said that refugee-related problems may spread to Europe if EU countries do not share the burden. "This issue is not only Syria, Iraq and Turkey's problem. As long as the U.S. and EU countries do not cooperate to eliminate the causes of the refugee problem and fight terrorism, it will spread," Bozkır said in an interview with Daily Sabah last week.
RELATED TOPICS