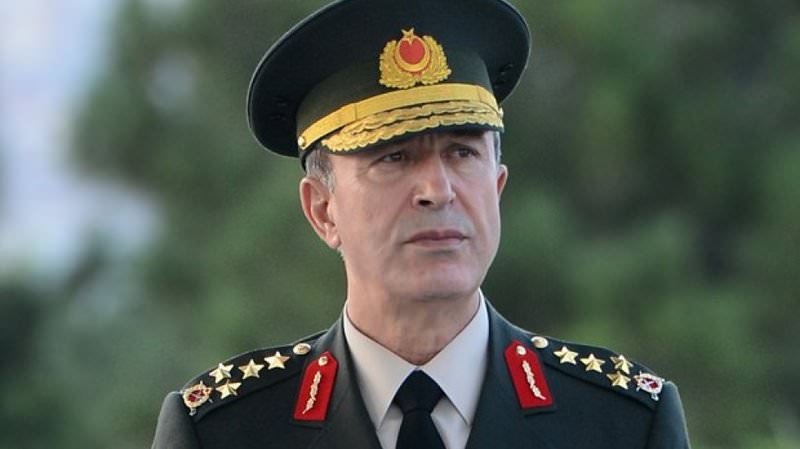 by Daily Sabah Aug 04, 2015 12:00 am
Commander of Turkish Land Forces, Hulusi Akar, was appointed as the new chief of General Staff on Tuesday, on the second day of Turkey's Supreme Military Council meetings.

Salih Zeki Çolak filled Akar's position as the new Commander of the Turkish Land Forces. Air Force Commander General Ali Öztürk was made a member of the Supreme Military Council and his position was given to General Abidin Ünal.

Deputy Chief of Staff Yaşar Güler will also continue to serve as General, making him the strongest candidate for Chief of Staff in 2019 after Hulusi Akar.

Navy Commander Admiral Bülent Bostanoğlu's term of office was extended for one year. Continuing his duty as the Naval Commander with the rank of vice admiral, Veysel Kösele rised in rank to admiral.

The final decisions were made public after Turkish President Recep Tayyip Erdoğan's approval, as was announced by Presidential Spokesperson İbrahim Kalın at a press meeting on Wednesday.

Akar played a significant role in the operation to relocate the Tomb of Süleyman Shah, which allowed the government to minimize the risk of unplanned involvement in regional clashes. Akar has also been invited by U.S. Army Chief of Staff Gen. Ray Odierno to Washinton in late January 2015. During the visit, Akar observed U.S. military units and institutions and also discussed routine military cooperation, joint training and military exercises. In efforts to prevent and minimize the flow of foreign terrorists as well as to prevent the flow of PKK fighters and ISIS terrorists into Turkey by making use of Turkey's open-door policy for refugees, Akar established comprehensive strategies and informed government officials at all National Security Council (MGK) meetings.

According to the Land Forces website, Akar graduated from military academy as an infantry officer in 1972. He served as a commander in Bosnia in 1997 and 1998, for which he was awarded the U.S. Order of Merit, before returned to Turkey to command the Internal Security Brigade.

He was given the Courage and Self-Sacrifice Medal for his outstanding achievements in internal security operations.
He was made Land Forces commander in 2013.