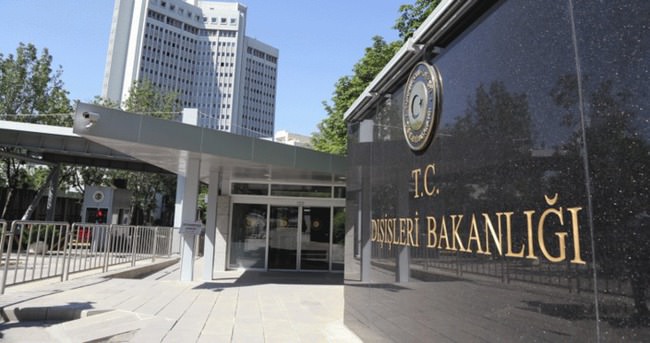 by Daily Sabah with AA Aug 06, 2015 12:00 am
Turkey has condemned comments made Tuesday by Arab League Chief Nabil Elaraby in which he criticized recent Turkish military operations against PKK bases in northern Iraq.

"We condemn and refuse the statement made by Arab League Chief Nabil Elaraby yesterday [Tuesday] regarding the operations launched by Turkey against the PKK nestled in northern Iraq," the Foreign Ministry said in a statement Wednesday.

"Such an attitude against Turkey's determined struggle against terror – based on international law – is impossible to understand given that the Iraqi government has openly declared that it is not able to prevent the terrorist attacks of PKK on Turkey and its citizens from its territory," the statement said.

Ankara also criticized Elaraby for not raising his voice when the PKK "declared an autonomous canton in some parts of Iraq," calling on him to support not terror, but the fight against it. Elaraby's latest remarks were not consulted on among the Arab League members, and reflect his personal opinions, the ministry statement said, citing reactions from the member states, including Qatar, which said Elaraby's statement had not been discussed with the member states before it was released.

Arab League's Mohamed al-Fatah Naciri was summoned to the ministry, and said Elaraby's statement was unacceptable, the statement added.
On the other hand, Qatar has broken ranks with the Arab League to give close ally Turkey its full support for airstrikes conducted against the PKK, according to an official foreign ministry statement.

In the statement released by Qatar's official news agency late on Tuesday however, Doha distanced itself from the Arab League declaration.
"The statement issued... on behalf of the Arab League was not discussed with the league member-states before releasing it. Qatar reiterated its full solidarity with the Republic of Turkey for its actions and measures to protect its borders and preservation of its security and stability," the statement read.

Relations between Qatar and Turkey have grown increasingly warm in recent years and 2015 has even been named by the countries as the "Qatar-Turkey Year of Culture."

Turkey carried out the airstrikes in recent weeks against PKK targets in northern Iraq.

After Turkey started its air operations against the terrorist organization Qatar condemned the "heinous acts" that caused the deaths of numerous civilians and military personnel by the PKK in several cities of Turkey.

"While the Ministry of Foreign Affairs condemns the cowardly and heinous acts that pose a threat to security and stability in today's notice, it also expresses that Qatar is in solidarity with its sister nation, the Republic of Turkey, and supports all of the security measures taken by Turkey in order to maintain its border security and stability," the official Qatari statement read.

After Turkey started hitting Islamic State of Iraq and al-Sham (ISIS) positions in Syria and PKK hideouts in northern Iraq, Turkey's regional and global partners expressed their support for the military actions and condemned deadly attacks by the terrorist groups.

U.S. State Department spokesman John Kirby said that the U.S. has long recognized Turkey's recent counterterror operations as a right of defense. "Turkey has continued to come under attack by PKK terrorists, and we recognize their right to defend themselves against those attacks," Kirby said.

"What we're trying to focus on here is a coalition to go after ISIS," he said. "I recognize that in some cases, the PKK has fought against ISIS, but they are a foreign terrorist organization [FTO]; we've designated them as an FTO. And our fight against ISIS is not in cooperation with, coordination with or communication with the PKK." He added that he was not sure if the airstrikes against the PKK have concluded and said Turkey's ongoing operations against the PKK would not weaken the U.S.'s determination to fight ISIS.

U.N. Secretary-General Ban Ki-moon offered sympathy to Turkey after a recent wave of attacks. His spokesman said the U.N. chief "expresses his deepest condolences to the government and people of Turkey in the face of recent violent terrorist attacks."

The president of the Kurdistan Regional Government (KRG) in northern Iraq, Masoud Barzani, issued a statement, saying: "The agreement between Turkey and the U.S. in striking ISIS is an important step for us. … Turkey's military involvement in this war carried out by the U.S.-led alliance will dramatically change the state of affairs." He also slammed the PKK for its terrorist activities, including blowing up an oil pipeline between Turkey and Iraqi Kurdistan.