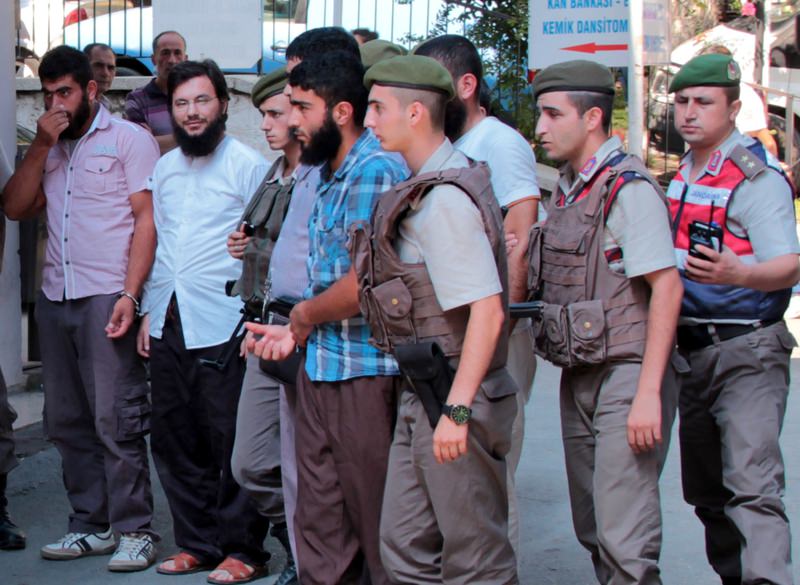 by Anadolu Agency Aug 08, 2015 12:00 am
In an operation early on Friday carried out by the Manisa Police Department teams, 17 people suspected to be Islamic State of Iraq and al-Sham (ISIS) militants were detained. Manisa Police Department's Counter Terrorism Division teams, together with Gendarmerie forces, launched simultaneous operations in the city center.

The suspects had allegedly been in contact with ISIS militants on the ground and had been distributing propaganda in the city with the aim of raising money for the terrorist organization. The detainees were taken to the Counter Terrorism Headquarters following a health check.

President Erdoğan on Saturday said measures by Turkish security forces will continue until ISIS is eliminated. In this regard, Turkey has consolidated its alliance with the U.S. to combat ISIS by way of airstrikes, allowing the U.S.-led coalition to use the İncirlik Air Base. Additionally, the police department has been launching operations against ISIS, detaining hundreds of militants across the country.

Sources at the Prime Ministry have recently released statistical data regarding the fight against ISIS. Since the official declaration on Oct. 10, 2013, which defined ISIS as a terrorist organization, Prime Ministry sources indicate that 1,350 people have been deported and 13,500 people from 98 countries have been barred from entering Turkey. It said that 18 percent of the 13,500 people who were barred from entry originated from Europe and North America, and 56 percent originated from North Africa and the Middle East. On the subject of Turkish participants joining ISIS, sources asserted that 800 to 900 Turkish nationals had joined the group estimated of 25,000 ISIS fighters.
RELATED TOPICS