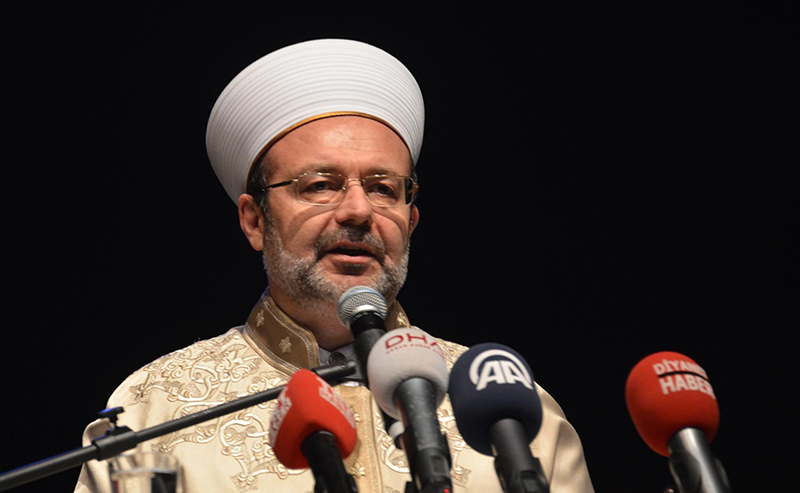 Mehmet Gu00f6rmez, the head of Turkey's Directorate of Religious Affairs (DHA Photo)
by Nurbanu Kızıl Aug 09, 2015 12:00 am
Turkey's Directorate of Religious Affairs (Diyanet İşleri Başkanlığı) has prepared an extensive report which states that ISIS inflicts the most damage on Islam and Muslims, and that it should not be associated with Islam, while enlightening citizens, especially the youth about the dangers of the terrorist organization.

The report, which contains numerous sections including the targets, tactics, slogans, and activities of ISIS was recently presented to Mehmet Görmez, the head of Turkey's Directorate of Religious Affairs. Accordingly, findings of the report are expected to be forwarded to mosques and local religious offices to be conveyed to the public during sermons.

Explaining the methods and tactics used by the terrorist organization to recruit members, the report states that ISIS exploits religious sentiment such as jihad and martyrdom to draw the youth's attention.

The report highlights that the extermination of defenseless civilians contradicts Islamic principles.

"It is not possible to draw parallels between a structure which builds itself on the extermination and deportation of civilians -including children and women who are victimized as a result of conflicts based on interest- with Islam," the report said.

It was also noted that Islam does not permit Muslims to indiscriminately declare others as "unbelievers" and confiscate their properties or kill them.

The issue of jihad was also highlighted in the report, which stated that Islam does not allow killing or torturing women and children even in a state of war, while noting that Islam strictly prohibits killing prisoners of war after they are taken captive. It highlighted that beheadings have no precedence in Islam and that practices adopted by ISIS have nothing to do with Islam.

"It would be a major insult to Islam to claim all such terrorist activities stem from Islamic interpretation," Görmez said.

He stated that it is crucial for all Islamic scholars, teachers and educational institutions throughout the world to touch upon this issue.

Turkey is one of the first countries to declare ISIS a terrorist organization.

On July 24, Turkey launched airstrikes against ISIS based on intelligence reports about an imminent attack against border patrol units.

Mehmet Görmez had previously denounced ISIS for portraying a wrongful image of Islam and Muslims, and he had highlighted that they contradict the notion of Islam, which is based on peace, toleration, understanding and love.

ISIS was once part of al-Qaeda but was disowned by the organization due to its aggressive stance against other opposition groups in Syria, including al-Qaeda's official Syrian branch, Jabhat al-Nusra. Their attacks have killed and displaced thousands of people in Iraq and continue to threaten the lives of millions of people throughout the region.