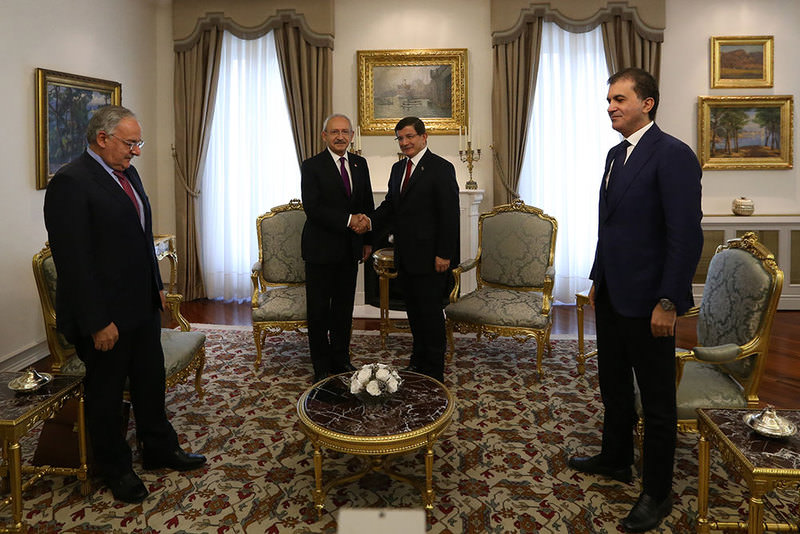 by Daily Sabah with AA Aug 10, 2015 12:00 am
Leaders of the Justice and Development Party (AK Party) and the Republican People's Party (CHP) met at the Prime Ministry in Ankara on Monday evening as the August 23 deadline to form a coalition looms close. The meeting between the two leaders lasted for four hours and 20 minutes.

Prime Minister Ahmet Davutoğlu and CHP leader Kemal Kılıçdaroğlu have held a final discussion after their respective parties ended a series of "exploratory" talks over forming a coalition.

Following the meeting, CHP spokesman and deputy chairman, Haluk Koç held a press meeting at 11 p.m. local time at the party's headquarters, where he said that both AK Party and CHP maintained a stance during the talks for the good of the nation. He further said, both parties' leaders will meet once again either on Thursday or Friday.

On the other hand, from the AK Party side, Culture Minister Ömer Çelik held a press briefing regarding the coalition meeting, during which he said, Davutoğlu and Kılıçdaroğlu have shared their opinions in a congenial atmosphere. "We are holding meetings so as not to leave Turkey without a government," Çelik said.

Talks between the AK party and the CHP lasted for 35 hours during five separate sessions until August 3.

Meanwhile, Leader of Nationalist Movement Party (MHP) Devlet Bahçeli issued a written statement on Monday, calling for an immediate formation of a coalition government between the AK Party and the CHP.

"These two parties should not avoid taking the big responsibility that history has put them in and should show their will and attention to form a government in line with national interests," Bahçeli said.

He also urged the two parties to hold coalition negotiations "without behaving reluctantly or having imaginary discussions involving infertile standoffs".

"The CHP is close to a coalition if its political counterpart comes close to the 14 principles; if they [AK Party] get away from these principles, we will also move away," Özel told reporters at the parliament Monday.

Özel said that the two parties were at a "critical phase" after the preliminary meetings ended, adding that the two sides would hold talks aimed at coalition protocol or part their ways and move on in accordance with their positions.

The leftist CHP, which came out second in the June 7 elections and currently has 131 seats in the parliament, seemed the most likely coalition partner, with the pro-Kurdish Peoples' Democratic Party (HDP) ruling themselves out of any partnership with the AK Party.

In the case that the deadline expires without a government, either President Recep Tayyip Erdoğan or the parliament may decide to hold a new election. If Erdoğan issues the decision, the polling is supposed to be held in the first Sunday following a 90 day period starting from the end of the first deadline.

However, if the parliament makes the decision for a new election, then the Supreme Election Board can reduce the 90 day period by as much as half.

The last coalition talks in Turkey were made 16 years ago, when the Democratic Left Party (DSP) of the late premier Bülent Ecevit failed to win the majority at the general election on April 18, 1999.

Since 2002, the AK Party won three general elections to continue a single-party rule for well over a decade, which ended after the June 7 elections this year produced no majority government.