Coalition mystery to unfold on Thursday with slim odds, MHP still an option 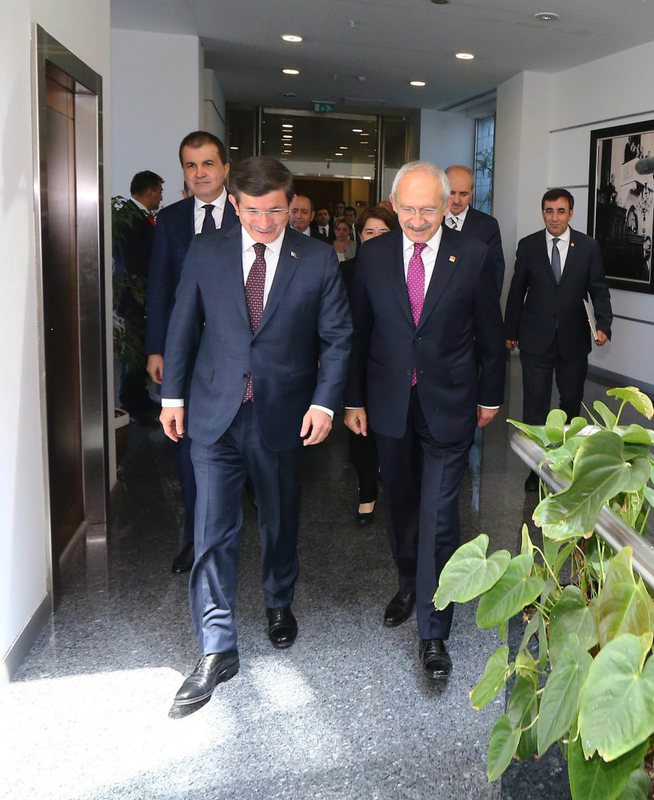 by Yunus Paksoy Aug 13, 2015 12:00 am
As the public looks forward to the final decision on whether a coalition government is going to be formed, Justice and Development Party (AK Party) and Republican People's Party (CHP) leaders are to meet at 2:00 p.m. on Thursday, at the Ankara Palace State Guesthouse to make their final decision publicly known. Hopes for a possible coalition, however, are rather slim. After 35 hours of exploratory talks between the delegations and a meeting on Monday between the chairmen of both the AK Party and CHP, the public is only a meeting away from finding out the ultimate decision that will determine Turkey's next government.

While all eyes will be on the post-meeting news conference, interim Prime Minister Ahmet Davutoğlu on Tuesday at the Honorary Medal ceremony for the Chief of General Staff Gen. Necdet Özel said that nobody should expect a historic statement. However, Davutoğlu added: "We are still working on the formation of a coalition government."

Furthermore, Davutoğlu expressed his satisfaction with the process carried out in a civilized and polite way with mutual understanding that left no room for offensive remarks from both sides.

In response to a question about whether the AK Party will hold a meeting with the Nationalist Movement Party (MHP), Davutoğlu said: "I said in the beginning that we are not going to cut off communication with any party. If needed, we are going to hold a meeting. After reviewing the situation [with the CHP], we may consider that. We are in a place where everyone should take responsibility. I will do anything [I should] as I am given the mandate to form a government."

When asked whether the sides will be able to finalize the talks by Aug. 23, Davutoğlu said: "Even 24 hours is a long time in politics. There will be enough time when we want to get a result. The important thing is that Turkey does not continue without a government."

Touching on the alleged tension in politics among parties, Davutoğlu blamed the Peoples' Democratic Party (HDP) for being indecisive on the terrorist organization, saying: "There is no tension in politics at all except for the HDP. The reason for this is the indecisive behavior of the HDP over terror incidents. We call on them to condemn the attacks."

Meanwhile, CHP Chairman Kemal Kılıçdaroğlu on Tuesday held a meeting with the executives of several trade unions. According to Turkish media, Kılıçdaroğlu reportedly said that he does not expect a coalition. However, during the meeting where CHP Vice Chairman Selin Sayek Böke and Yakup Akkaya were also present, Kılıçdaroğlu added that an announcement will be made on Thursday.

In addition, CHP Deputy Chairman Haluk Koç said in a written statement that the Central Executive Board (MYK) has given Kılıçdaroğlu full authority with respect to the formation of a coalition government. Koç also emphasized that every wasted moment in the process costs 77 million Turkish citizens.

As the AK Party and CHP are to decide on the formation of a coalition government, MHP Chairman Devlet Bahçeli released a written statement on Monday that said: "These two parties should not avoid taking on the huge responsibility that history has placed on them, and should show their will and attention to form a government in line with national interests."
Last Update: Aug 13, 2015 3:53 pm
RELATED TOPICS