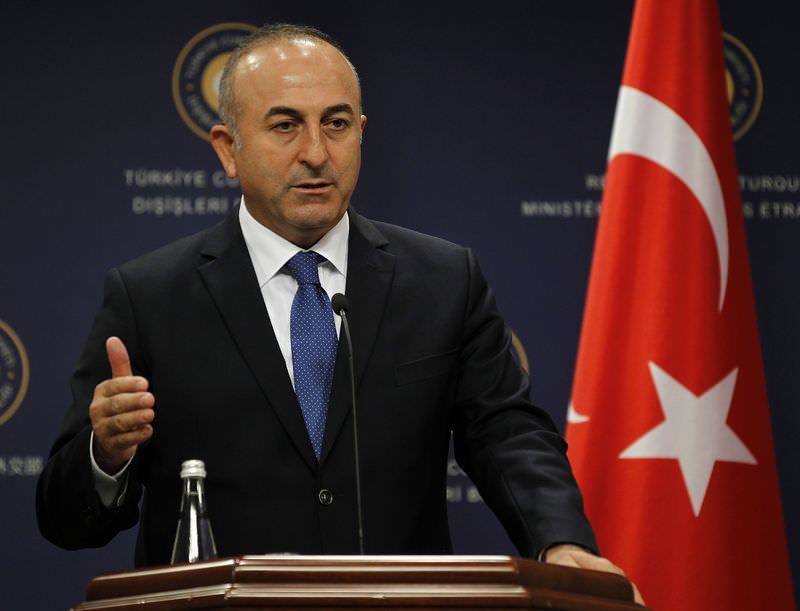 by Yunus Paksoy Aug 13, 2015 12:00 am
Foreign Minister Mevlüt Çavuşoğlu on Thursday in an interview with HaberTürk television hinted at the chances of deploying ground troops in Syria in an attempt to fight the Islamic State of Iraq and al-Sham (ISIS), saying the odds are lean, yet the option is still in the cards.

In the interview Çavuşoğlu commented on the much-debated issue of sending ground troops into Syria. Çavuşoğlu has not ruled out a ground operation but reiterated Ankara's firm stance on fighting ISIS: "Right now, no ground operation is envisaged, but in the future whatever is needed to combat ISIS, including ground operations, should be done. This is my personal opinion."

Pointing to the support for moderate opposition forces, Çavuşoğlu said: "On one hand there is a fight in Iraq, on the other hand in Syria. Airstrikes will make it easier for them." Regarding a possible large-scale strategy in an attempt to combat ISIS, Çavuşoğlu added: "Other steps might be needed if an extensive and result-oriented strategy against ISIS is to be carried out. However, no such thing is envisaged at this stage."

Syrian opposition drives back ISIS after coalition strikes from İncirlik

The Free Syrian Army (FSA) on Thursday advanced against the Islamic State of Iraq and al-Sham (ISIS) for the first time since January 2014 following airstrikes being conducted from İncirlik Air Base as of Aug. 12.

According to local media reports, coalition forces have bombed ISIS positions in Syria's Toybuk, Um Nahr, Um Hosh and Soran Guni districts, which are located across from Turkey's southcentral Kilis province. Jabhat al-Sham forces that are affiliated with the FSA and Turkmen forces have reportedly started attacking ISIS from Harjala village and were able to drive the terrorist organization back 2 kilometers.

The U.S. military said it launched its first manned airstrikes on ISIS targets from İncirlik Air Base in Turkey on Wednesday. In a statement to Daily Sabah, an official from the Command Joint Task Force-Operation Inherent Resolve (CJTF-OIR) said the United States on Wednesday began flying manned counter-ISIS missions from the İncirlik Air Base in Turkey. The CJTF added that strikes were conducted during the missions.

"These missions are part of Combined Joint Task Force-Operation Inherent Resolve, and the strikes will be included in CJTF-OIR's daily strike updates," the statement added.

This follows Turkey's announcement last month that it would open its bases to the United States and coalition members' air operations against ISIS, as part of deeper U.S.-Turkey counter-ISIS cooperation.