Germany will never get any criminal from Turkey if it refuses to extradite ex-prosecutors: Erdoğan 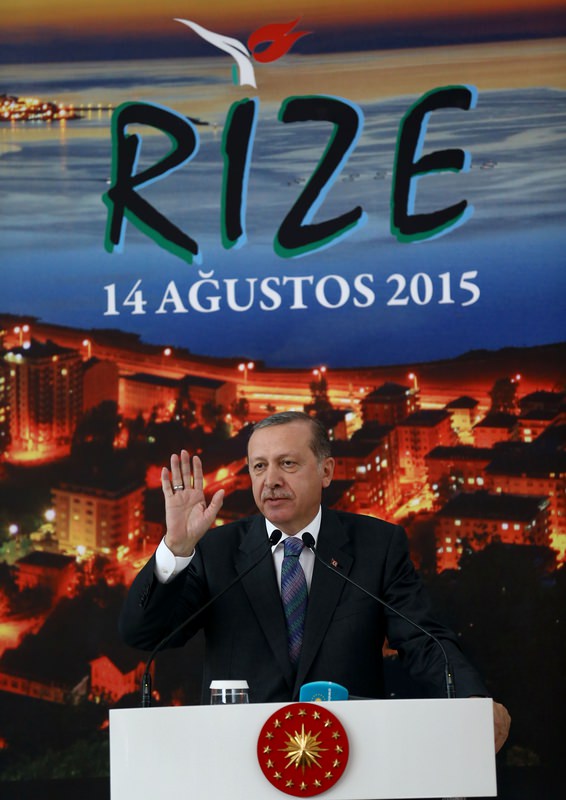 by Emre Başaran Aug 14, 2015 12:00 am
In his speech to the representatives of non-governmental organizations during his visit to Rize on Friday, President Recep Tayyip Erdoğan gave a strong message to German officials concerning the escape of Gülenist ex-prosecutors Zekeriya Öz and Celal Kara. The two ex-prosecutors are now known to be in Germany, and Erdoğan demanded their extradition in his speech.

"We will issue red notices for the two fugitive ex-prosecutors who have strong links to the parallel state," he said, referring to the Gülen Movement, the organization members of which have tried to topple the government. "We will see what Germany will do for the extradition of these fugitives. Should German officials refuse to extradite the Gülenist ex-prosecutors, then Germany will never get any fugitives back from Turkey again," the president added.

Saying that Turkey is under collective attack from its enemies, he said that the Gülen Movement and certain media sources target Turkey's development and welfare. "We are witnessing the coalition of a great treason network, the parallel state, several media sources and some so-called intellectuals. Over 100 members of the treason network, who accused me of fleeing the country when I went abroad to pay official visits during the Gezi incidents and the December 17-25 process, have fled the country. But I am here, I am with my nation," said Erdoğan.

"The fugitive ex-prosecutors have fled the country. First to Georgia, then to Armenia, and now to Germany. In my opinion, a red notice will be issued soon for the two fugitives. We will closely follow Germany's attitude on the matter. Should Germany refuse to extradite the ex-prosecutors, then it will never get any criminals back from Turkey again, I will never allow it. Turkey is not a banana republic," he further stated.

"Turkey is on the verge of an awakening"

Speaking about Turkey's struggles in forming a government, fighting against its enemies and terror organizations, he said that every individual should stand on the nation's side. "I am putting this straight; anyone intending to be neutral in critical issues regarding Turkey's future will ultimately lose. No political aim, personal interest, resentment or anger can be the excuse to leave Turkey alone in its struggle against terror and its enemies, " the president added.

"I will not be the president they want"

Implying the criticism he draws from certain political spheres and personalities, Erdoğan said that he will not be the president they want. "They say that I interfere with every affair. They have to prove this claim. I know my rights as the president and I completely abide by the constitution. They accuse me of every problem or matter. They accuse me of the PKK terror, they even accuse me of the ongoing war in Syria. But they have never been able to prove any baseless claims directed at me. I am putting this straight, I will not be the president they want," he added. Speaking about his promise he gave to the nation before being elected president, he said that he will always be on the nation's side as he promised.