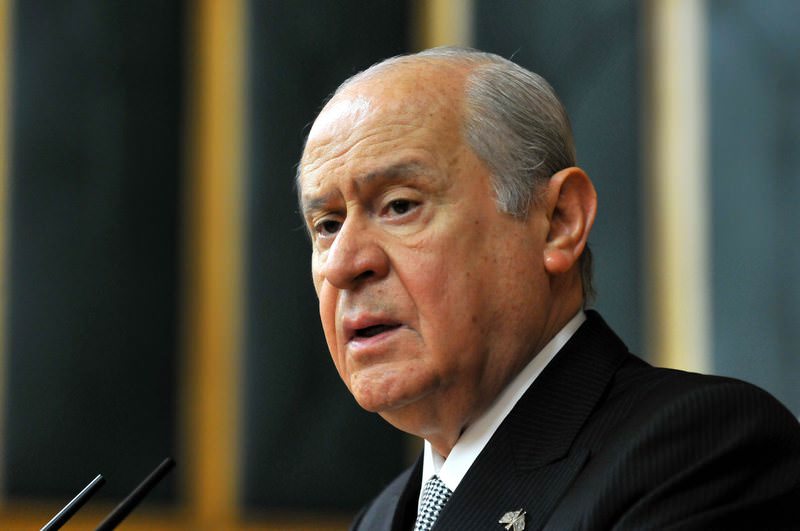 by Yasemin Nicola Sakay Aug 14, 2015 12:00 am
Shortly after accepting Prime Minister Ahmet Davutoğlu's request to meet over coalition talks, the Nationalist Movement Party (MHP) leader Devlet Bahçeli gave a statement on Friday saying that they oppose a snap election and they want no part in a minority or a caretaker government.

As the grand coalition between the Justice and Development Party (AK Party) and the Republican People's Party (CHP) failed in Thursday's talks, Prime Minister Davutoğlu said that snap elections became 'the only option' for Turkey as MHP had made it clear that it wanted to stay out of a coalition government.

However, MHP leader surprised Turkey and accepted the prime minister's invitation for a meeting for coalition talks. The two leaders agreed to meet at the Turkish Parliament on Monday at 02.00 p.m.

"The Nationalist Movement Party is open to a meeting with the AK Party, with the previous preconditions," said the MHP leader in his written statement released late Thursday.

Emphasizing that the 45-day period to form a government is coming to an end and time is running out, Bahçeli said that he was disappointed by the failed coalition talks between AK Party and the CHP which lasted over 50 hours on three separate occasions.
Expressing his hope to form a government as soon as possible, the leader urged all parties to solve this political deadlock and seek the good of the nation.

The nationalist leader also said that if a grand coalition is out of the question, it will proceed to coalition talks with the AK Party.

Davutoğlu and Bahçeli are scheduled to meet on August 17 to discuss coalition government options, even though the MHP leader had previously said that it does not want a coalition with the ruling party.

Davutoğlu has until Aug. 23 to find a coalition partner and if a government is not formed President Recep Tayyip Erdoğan will have the authority to call for a snap election.

If parliament makes the decision for a new election, then the Supreme Election Board can cut this 90-day period by as much as half.
Last Update: Aug 15, 2015 4:12 am
RELATED TOPICS