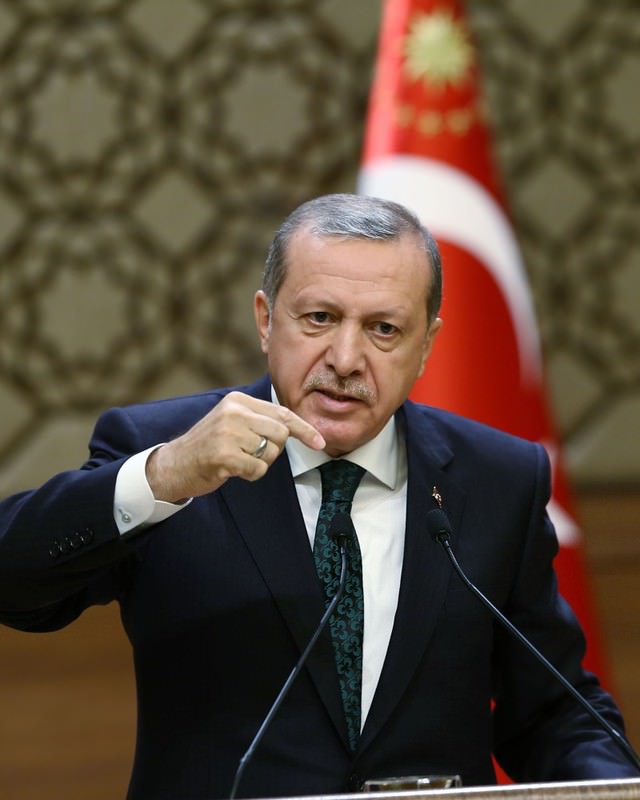 As the PKK struggles with heavy losses from Turkish air strikes in northern Iraq, President Erdoğan vowed to fight until the country is cleared off all terrorists. He also called on the central Iraqi gov't to act against PKK terrorists before criticizing Turkey's operations

President Recep Tayyip Erdoğan paid a visit to his hometown of Güneysu in Rize province for a two-day trip where he assured the public that Ankara will resolutely continue to combat terrorist organizations in the country, as the unraveling inside the PKK increases day by day in the wake of airstrikes and police raids targeting the terrorist organization.

Back in Güneysu for the first time in a while for the inauguration of Hacı Hafız Yusuf Yılmaz Mosque, Erdoğan called on Iraq to deal with PKK presence within its borders or Turkey would do so. The PKK's leadership and significant number of its fighters are located in the Qandil region of northern Iraq. With respect to the ongoing counterterror operations, Erdoğan said: "Our resolution will continue along the same line. No complacency, no break, we will continue with the same determination."

Erdoğan was not easy on those posing a threat to Turkey's national security, saying: "I know recently you have also been uncomfortable with the matter of this terror curse, but do not forget this: You shall know that there is no victory for cowards. Do not assume that they [the terrorists] are strong. The operations we have been carrying out are not temporary."

Having firmly echoed Ankara's determination to combat terror of any kind, Erdoğan went on to criticize those lending a hand to terrorists in any way: "They cannot make us go off track. The terrorist organizations are at their back. We have Allah and the people by our side. We are marching with our people and with you. Do not have any worries in this regard. Those who back them [the terrorists] and mastermind them will be defeated sooner or later."

As President Erdoğan and Prime Minister Ahmet Davutoğlu's statements about fighting terror in the country arrive at the media outlets on a daily basis, reports claim the PKK has been hurt badly by the operations both by way of airstrikes and police raids in different provinces.

According to statistics released by A Haber, 190 PKK targets have been destroyed following airstrikes launched by the Turkish Armed Forces (TSK). In addition, 390 PKK terrorists have been killed and more than 400 wounded in operations targeting seven different camps. More than 120 fighter jets have participated in the operations, resulting in the deaths of some senior PKK figures.

Overwhelmed by the operations, the PKK has changed its plans, focusing on urban assaults. The PKK has given orders to escalate tension in urban areas to manipulate public perception. However, after Ankara intensified the efforts to fight terror at home, more than 1,600 suspects have been detained, 340 of which have been arrested.

Furthermore, in the wake of the TSK airstrikes, nearly one-third of the militants left the camp. Some senior figures, including Murat Karayılan, fled to Iran while others stayed in the camp. Meanwhile, the many have hidden themselves in Jazira canton in northern Syria.

Heavily damaged by the operations, the PKK leadership in northern Iraq's Qandil Mountains has taken a step back. According to sources close to Daily Sabah, recently there have been two attempts by the PKK leadership to seek a cease-fire.
Last Update: Aug 15, 2015 1:07 am
RELATED TOPICS