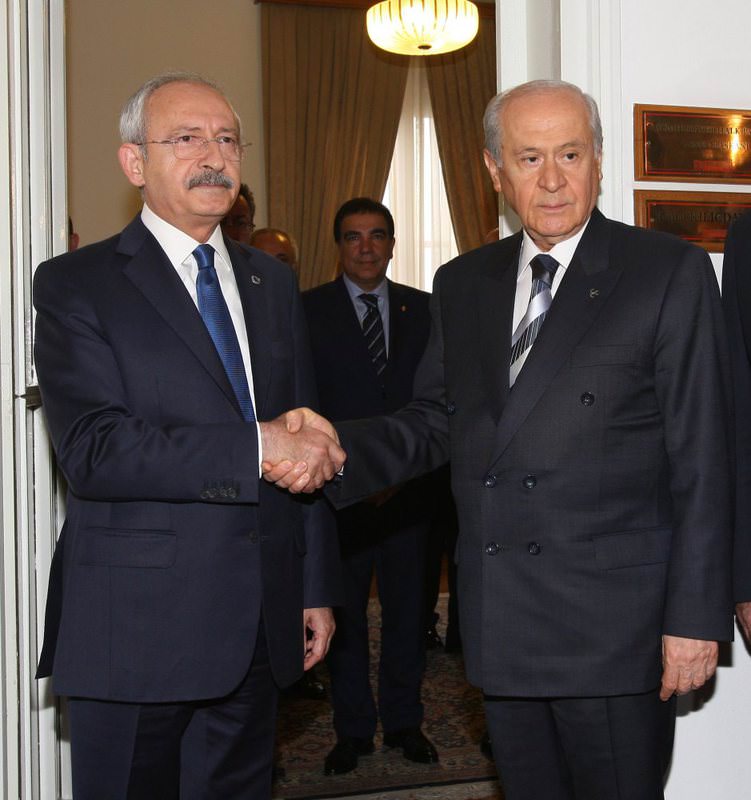 Following the failed coalition talks with the CHP, PM Davutoğlu commented on the MHP chairman's reluctance to form a coalition government and said: ‘If there is no potential to reach a consensus and establish a coalition then snap elections are the only solution'

Following the failed coalition talks with the main opposition Republican People's Party (CHP), Prime Minister Ahmet Davutoğlu on Friday commented on the Nationalist Movement Party (MHP) chairman's reluctance to form a coalition government and said, "If there is no potential to reach a consensus and establish a coalition, then a snap election is the only solution."

Addressing Justice and Development Party (AK Party) members at a meeting marking the 14th anniversary of the founding of his party, Davutoğlu said the AK Party administration is beginning a "new journey," that is heading to an early election. Criticizing the MHP leader's conditions for starting coalition negotiations, Davutoğlu said no one is in a position to "give everyone a lecture."

Prime Minister Davutoğlu requested a meeting with MHP Chairman Devlet Bahçeli on Thursday after the final round of coalition talks between the AK Party and the CHP failed. However, Bahçeli reiterated that he would not be part of any coalition negotiations unless the AK Party accepts his demands to completely end the reconciliation process with the PKK and on the condition that Davutoğlu keeps his distance from President Recep Tayyip Erdoğan.

Davutoğlu's AK Party had been seeking a coalition partner after no party won a simple majority in the June 7 general elections, but Davutoğlu announced earlier on Thursday that no agreement to form a coalition government had been made with CHP Chairman Kemal Kılıçdaroğlu.

Davutoğlu's request was submitted to Bahçeli in the evening hours of Thursday, Prime Ministry sources said. Davutoğlu had met with Bahçeli on July 14 as part of the first round of coalition talks. Following the meeting, Davutoğlu told reporters that the MHP had opted not to take part in a coalition government. "[Bahçeli] spoke to reiterate his stance of staying out of a coalition partnership," he said, adding that the two agreed to meet again during the second round if needed.

Bahçeli issued a written statement on Monday, calling for an immediate formation of a coalition government between the AK Party and CHP: "These two parties should not avoid taking the huge responsibility that history has placed on them and should show their will and attention to form a government in line with national interests."

He also urged the two parties to hold coalition negotiations "without behaving reluctantly or having imaginary discussions involving infertile standoffs."

While speaking at the press conference on Thursday, Davutoğlu made it clear that the talks with the CHP ended unsuccessfully saying: "Snap elections have become the only option for Turkey. It is obvious that the AK Party and CHP have deep conflicting opinions. This is only natural. We have come to the conclusion that the groundwork for a government partnership has not materialized." He cited "profound differences, mainly in foreign policy and education," as reasons for the failure to materialize a coalition.

A senior AK Party official has said the chances of a coalition with the MHP are "very slim" and that early elections in November are highly likely. Davutoğlu has called his party's Central Executive Board (MYK) for an emergency meeting following the final meeting with Kılıçdaroğlu.

Davutoğlu also said at the press conference that the perception that Erdoğan did not want a coalition was "completely false." Erdoğan told a reception for local community leaders at the Presidential Palace in Ankara on Thursday: "We tried, and are trying, to keep our hope for the formation of a coalition government, which will put forward solutions to issues."

Davutoğlu expressed his satisfaction with the process carried out in a civilized and polite way with mutual understanding that left no room for offensive remarks from either delegation.

In response to a question about whether the AK Party will hold a meeting with the MHP, Davutoğlu said: "I said in the beginning that we are not going to cut off communication with any party. If needed, we are going to hold a meeting. After reviewing the situation [with the CHP], we may consider that. We are in a place where everyone should take responsibility. I will do anything [I should] as I am given the mandate to form a government."

Touching on the alleged tension in politics between parties, Davutoğlu blamed the pro-Kurdish Peoples' Democratic Party (HDP) for being indecisive on the PKK, saying: "There is no tension in politics at all except for the HDP. The reason for this is the indecisive behavior of the HDP over terror incidents. We call on them to condemn the attacks."

Turkey went to the polls on June 7 to choose its lawmakers for the country's 25th Parliament, shaping the future of Turkish politics. The two significant outcomes of the elections were that the AK Party, which was vying for a fourth term of single-party power, had a clear victory but failed to secure the 276 seats required to form a government single-handedly, and the HDP attempt to pass the 10 percent national election threshold to make its way into Parliament, crushing the hurdle and receiving 80 seats in the chamber. Although the AK Party got the most votes, receiving 40 percent, roughly 15 percent more than the CHP, which received the second highest number of votes, some interpreted the elections as an AK Party failure as its rate dropped 8 percent from the 49 percent it received in the 2011 general elections. Since the bare minimum to retain a simple majority in Parliament was not achieved, the AK Party started looking for a coalition partner to form a government, which appeared to be a tough undertaking, taking into consideration the rigid differences between the policies of the parties in Parliament.

The MHP won 80 seats in Parliament, and combined with the AK Party's 258 seats, the two parties could easily forge a coalition and parliamentary majority.

When the deadline to form a government expires on Aug. 23, either Erdoğan or Parliament can decide to hold early elections. If the president issues the decision, then polling is supposed to be held the first Sunday following a 90-day period starting from the end of the first deadline.

However, if Parliament makes the decision for a new election, then the Supreme Election Board (YSK) can cut the 90-day period by as much as half.

The last coalition talks in Turkey were held 16 years ago when the Democratic Left Party (DSP) of late Prime Minister Bülent Ecevit failed to win a majority in the general election on April 18, 1999.
RELATED TOPICS