Turkey was not informed about US airstrikes in Syrian Atmeh town, says official 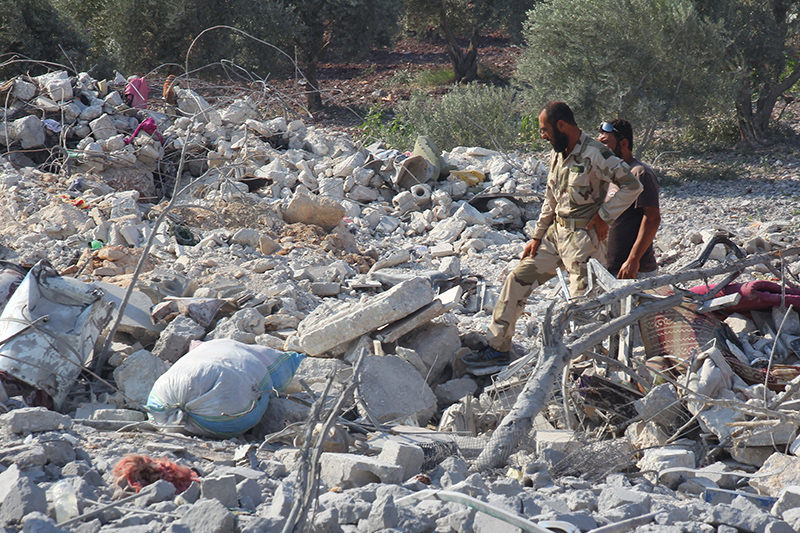 Rebel fighters from ,Jaysh al-Sunna, inspect the damage at a weapons factory operated by them that was targeted in what activists say were U.S.-led air strikes on Atmeh village in Idlib countryside August 12, 2015 (Reuters Photo)
by Daily Sabah Aug 15, 2015 12:00 am
Turkey was not informed by the U.S. about coalition air strikes on Syria's Atmeh town, a Turkish government official said.

"The US did not inform Turkey about the coalition air strikes that hit northern Syrian town of Atmeh," said the official on Friday, who spoke to TRTWorld.com on the condition of anonymity.

Although as NATO allies Turkey and the U.S. have signed an agreement to coordinate air strikes against the terrorists in Syria, the air strikes were carried out without the prior knowledge of Turkish authorities.

The town of Atmeh, which is located less than a kilometre away from Turkey's border with Syria was hit by airstrikes on July 11, resulting in civilian casualties. It was claimed by Syrian opposition sources that the alleged US-led coalition airstrikes killed more than a dozen civilians. In addition, the allegations by a Syrian opposition group claimed that the airstrikes were conducted by a U.S.-led coalition fighter jets that took off from İncirlik Air Base in Turkey and further claimed that airstrikes destroyed an arms depot belonging to Jaysh al-Sunna which reportedly does not have ties with ISIS or the Nusra Front.

In response to the claims Foreign Ministry officials published an official statement denying the allegations. The statement from the Foreign Ministry said: "In regard to the alleged airstrikes on targets near the Syrian town of Atmeh, no manned or unmanned coalition air forces have participated taking off from İncirlik Air Base or any other Turkish air bases. Any allegations contrary to the official statement are purely delusive and malevolent."

In early July, Ankara agreed to allow U.S.-led coalition forces to launch airstrikes in the fight against the Islamic State of Iraq and al-Sham (ISIS) from İncirlik Air Base, which is located near Turkey's border with Syria, along with three other air bases. In this regard, a Syrian opposition group called Ahrar al-Sham declared its support for the Turkey-U.S. plans to create a safe zone in northern Syria saying it "will have positive repercussions on the humanitarian, political and military levels," after the al-Qaida-affiliated al-Nusra Front rejected Turkish-American cooperation in the area.

The Free Syrian Army (FSA) commanders have also given support to Turkey as the group mostly suffers from ISIS attacks during its battle against the regime.
Last Update: Aug 15, 2015 10:34 pm
RELATED TOPICS