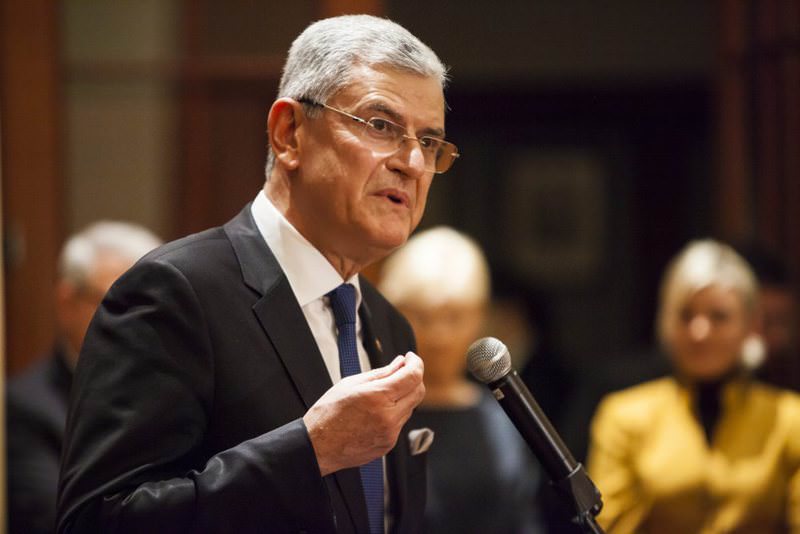 EU Minister and Chief Negotiator Volkan Bozkır on his two-day trip to Germany gave German daily Tagesspiegel an interview regarding several issues including creating a safe zone in Syria, the PKK and relations between Turkey and Germany. Bozkır reiterated Ankara's agreement with the U.S. to create a safe zone in northern Syria, where Turkey plans to build houses, schools and infrastructure for returning refugees.

Over the course of the weekend, Bozkır visited the German capital Berlin following his visit to Vienna where he met with European Enlargement Commissioner Johannes Hahn. In Berlin, Bozkır held a meeting with German Minister of State Michael Roth, followed by meetings with officials from the Bundestag.When asked about what his agenda was for his visit to Germany, Bozkır said that he and Roth mainly talked about the region, the fight against terrorism, refugees, the PKK and the Islamic State of Iraq and al-Sham (ISIS). Bozkır also emphasized that the talks were "very fruitful" and Ankara's expectation regarding cooperation against terrorism has been reinforced.

Having ruled out the claims with regard to an alleged contradiction between Ankara and Washington on creating a safe zone in Syria, Bozkır said: "There is no disagreement with Washington. There is an agreement with the U.S. whose fighter jets take off from İncirlik Air Base to combat ISIS in an attempt to create a safe zone. They have already started the mission. There is a second agreement between us and the U.S. along with coalition forces, to which Germany belongs as well, to clear out this region. We train unconventional forces in Turkey and elsewhere in order to fight ISIS."

Bozkır also explained on a map showing the Turkish-Syrian border where Ankara wants to create a safe zone together with the U.S.-led coalition. "We are going to establish a safe zone in the region that is currently held by ISIS," Bozkır said.

The misconception in Europe regarding the fight against the PKK terrorist organization was another point covered in Bozkır's interview. In response to a question about whether it is suitable to fight the PKK and ISIS at the same time, Bozkır clarified Ankara's stance on terrorist organizations, saying: "We do not only have the PKK and ISIS, there is also the far-left Revolutionary People's Liberation Party-Front [DHKP-C]; all terrorists are the same in this respect. In Europe, however, there is a notion of evil terrorists and not-that-evil terrorists. The not-that-evil terrorists are those inflicting damage in other countries."Bozkır responded to reporter's accusation of Turkey not doing enough against ISIS, saying: "If anyone says that we are not doing enough, is there any other country that does more than we do? We are doing more than any other country. No other country takes direct military action. Can you tell me what a European country has done against ISIS that Turkey has so far refrained from doing?" Turkey detained hundreds of ISIS-linked suspects and barred the entry of some 14,000 foreign citizens. The Turkish Armed Forces (TSK) has recently hit ISIS targets in Syria.

With regard to the PKK, Bozkır underlined that it was the Turkish state initiating a reconciliation process: "The PKK's terror has cost 30,000 lives. Despite all the problems over the years, when our country thrived, Kurdish regions profited from it as well. Kurds can live their culture and speak their language. We have started a reconciliation process with the PKK."

In addition, Bozkır called on pro-Kurdish Peoples' Democratic Party (HDP) Co-Chair Selahattin Demirtaş to say that the PKK is a terrorist organization and ask for the PKK to lay down arms and leave the country. Bozkır said: "Ask Mr. Demirtaş. If he accepts the terms, I will step down from my ministerial position as EU minister."
RELATED TOPICS