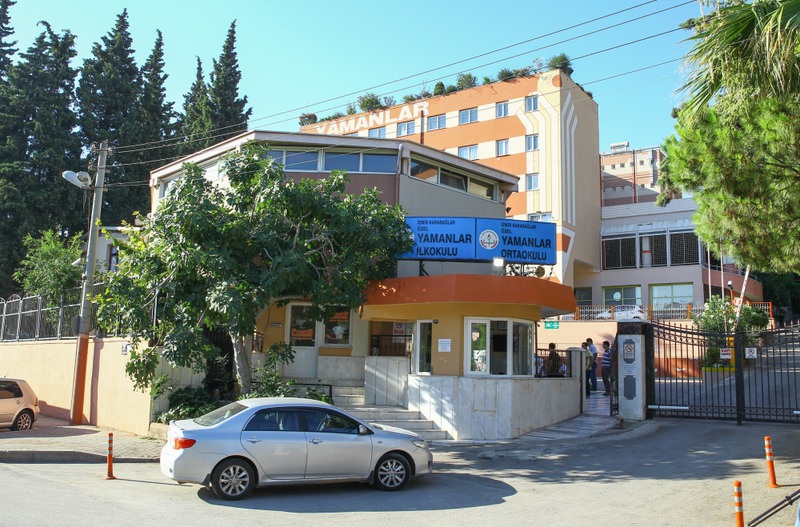 The exterior of a school operated by Gu00fclenists. The Yamanlar College was among schools raided by police yesterday in an operation against the Gu00fclen Movement.
by Daily Sabah Aug 19, 2015 12:00 am

The security forces extended dragnet against the "parallel state," -the name given to the covert network of controversial Gülen Movement- to schools linked to the movement in the western city of İzmir yesterday. On the orders of the prosecutor's office, police raided 29 schools in the city and detained nine suspects accused of aiding and abetting a terrorist organization and fraud and forgery in official documents. All detainees are executives at schools affiliated with the Gülen Movement. The prosecutor also issued a detention warrant for six other suspects who remain at large. The movement, now referred to as the "Fethullahist terror organization" in investigations, after its leader Fethullah Gülen, is accused of attempting to overthrow the government through its infiltrators in the police, judiciary and bureaucracy.

In the early hours of yesterday, police squads searched the schools for evidence of financial fraud and other possible illegal activities of the movement. Eight suspects have been charged with forgery of official documents such as forging a false approval of schools' compliance with fire safety rules and unlawful expansion of school facilities among other charges.

One of the places the police raided was Yamanlar College, a renowned school linked to the movement. The police searched a room at the school once occupied by Fethullah Gülen himself before he left for Pennsylvania, in the U.S., where he currently resides. The room was later allocated to Bekir Baz, an "imam" or point man for the Gülen Movement for İzmir and other cities in western Turkey. Baz was coordinating the movement's activities in the region including blackmailing and threatening local officials to work for the interests of the movement, according to media outlets. Like Gülen, Bekir Baz moved to the U.S. last year after the government stepped up operations against Gülenists.

Schools linked to the Gülen Movement are used as recruitment hubs by the movement, which, through its connections within the state, wields significant clout in Turkey. Gülenists now face a massive purge thanks to the government efforts to weed out the movement's followers from state institutions.

Security forces have launched a nationwide clampdown on Gülenists this year with operations targeting NGOs and schools linked to the movement becoming almost a daily routine. They are mostly charged with financial crimes such as running a fundraising scheme that funneled the funds collected for charitable causes to the movement's activities.
RELATED TOPICS