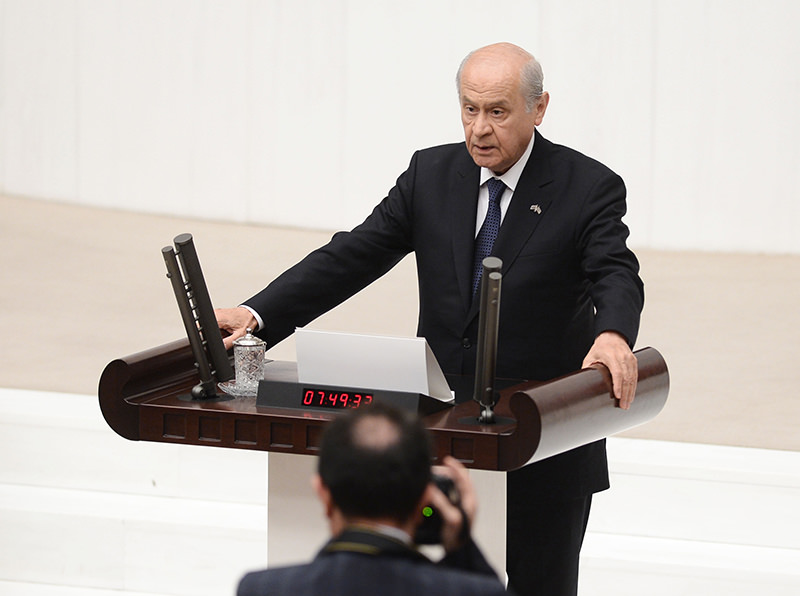 by Anadolu Agency Aug 20, 2015 12:00 am
The chairman of Turkey's Nationalist Movement Party (MHP) has called for the imposition of martial law in the face of spiraling violence.

Devlet Bahçeli called for emergency powers to be adopted under Article 122 of the constitution, which allows martial law for up to six months in regions where violence is "aimed at the destruction of the free democratic order or the fundamental rights and freedoms embodied in the constitution".

"It is obligatory to impose safety through martial law, which will encompass some parts of the country where violence and terror exist," Bahçeli said in a statement.

He also called for plans to hold a fresh election to be called off in light of the renewed conflict with the PKK in southern and eastern Turkey, where around 50 security forces personnel have been martyred since July 20.

On Wednesday, eight soldiers were martyred in Siirt province when a roadside bomb went off as their patrol passed.

"The issue of renewing the election must be revised," Bahçeli said. Turkey is expected a rerun of the June 7 general election in early October after the Justice and Development (AK) Party was unable to form a coalition government.