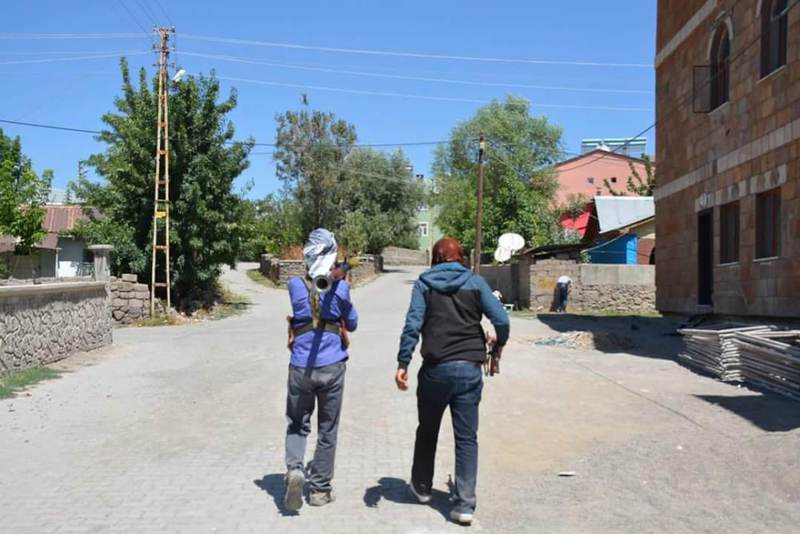 While the PKK sends suicide bombers into cities, the terrorist organization continues deadly attacks on both security units and civilians. Terrorism experts say the PKK did not have a real commitment to a solution and it reserved large amounts of ammunition before it ended the cease-fire on July 11

Turning down the opportunity to pursue its cause as a political actor, the outlawed PKK opted for breaching the cease-fire that has been in effect for nearly two years, plunging Turkey into unrest by carrying out terrorist attacks that have so far killed more than 30 security staffers as well as a many civilians.

The escalating violence perpetrated by militants has prompted fears of a return to the 1990s during which the conflict between the PKK and the government was at its peak. The tactics of the militants, which were based on ambush, protests and sabotage against the government in the early 1980s, expanded into armed attacks such as bombings, assassinations and suicide attacks during the 1990s and early 2000s. It was not until 2013 that a reconciliation process between the government and the PKK was launched to end the Kurdish question and insurgency that had claimed more than 40,000 lives over three decades. Yet despite the efforts exerted by the government to reach a settlement, the PKK occasionally broke the conditions of the cease-fire announced by the insurgents' incarcerated leader, Abdullah Öcalan, in 2013 during an annual Nevruz message. Ankara, however, did not reciprocate the attacks and provocative statements from senior PKK figures for fear of hurting the fragile reconciliation process.

Now that the process is on ice, as said by President Recep Tayyip Erdoğan on Aug.11 in a speech at the Medal of Honor awarding ceremony for outgoing Chief of General Staff Gen. Necdet Özel, the PKK has ratcheted up the violence using suicide attacks, which is a strategy that has not been used by the group for some time.

On July 20, a suicide bomber who has been claimed to be an Islamic State of Iraq and al-Sham (ISIS) militant killed 33 leftist activists that were planning to cross to Kobani, Syria from Şanlıurfa's Suruç district to help with the town's reconstruction. The incident sparked a burst of violence by the PKK against Turkish security officers, the first of which was the killing of two police officers in their home a day after the Suruç attack. That was when Ankara decided to launch ongoing airstrikes against PKK camps located in northern Iraq's Qandil Mountains.

Since then, the PKK has conducted four suicide attacks in an apparent bid to sow fear among the public.

On July 31, the militants carried out a suicide attack against a police department in the province of Adana. Two police officers and two terrorists were killed as a result. On Aug. 3, PKK terrorists attacked a Turkish military armory with rocket launchers in the district of Doğubeyazıt in the southeastern province of Ağrı.

The armory was attacked with rocket launchers and a short clash broke out between the PKK and Turkish security forces, which retaliated immediately to the violent attack. On Aug. 6, a suicide bomber drove a vehicle filled with a ton of explosives, killing only the perpetrator. The PKK claimed responsibility for the attack and announced that it was carried out in retaliation for the those who died during the airstrikes against the militants. On Aug. 10, the PKK launched a suicide attack on a police station in the Fatih district of Istanbul, leaving one officer dead. The suicide bomber detonated a vehicle loaded with ammunition causing a huge fire that seriously injured three officers. One of the officers and two terrorists were killed as a result of the clash that erupted following the attack.

Suicide bombing, a powerful strategy used by terrorist organizations including the Islamic State of Iraq and al-Sham (ISIS), has once again come to the fore over the last month. The PKK seems to have returned to this efficient strategy of instilling fear in society, presumably inspired by ISIS' skill in conducting such attacks. Experts consider suicide bombing as an effective terror ploy that spreads skepticism and increases frustration among the public. A suicide bomber does not need to have an escape plan and it guarantees coverage in the media, which counts for a lot as it serves the terrorist group's purpose of intimidating a community. Not to mention the technique's effectiveness in killing a large number of people at the same time.

They stockpiled the explosives and garnered supporters during the reconciliation process. While Turkish security forces believed a resolution could be reached, the PKK knew they would never make peace with the government. They prepared for today.

Baki Kaya, former staff colonel in the Turkish army, explained: "Suicide bombings have always been used to spread terror. There were over 50 suicide attacks carried out by the PKK between 1990 and 2000, one of which happened in the officers' club in Van where I was on duty. The PKK has proven it can terrorize people like ISIS does." Kaya also drew attention to how tons of explosives that were used in the PKK's recent suicide attacks could be brought to Turkey within such a short period of time. He claimed the ammunition and weapons were being reserved in Turkey.

"They stockpiled the explosives and garnered supporters during the reconciliation process. While Turkish security forces believed a resolution could be reached, the PKK knew they would never make peace with the government. They prepared for today," Kaya said.

He added: "There is now a false view that is being propagated by the PKK that they fight for Kurdish rights and that the government is reluctant to give them to the community."

Kaya recalled that Ankara had already restored almost 90 percent of the community's rights after decades of apathy, but he said that while the PKK successfully campaigned to be recognized as the defender of Kurdish rights, the government "failed to sell its initiatives."

"May 1 [Labor day] was forbidden in 1908, and also in 2008, but the AK Party [Justice and Development Party] during its term lifted the ban on its celebration, and could not even tout that step," Kaya said.

Can the reconciliation process get back on track?

Since it was launched as a democratization initiative, the reconciliation process has always been on shaky ground due to various provocations, but Turkey truly believed a new page was turned when Öcalan, during his latest annual Nevruz message this past March, called on the PKK to convene to discuss abandoning arms, a call that was never brought to fruition.

Despite the call, the PKK resisted laying down arms even after the pro-Kurdish Peoples' Democratic Party (HDP) passed the 10 percent national election threshold and entered Parliament, casting doubts on sincerity in pushing the process forward.

Expressing determination in carrying out the operations against the PKK, Erdoğan said last week that Turkey will continue its fight against terrorism "until no terrorist is left within its borders." He said it was not enough just to "silence the weapons" but that they should also be "buried."

An expert in PKK terrorism and an academic at TOBB University of Economics and Technology, Nihat Ali Özcan said the increasing attacks, which also include suicide bombings, aim to "wear down the government" and make sure their demands are met, which he sayd is confederacy.

"All peace processes aim to reach a resolution. When the PKK understood their demand for self-rule would not be met, they ended the cease-fire," Özcan said. He said that it was a hard task for Ankara to keep the balance between preserving support from its base and at the same time fulfill at least some wishes of a minority.

Özcan said the HDP was the one to "reap the fruits" of the reconciliation process, as it entered Parliament as a party by receiving 13 percent of the vote. But, he warned, if the PKK wants the HDP to preserve the votes it received in the June 7 elections in a possible early election, the PKK has to "take its finger off the trigger."

Since the elections the HDP has been stuck in limbo and has been trying unsuccessfully to satisfy both the PKK and electorate that voted for the party who believe in its pursuit of peace. The inconsistency was reflected in the party member statements, which are both supportive of the PKK and also denounce the violence. The party has also been facing intense pressure by government officials since the elections. When the HDP Co-Chair Selahattin Demirtaş finally said that the PKK should lay down its arms, he also said it was not up to him or his party to make the call as they do not have any influence over the PKK to make it happen. His remarks, which were made during an exclusive interview with a Turkish news channel, followed a well-founded question by Prime Minister Ahmet Davutoğlu who asked a day after Demirtaş's statement: "What contribution do you seek to make to the reconciliation process as a mediator unless you have an influence on the PKK?"

Although the HDP tries to detach itself from the PKK, why it does not stringently condemn the recent terrorist activities still remains a crucial question hanging over the matter.

Speaking to Deutche Welle on Aug. 9, HDP Co-Chair Figen Yüksekdağ said the PKK is not a terrorist organization, sparking criticism. She said: "The PKK is a national liberation movement and also an organization that stands for democracy and equality. We do not agree with the means they use to attain their goals, but we must recognize the fact that their policies are not terrorist policies."

Time will tell whether the HDP and the state will return to the negotiating table to end the conflict, but it seems clear that the government will not cede its condition of PKK disarmament to restart peace efforts.
Last Update: Aug 20, 2015 1:26 am
RELATED TOPICS